Manchester Beer and Cider Festival 2017: even bigger and better than last year

Manchester Beer and Cider Festival is back for its second year at Manchester Central, a more convenient, if less idiosyncratic, venue than the velodrome. The four day extravaganza always manages to attract beer lovers and afficionados from far and wide and remains reassuringly CAMRA.

This is a beer festival rather than a street food market, but nuts and crisps aren’t enough to sustain a serious session. This year’s event boasts eight food stalls providing enough pies, burgers, hot dogs and other hearty dishes to do the job.

This is a CAMRA festival so most of the beers are cask (although the key keg range has expanded on last year) – a method of dispense that’s been hotly debated of late. With Cloudwater’s recent announcement that they’ll be dropping their cask range, MBCF claims to be home to some of their last ever cask beers.

Without wading into the debate, I see their logic and appreciate the transparency. In terms of trendiness, cask is somewhat lacking compared to its carbonated brother.

To  make a crass comparison, I drink more bad beers at CAMRA festivals than I do at Indy Man Beer Con, for example. By bad I mean beers that are clearly below par or beers that are just undrinkable. I’ve always tried to avoid the beers on gravity drop. 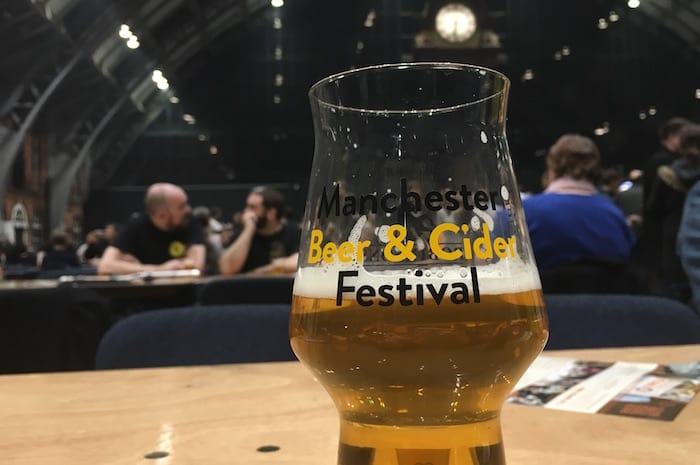 There are lots of big variations between the two but they sit at either end of the dispense spectrum.  For me, keg is more consistent and dependable but not necessarily better.

At the Thursday evening session, I tried both of Cloudwater’s cask beers. The To Øl collaboration was a sweet treat but a silly choice for starters. The humble pale ale, however, was creamy, crisp and sessionable – a perfect pint.

Cask may be hit and miss, but when it’s a hit its hard to beat. But to move on from this beery, hot potato, the event does bring together a great selection of UK and European beers – none further afield this year – in what could be construed to be a two fingered gesture to Brexit.

The Manchester Beer and Cider Festival may not be glitzy but it’s honest, charming and doing its best to remain relevant by relaxing its stance on keg beers.

With an exceptional amount of great breweries to choose from, it’s hard not to get swept up in the excitement of stalking the bars for something special.

Say what you will about appearances, but this CAMRA beer festival is getting better and better each year.