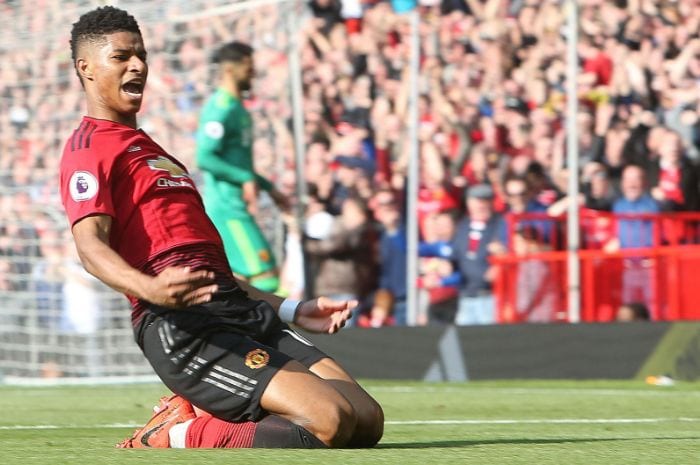 It was all smiles at Old Trafford on Saturday in what was Ole Gunnar Solskjaer’s first match as full-time manager of Manchester United. There’s nothing caretaker or temporary about it now.

Ole’s at the wheel and it’s the appointment that most United fans wanted. I say most, as there is still the odd fan questioning his pedigree at the highest level. Not many though.

The pre-match atmosphere before the visit of Watford was everything you’d come to expect under this regime. It was all smiles with a giant “20 Legend” banner making its way across the Stretford End as the teams entered the stadium.

Gone were thoughts of two defeats on the bounce including a disappointing FA Cup exit. And this performance showed a lot of the good things under the new manager.

Marcus Rashford’s much improved finishing was in evidence again, as was the level that Luke Shaw now finds himself playing at week in week out. United also showed just how good they are on the counterattack, with both goals coming against the run of play.

What was also clear is a slink chink in the armour of Ole and his coaching staff. They’ve not yet found out how United should play at home.

They’re devastating away from home in the most part. The wins against Chelsea, Arsenal, Spurs and PSG are evidence of this. But this is all about quick breaks, Paul Pogba carrying it from deep and supreme movement from the forwards.

At home when they have to dominate the opposition it’s not quite there yet. This was the case against Southampton, Burnley, PSG and now Watford.

This arguably won’t matter so much when United host City at Old Trafford in mid-April as Pep Guardiola’s team will be allowed to hog possession, but it will likely become a factor eight days later in the vital home game against Chelsea.

Ole often speaks at length about the history of the club and how they used to play during his time as a player. Well at home, teams were swamped from the first whistle. Play was switched quickly, and the forward players knew how to break down a packed defence.

Everyone got a hiding at Old Trafford at some point under Fergie. And teams were scared. United also won games when not playing well. Which at least they’re managing to do now.

In fairness to Ole, he’s doing the best he can with the players at his disposal. What this squad doesn’t have is additional quality in midfield to dominate games and pick apart opposition defences. That’s where additions are needed in the summer.

The limitations of Nemanja Matic and Ander Herrera were again highlighted on Saturday by the power in Watford’s midfield. Pogba needs a bit of quality alongside him in that area of the pitch.

An injury-prone Gareth Bale is not the answer. Ole knows better than that.

The club have illustrated their backing with giving him the job. Now they need to do it with the chequebook in the summer.

In his short time at the helm, he’s passed pretty much every test that’s been thrown at him with flying colours. The summer is a major test. But as we know from his playing days and the early indications of his managerial rein, he can be ruthless when he needs to be and he’s not afraid to make the big decisions.

He’ll cut a player lose if he feels he’s not good enough. He’s the first United manager in five, if you include Ryan Giggs, that knew Marouane Fellaini really shouldn’t be at the club.

To me, it’s no surprise that Herrera’s contract is being allowed to run down. I don’t think he’s Ole’s man. He’s just making the best of what he has. A replacement should already be lined up.

He needs to convince David de Gea to stay (with financial backing from the club) and sort out the Alexis Sanchez situation. Then he’ll need to prove he can identify the right players and integrate them into the team to hit the ground running next season.

And that’s all after navigating the huge incoming test that is a Champions League quarter final date with Barcelona and Lionel Messi.

It’s a big few months ahead for Ole. But you know he’ll be enjoying every minute of it.