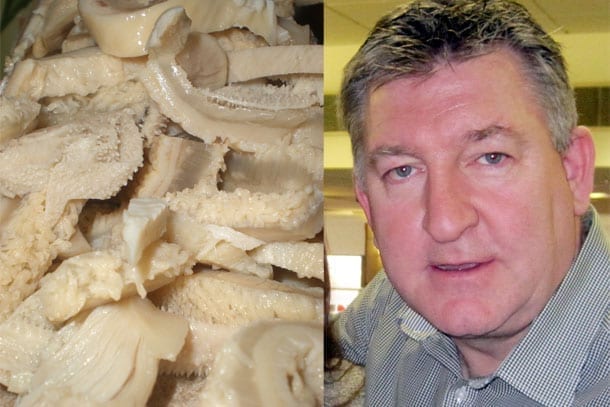 Manchester is about to get its first tripe restaurant in over 40 years. Mondongo will specialise in nose to tail eating-cooking every part of an animal so that nothing is wasted-and its signature dish will be tripe.

“WE’LL BE SERVING TRIPE IN AT LEAST
40 DIFFERENT WAYS…”

Mondongo is the brainchild of Man United legend Norman Whiteside.

“Tripe is considered a delicacy in many parts of the world like Mexico, Spain and Wigan but for some reason we turn our noses up at it,” says Mr Whiteside, who made his debut for the Reds at the age of 16 and is the youngest player ever to play in a World Cup final tournament.

“In London there’s no shortage of restaurants which serve tripe. But for some reason there’s not much choice in Manchester. I spend a lot of time here but apart from Chinatown there’s nowhere I can get it. I love Chinese food as much as the next person but it would be nice to eat tripe prepared in other ways. When Mondongo opens in the Northern Quarter later in the year I know there’ll be somewhere I can dine with my friends when we’re on a night out in Manchester.

“We’ll be serving tripe in at least 40 different ways including the traditional Lancashire way-served raw with vinegar or stewed in milk and served with onions.

“But having travelled round the world as a footballer I know there are lots of other ways to prepare tripe. There are some fantastic tripe dishes out there and we’ll be serving as many of them as we can. I’ve called the restaurant Mondongo because it’s the name of my favourite dish-a Puerto Rican tripe stew.”

Tripe is the stomach lining of a cow, ox or other ruminant and used to be an extremely popular dish in the North West but fell out of favour as people became increasingly affluent. At one time there were 146 UCP shops and restaurants serving tripe in Lancashire including one on Market Street, but the last one closed in 1972.

A Tripe Marketing Board spokesperson said, “We’re delighted. Tripe sales have been on a bit of a downward curve since the end of the war but there are signs that the tide is turning. A couple of years ago, Solita tried to rebrand tripe as Lancashire calamari but I believe sales were disappointing. They made the fundamental mistake of trying to disguise tripe. We think it’s finally become cool again and what better place to open a tripe restaurant than Manchester, the capital of cool.”

“We won’t hide the fact that we’re selling tripe nor will we disguise it,” says Mr Whiteside. “In fact we’ll probably hang sheets of tripe in the window like they did in the old UCP restaurant on Market Street.

“It’s time this great Lancashire delicacy was put back on the menu. I believe the time is ripe for tripe. But don’t worry if you’re not a fan. The whole point of nose to tail eating is that nothing is wasted so we’ll also be serving dishes such as cow foot stew, calf’s brain and boiled sheep’s head. And there’ll be a special room where parties of at least 12 people can eat an entire pig. If everything gets eaten-and we mean everything-it’s on the house.”