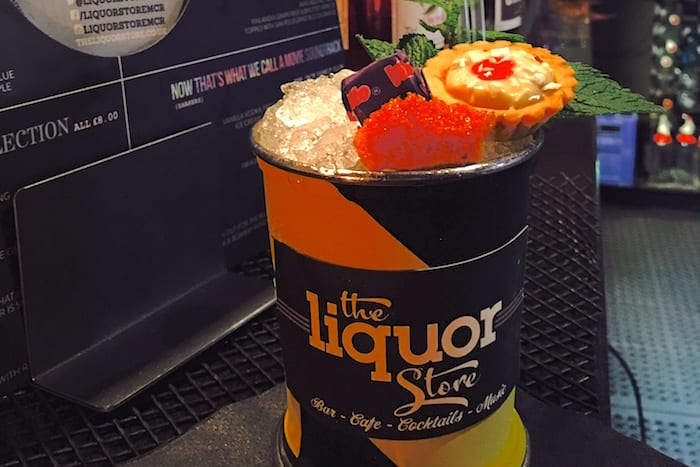 Ever imagined taking all of your favourite Manchester things and bottling them into one? And no, we’re not talking Liam Gallagher’s slurring ‘sunshiiiiiine’ lyrics or Ian Brown’s bucket hat. We’re talking all of the iconic flavours that have come to symbolise this fair city and amalgamating them into one seriously tasty cocktail.

“…a cocktail that combines all of Manchester’s tastiest flavours and a nod to the city’s great history and iconic musical moments.”

To celebrate the opening of their new venue on First Street, popular city centre bar The Liquor Store have devised a dynamic explosion of flavour to call their own – the ‘Made of Manchester’ cocktail.

Combining Manchester’s home grown Three Rivers gin, which famously represents the waterways that flow through the city and gave rise to the Industrial Revolution, with Vimto one of the North’s most famous fruity exports, the cocktail boasts an infusion of tangy flavours with a modest Mancunian twist.

A nod to the city’s worker bee symbol comes with the inclusion of honey syrup from none other than the Happy Mondays’ dancer and all-round Madchester icon, Bez, whilst the taste of the Manchester Tart is evoked by the inclusion of vanilla syrup. All of this mixed together with manzana verde, apple juice and orange curacao, to create one truly Manc cocktail you’d be mad not to try.

To claim its position as the most Mancunian cocktail in existence, Made of Manchester comes served in a copper julip tin, decorated in Hacienda tape and garnished with a small Manchester Tart, mini Vimto chew bar and sprinkle of honeycomb.

A vision of The Liquor Store head barman and award-winning mixologist, Danny (or Biggsy to those in the know), Made in Manchester will be available from 8 October when the bar opens its doors at its new home on First Street.

A sister venue to its original Deansgate home, The Liquor Store brings another no-nonsense oasis to its new home with great music, hearty, unpretentious drinks and a cool vibe.

“We wanted to create something special to mark the opening of the new Liquor Store, but something true to our Manchester roots and that’s exactly what we’ve got with ‘Made of Manchester’” says Biggsy.

“A great tasting cocktail that combines all of Manchester’s tastiest flavours and a nod to the city’s great history and iconic musical moments.”

Be the first to try the Made of Manchester cocktail when The Liquor Store opens its doors at First Street on Saturday 8 October.