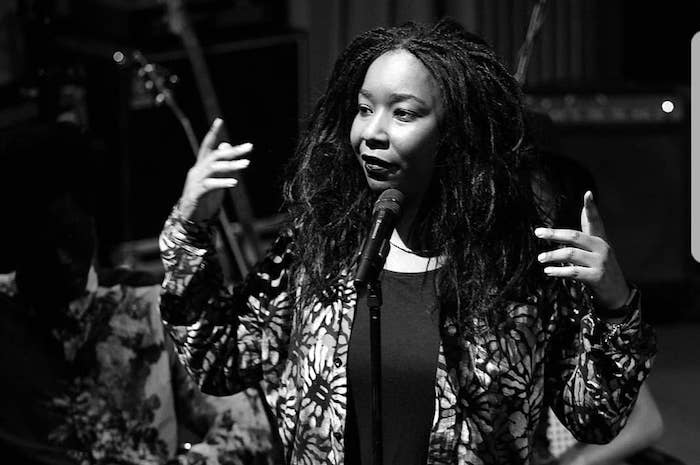 Manchester is not the most stereotypically poetic city. It is gritty rather than graceful, bustling rather than beautiful.

But those qualities are part of what gives the place its charm – and it’s inspired a number of poets over the years.

Think of punk poet John Cooper Clarke, Tony Walsh with his moving This Is The Place, ARGH KiD and Manchester’s Sprawling, Michael Symmons Roberts’ collection Mancunia which was shortlisted for the TS Eliot Prize last year – and even lyricists like Ian Curtis and Morrissey.

Now a new poem by local performance poet Nicole May is being broadcast by BBC Radio Manchester today for National Poetry Day. She’s one of 12 poets commissioned by BBC Local Radio to write in response to the theme of ‘change’ in their region.

The poem, A Rucksack and a Journey, mentions ‘86 bus journeys from Piccadilly Gardens’, ‘raving to Levels just off the Curry Mile’ and ‘Karaoke Saturdays at The Angel Pub’.

The other poets who have been selected include Rowan McCabe, a travelling poet who recently did a run of door-to-door poetry through Salford and lived to tell the tale.

“Poets have a special role to play in noticing change, for they catch so much that escapes the attention of pollsters and statisticians. They transform. Even everyday words, when set in memorable poems, take on new resonance,” says Susannah Herbert, director of National Poetry Day.

Nicole is no stranger to the power of poetry to provoke change in Manchester. As a director of Young Identity, the city’s hugely successful creative writing and performance organization, she regularly delivers workshops to share her art with others.

And she’s worked with the likes of Lemn Sissay and internationally acclaimed Kate Tempest – so her latest commission is set to be popular.

“I was so excited to be commissioned to write a poem on the theme of change,” says Nicole. “I’m from Manchester and growing up here means that I’ve seen so much change in the landscape – yes, the city is changing and evolving.

“I feel like the theme of change emphasized to me that life is short and we should embrace it – having listened to people’s stories of the city. I love what change can do and Manchester is ever-changing and ever-growing… full of love”.

You can watch Nicole perform A Rucksack and a Journey here.