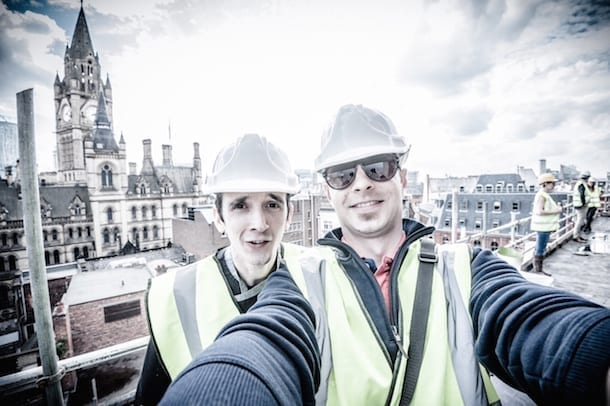 Located within the Upper King Street conservation area of Manchester city centre, this Grade II listed building, dating back to 1864, is undergoing redevelopment into a luxurious and intimate townhouse hotel by Eamonn and Sally O’Loughlin, proprietors of Eclectic Hotels.

If you were in the Booth Street area last week and saw bedroom furniture, a BBQ, candelabras, wedding flowers and even a wedding dress been carried inside the King Street Townhouse building site, you may have wondered what on earth was going on.

If you thought they were hosting their first wedding you’d be wrong. They were actually filming some promotional videos with TunaFish Media.

On the sixth floor where the terrace looks out to the clock face of the town hall, the head chef lit the barbie to cook up a feast for the hard working builders. A burger and a chilled beer (non- alcoholic, of course) and the chaps were happy. 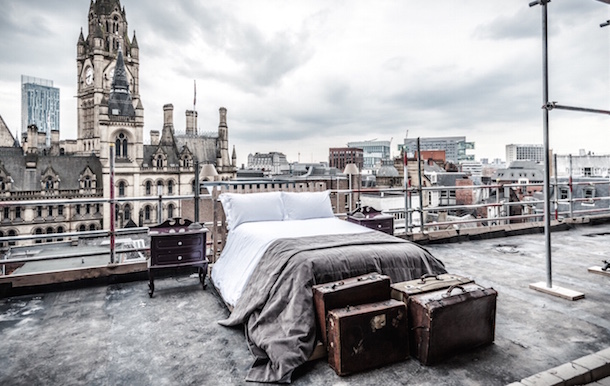 Once the builders were well fed and watered, it was time to transform the set. With the demolished church episode of Friendsin mind, and in complete contrast to the scaffold surroundings, they created a fairy-tale wedding scene. The bride and groom at centre stage posed for an iconic shot in front of the Manchester skyline.

The third shoot was perhaps the strangest of all. A bed was set up on the terrace to create… a room with a view! King Street Townhouse will have 40 bedrooms with two suites showcasing this magnificent landmark of Manchester.