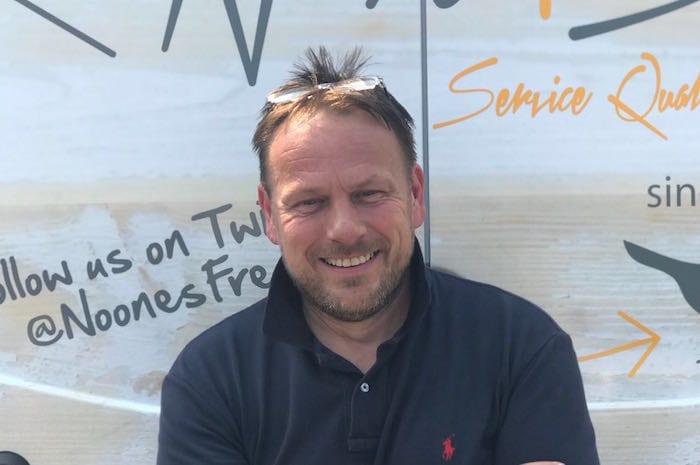 When star chef Jonny Baron was recruited recently by one of Greater Manchester’s leading catering industry suppliers, one follower on social media called it “the signing of the summer.”

Jonny, who worked at every single 3* Michelin restaurant in the UK and for many of the greatest names in the business during his 20 years in the nation’s leading kitchens, has joined Stockport-based R Noone & Son from nationwide supplier Wellocks, where he spent 13 years.

Noones, who last year established a state-of-the-art development kitchen at their depot in Bredbury to expand and enhance its services to clients, see Jonny as the perfect figure to drive the business in a new and exciting value-added direction.

Signing of the summer 👍👏

“Jonny brings a chef’s perspective that we’ve never had before to our team,” said Maggie Noone, who with her managing director husband Mike led the family business from the brink to a current annual turnover of more than £13 million.

“Coupled with the huge success of our development kitchen, we know he can help us drive the business forward, expanding our product ranges and continuing to deliver our aims of quality, service and value.”

The family firm was founded by Mike’s mother Rose who ran a fruit and vegetable stall at Heywood market in the late 1960s. It expanded quickly with the establishment of five successful shops.

“We built destination shops and a great reputation,” said sales director Maggie, “but the coming of the supermarkets and the fact they opened every day, every minute, threatened to kill us as they did to many other businesses.

“We had to change to survive so started selling to the catering industry. Only a couple of other firms were doing it at the time. Those who sold to the restaurant and hotel trade tended to be expensive; the others supplied schools, hospitals and the like under contract. We aimed for the middle, providing the best produce and great value. But it was tough. In the beginning I looked up potential clients in the Yellow Pages and went knocking on doors.”

Mike and Maggie’s timing was right though, entering the market just as the restaurant boom really took off in the 1990s. They decided to concentrate on clients within a 50-mile radius (later extended to 60 miles) of their base because, as Maggie puts it, “when a customer asks us for something we like to say ‘yes we can’. Within 60 miles we can guarantee that. Go further out and we can’t.”

Noones moved to their Bredbury site from New Smithfield in Openshaw eight years ago and have seen consistent growth. The rationale behind the opening of the development kitchen stems from the fact that many clients, especially in the city centre, pay so much in rent and rates that they have to maximise the use of every square inch of space.

“That doesn’t leave them much scope for training, menu development and storage. So we provide it here and Jonny will be a real asset to us,” said Maggie.

Burnley-born and bred Jonny was an apprentice at Northcote Manor at Langho and went on to work in stellar kitchens, including Michel Roux’s Waterside at Bray, brother Albert Roux’s Le Gavroche and Nico Ladenis’ Chez Nico at 90 Park Lane.

He also worked at the renowned Gravetye Manor in Sussex and the Slaughters Manor House in the Cotswolds before returning to Northcote as head chef for a ten years stint with Nigel Howarth.

“I thrive on new challenges and am looking forward to what the future holds both for myself and the company,” he said.

“Noones have a great customer base and I believe my knowledge and experience will complement the existing knowledge within Noones business, in order to provide our customers with the fantastic range and service they would expect from their local produce and dry goods supplier.”

He also hinted that his contacts with some of the best chefs in the UK will bring them to Noones development kitchen to stage demonstrations.