Review: The King and I at the Opera House 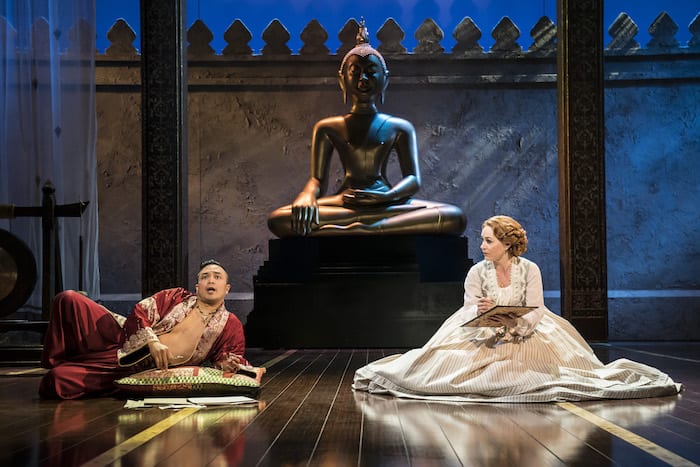 Rodgers and Hammerstein’s The King and I is one of those musicals of which you can legitimately say, “They don’t make them like that anymore.”

If you’re tired of movies turned into shows and fancy something akin to South Pacific or The Sound of Music, then Bartlett Sher’s new production could be what you are looking for.

Revived and staged at the Lincoln Theatre in New York, the show won four Tony Awards and a West End transfer followed, playing to packed audiences. Even though the piece was described as dated, it won people over because of the fantastic score and because the cast was led by the fantastic Kelli O’Hara, who I was lucky enough to see. She made a superb Anna, the British school teacher who stands her ground against the steadfast King of Siam.

The tour, which opens in Manchester, has the majestic qualities you would expect. Although it’s not quite as grand as the London Palladium production, it comes pretty damn close.

We are taken back to 1862, to a world that feels restrictive and where the word gender is never uttered.

Widowed school teacher Anna Leonowens (an excellent Annalene Beechey) arrives in Bangkok with her son to work for the King to teach his many children. From the minute she arrives, Anna refuses to obey the rules and she and her new royal boss clash.

This is when the beautiful music and lyrics of Rodgers and Hammerstein sweep you away. From I Whistle a Happy Tune to Getting to Know You, these songs are classics you will recognise even if you are always glued to Spotify and know nothing about musical theatre. Like The Sound of Music, the songs have marvellous melodies and hooks and leave you smiling.

I have seen Ken Watanabe play the King. He captured his frustration and anger perfectly, as here is a man who has the power to rule but not to communicate. Here, Jose Llana brings in his softer side a little too soon for my liking. But he brings comedy and a humanity to the King which has been lacking previously.

Kamm Kunaree is perfection itself as Tuptim, a reluctant concubine who rebels against the King. She has a superb voice and really brings something modern to this piece, as she has an air of independence and defiance in the face of power being used for the sake of it.

Cezarah Bonner’s Lady Thiang is also in fine voice and delivers a different type of power: quiet and subservient in front of the King and twice as powerful when she sings.

Kok-Hwa Lie and his booming voice create such a big impact as Kralahome, the King’s confidante and Prime Minster, that you can see why he is understudy for Jose Llana, as he would make a fine leader himself.

The King’s children are all excellent. Like the Von Trapp kids in The Sound of Music, they tug at your heartstrings whenever they are on stage.

The show does feel dated because although Anna fights back and tries to provoke change, too often she resorts to knowing her place. Some members of the audience may have a problem with this – and other stereotypical behaviour – which stick out in 2019.

But this is a period piece, and seeing a woman attempting to stand up for herself and others in the 18th century does show you how far we have come and how far we still have to go.

Bartlett Sher clearly loves the original source material and there are moments when he could have cut some of the overlong scenes involving a theatre production in the show itself as this would enable you to feel more emotion during a rushed finale.

But with a cast as superb as this, a colourful set that is a feast for the eyes, and wonderful songs which make you whistle a happy tune, The King and I is still a musical which reigns supreme.

The King and I is at the Opera House until 11th May.