Meet Jack Woodhead: the cabaret star from Denton who found fame in Berlin

A performer, composer and classically trained pianist, Jack Woodhead is a leading figure in the German and international cabaret scene.

He’s lived in Berlin since 2010 and has written and starred in many shows for renowned German theatres.

But Jack’s story begins much closer to home – in Denton, where he grew up, attending school at Egerton Park and going out on Canal Street as a teenager.

“My mum was in local amateur dramatics, and she loved going to the theatre, so at Christmas we’d go to the Royal Exchange, the Palace, the Opera House, to see the shows and the pantomimes.

“I always loved it.”

Jack was seven when he started learning the piano – and it was clear he had a gift for music.

“My mum played,” he says. “We had a two octave Casio electric keyboard, and I had a local piano teacher in Denton who taught me until I was about 10.

“So I had to audition for this tutor, who was the head of music at Chetham’s, and he could see I had the talent to be a classical pianist.”

Jack studied classical piano in the week as a child, and musical theatre at weekends – and he also began to develop his distinctive look at a young age.

“We had a dressing-up box at home when I was little,” he recalls.

“I don’t think I asked for it, but my parents were quite artistic. I remember my grandma remarried when I was about 10, and she wore a pink Spanish flamenco dress, so she was quite camp, really.

“All my family like the arts. My dad was a DJ.

“So we had this dressing-up box, and we’d put on plays in the living room – Peter Pan, Scrooge – and looking back at photos, my brother would always be dressed as, say, a monster, whereas I’d take my mum’s scarves and kitten heels and brooches and clip-on earrings, all very garish but I loved them.

“And bless them, my parents never made me feel like I couldn’t.

“I wasn’t necessarily dressed up as a woman, but I always had wigs and make-up.

“Then when I went to university, everyone just assumed I was gay and nobody cared.

“By then I was with friends who could do my make-up so it would actually look good.

“I’d experiment more with fashion. And I really found my look.

“By my third year, I’d honed it. That’s when I bought my first stripper shoes, as I call them.

“But I like playing with that ‘in-betweenness’, that sort of ’80s David Bowie style, for example.”

At university, Jack studied music and theatre – but he really wanted to bring those things together. And that’s where he discovered a love of cabaret.

“In my second year, I did a three month exchange in Berlin,” he says.

“It opened my eyes to what cabaret was. Because I didn’t have that growing up in Denton.”

At 21, Jack spent a year in London, at Proud Cabaret.

“But with the scene back then, you got put into a box – a musician, a musical theatre performer, a comedian, a drag queen –  it was all very separate.

“I wanted to find a work venue where I could bring all these things together and do cabaret. And Berlin offers that.”

So Jack made the move to Berlin 13 years ago, with just £1000 of savings, to become a cabaret performer.

“I didn’t have anywhere to live, and I didn’t speak a word of German,” he admits.

“But Berlin is such an international city. I started doing open mic nights. And it just took off.”

To start with, Jack says he couldn’t even afford to pay for the shows he wanted to watch in Berlin, “so I’d just come into the bar after the show, dressed up, to get noticed”.

And he picked up learning German quite quickly once he needed to for work.

“When I got my first job at the Wintergarten, a famous variety house which holds 450 people, you do the same show for three months – and that had to be in German.

“I actually learnt it like a script to start with, and people thought I was much better at German than I really was.

“One of the biggest things I did was the Berlinale film festival in Berlin – they have the Teddy awards for all the queer films, and I hosted that for two years.

“And now I have my own show in one of the spiegeltents in Berlin.”

What Jack would really like to do now, he says, is write a Eurovision Song Contest song for England.

“And I think I could. I could write a killer Eurovision song. 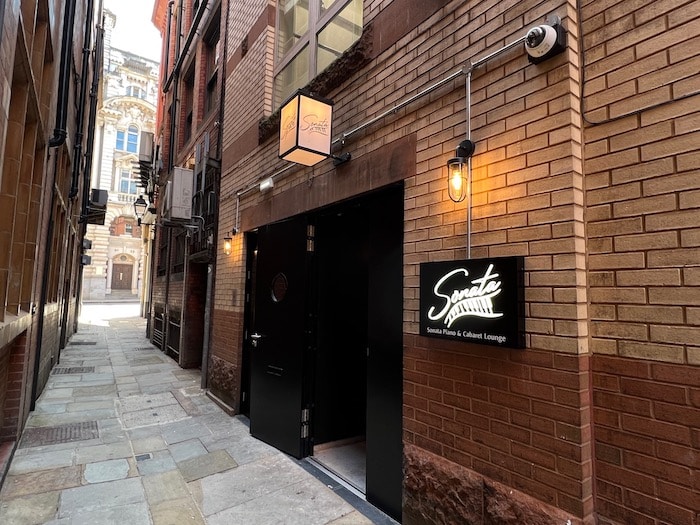 Jack had never performed in Manchester before the recent opening of new cabaret and piano bar, Sonata.

“Every time I come back to see my parents in Denton, I google ‘cabaret bars Manchester’, and there’s not really anything,” he says.

“Then about six weeks ago, I googled it and read a piece about Sonata opening, inspired by the cabaret clubs of New York and Berlin.

“I emailed them saying, ‘I’m from Manchester! I’ve lived in Berlin and New York – I have to perform here!’.

“I was more nervous than I’ve ever been, I think. In Germany, part of my act is being the British person. I knew a lot of the stuff just wouldn’t land in England.

“But I was also really excited.

“I do love Manchester. I love the north. I feel at home every time I come back.

“And I thought, I’m bringing something to Manchester that people don’t see very often.”

Jack is clearly very fond of his hometown. Would he consider moving back?

“Manchester has such a strong sense of who it is,” he says. “There’s a certain energy and attitude.

“People are open, and not snobbish. Manchester has creative freedom. I love the people. The humour.

“If I lived in England, I would want to live in Manchester. It’s home to me.

“I’ve never felt like there was the right place for me to work in England, but I do miss it, and I’d love to come and work here, make my mark a bit.

“I have big dreams now. I want to be discovered a bit more in the UK.

Jack Woodhead is performing at Sonata, St Ann’s Alley on Saturday 16th July 2022 from 9pm. You can reserve a table here.