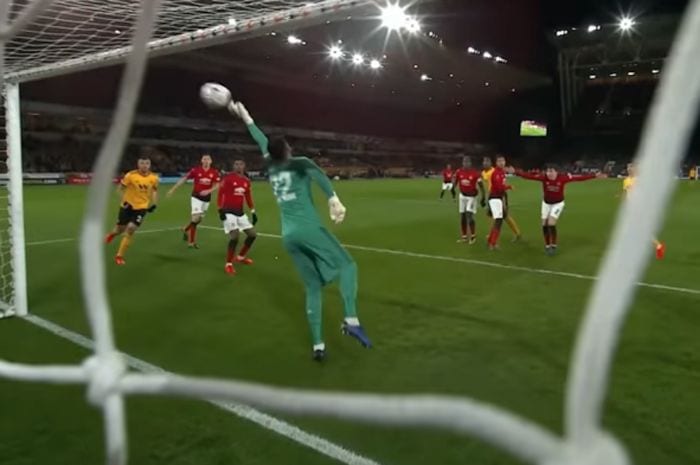 The FA Cup defeat to Wolves was the first really poor performance for Manchester United under Ole Gunnar Solskjaer.

Having beaten both Arsenal and Chelsea away in the FA Cup, it was so disappointing to come unstuck in a difficult, but entirely winnable game.

All credit to Wolves – they got their game-plan spot on and stifled United, forcing them into a slow and ponderous performance.

They’ve got a great record against the top sides this season and showed exactly why they have realistic ambitions of a European place in only their first season back up from the Championship.

But what was really disappointing from a United point of view is that this was nothing new from Wolves. This is how they play. They have a solid five at the back, they switch it from left to right with long balls constantly and they leave their two forwards isolated, hoping they can conjure something on the break.

Their second goal was classic Wolves. And terrible from United.

Solskjaer will have known how they play. And he will have drilled it into his players. He’s given tactical masterclasses in his short tenure at the club in analysing how the opposition plays and how to exploit their weaknesses. It’s what he did as a player.

Wolves followed their usual tactics and United should have coped much better. The FA Cup was a huge chance of silverware. It’s the first real blip of his tenure.

For me, the game showed that the cracks have been papered over slightly since the change in management.

United fans will have been pleased to see their first choice midfield three back in action, but they were dreadful. Nemanja Matic was back to his ponderous moving of the ball, Paul Pogba was anonymous and Ander Herrera’s limitations were once again in evidence.

In hindsight it may have been better to have the likes of Fred, Scott McTominay or Andreas Pereira alongside Pogba.

Work needs to be done in the summer on this area in particular.

So Ole has a lot on his plate in the international break we now find ourselves in. Usually a weekend off from the Premier League is the last thing managers and fans need, but this one could be a blessing in disguise.

It gives the management team the opportunity to take stock and get back to what United were doing well. The PSG result was epic, but it was clearly draining on everyone involved.

Looking back, it’s not surprising to see United lose two on the bounce straight after. To pick themselves up for two huge away games in such quick succession after the win in Paris was a massive ask. Let’s not be too harsh.

But a return to winning ways at the end of March at home to Watford is essential. United are then away again at Wolves before the huge first leg encounter with Barcelona on 10th April.

After the away leg at the Camp Nou, United travel to Everton away and face City and Chelsea at home to complete a potentially season-defining run of fixtures.

A fresh and squad firing on all cylinders is needed. Pogba needs to get back to form and the midfield needs to move the ball much quicker.

Importantly Romelu Lukaku is likely to be ruled out of Belgium’s games over the next 10 days and should be back and fresh for United’s key upcoming fixtures. He was clearly missed against Wolves. United had no plan B when they couldn’t get in behind them. Lukaku’s brawn would have been the ideal way to mix things up.

There’s talk of an announcement being made of Ole’s full-time appointment during the international break. Even if it doesn’t, all eyes will be on him when the Premier League fixtures return.

This is his first real blip. How he recovers will be critical for his future at the club and the team’s prospects for the rest of the season.