iPhone Stories: My little chair is at the centre of the world

Exploring what makes this city such an extraordinary place to live and work. 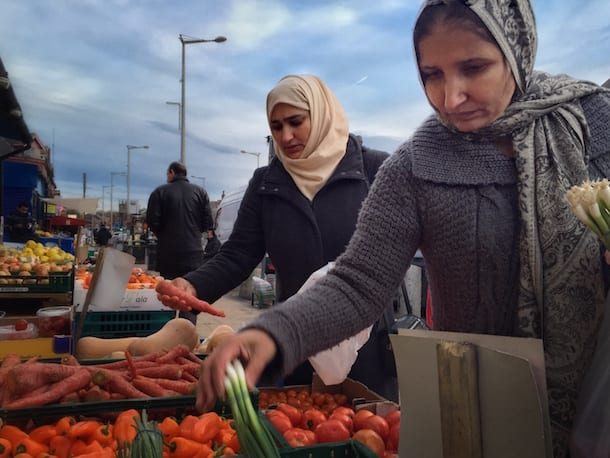 Each week photographer Simon Buckley will visit an area of Manchester for I Love Manchester, exploring what makes this city such an extraordinary place to live and work.

The previous week, there had been an usual warmth. Washing dried on suburban lines and people were seduced into thinking that maybe summer, like supermarket strawberries, was an all year thing. But now a mean chill had arrived, and snow was settling on the Pennines.

During those false flag balmy days I’d gone to see a man about buying a taxi. This flight of fancy took me to Cheetham Hill, where I examined a rusting, white vehicle that looked as if it would soon drain my bank account. On the journey I’d driven past the Manchester Superstore, perhaps Manchester’s best fruit and veg shop, and realised how long it was since I’d bought my tea from there. And so, on the following Saturday, I returned.

The supermarket is housed in an old cinema, adjacent to a Victorian, redbrick church that had its doors firmly locked. I wondered if people used to spill out onto the streets after listening to stories of Jesus and straight into a world of film and the stories of Hollywood. Apparently, it’s a Grade 2 listed building, which I discovered because Ali, the manager at the Superstore, told me. 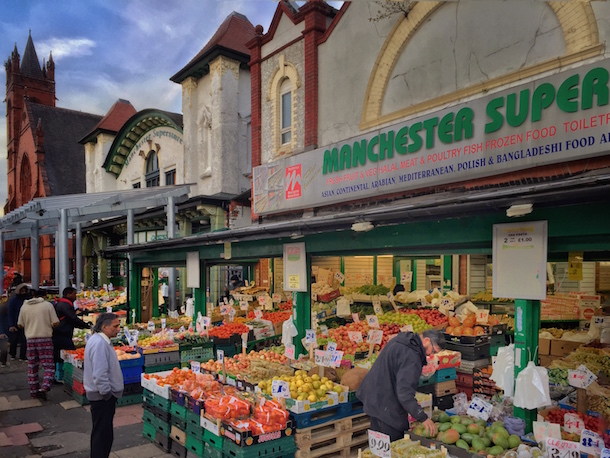 I’d ended up chatting with him because a couple of his staff had noticed me lingering and taking pictures, causing them enough suspicion to point me out to the management. I told Ali that I was simply visiting a part of the city that I’d not been to for a long time, and asked if could he tell me what jackfruit were. He smiled and we both looked at the huge, armoured fruit on the stall in front of us. “It’s used in cooking,” he said “It’s sweet but it can be used for a main or a dessert. They can cost up to £60 but people still buy them.” I sniffed one, like a suspicious dog and thanked him.

Stalls covered the pavement, leaving little room between them and the waiting cars on Cheetham Hill Road. It seemed that nearly every nationality that had ever emigrated to Manchester was shopping here. Pakistani wives were carefully choosing vegetables, a Polish man lifted a big box of fruit, a teeny Irish woman was buying enough cooking apples for a giant crumble and a couple of smiling African men tensed their arms against the solid weight of their bulging carrier bags. 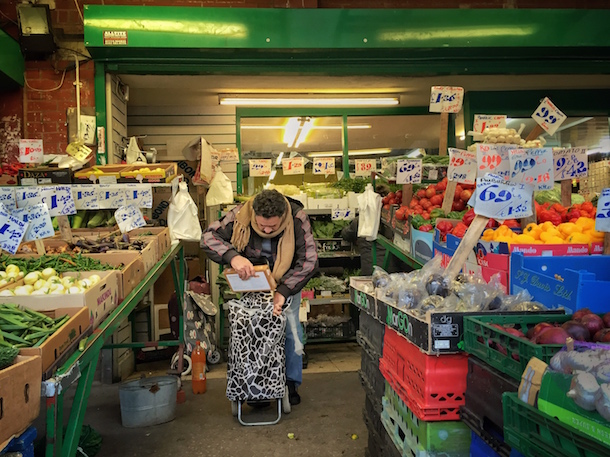 As I wandered further down the street, I noticed that each of the shops had tiny little stalls outside of them, staffed by solitary men wrapped up against the cold, selling phone cards for international calls. I asked one man if I could take his picture. At first he refused, nervous of my intentions, but then we started chatting. His name was Khan, and he’d come to England 6 years ago to escape the violence and insecurity of the tribal region around the Afghan and Pakistan border. He’d studied business at Peshawar University.

“Each day I serve people from all over the world. Afghani, Middle Eastern, African, European. All people. My little chair is at the centre of the world,” he said. An acquaintance passed by and he put his hand on his chest and muttered a greeting. And then he said “These people that do the bad things are worse than animals.” I asked if he was referring to the deaths in Paris. “Not just in this place. In December 2014 do your remember when all the children were murdered in Peshawar?” I did, but had forgotten. His phone rang, I mimed my goodbyes and returned to my car, past the jewellers, halal meat shops and beauty salons that squeeze in between the takeaways.

As I drove off, I looked towards the sun setting in the west and nearly drove into a car coming up the street. The young, Muslim driver gestured that he’d understood my mistake and drove off, leaving me to turn up the heater to warm my frozen hands. 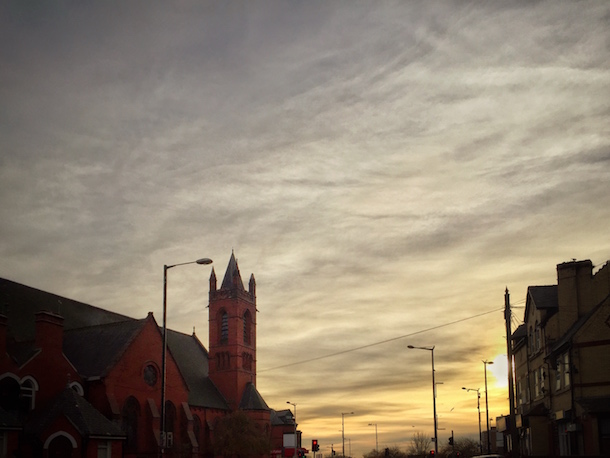