In search of decent food & drink on Oxford Road

Why it Oxford Road so criminally underserved for decent food and drink? 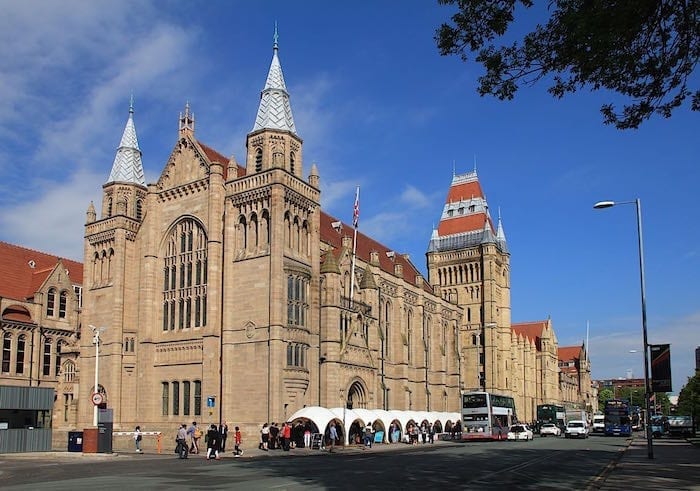 The road that is often tagged as the busiest bus route in Europe (it’s not, by the way) is an absolute monster. It connects the city to some of its better known suburbs to the south, regularly buzzes with several thousand students across two universities (even in the summer) and the hundreds of people who work in those institutions. It also has visitor attractions and cultural must-sees which attract huge numbers of visitors.

“It would be lovely
to see a Volta, a
Kosmonaut, or a
HomeSweetHome
pop up around
here.”

If you’re a grown up (ie not a student), it’s hard to find a decent lunch up this way. In the past six weeks, I’ve been to Sand Bar (good, but pricey), Falafel Express (seriously good and seriously cheap), Umami (fast and furious, but always busy) and that’s kind of it. Kro is here too (nipped in for a beer) and EatGoody is a cute basement bar, but both that and Trof’s Deaf Institute have been shut during the day for long stretches of the summer holidays.

Which is odd, given the fact that although a lot of students are yet to arrive, the road is teeming with parents and kids heading to the Aquatics Centre, the museum, and the Whitworth. When you get to the gallery, you’ve got Red Chilli and McDonalds opposite. Hardly an extensive selection.

Having spent a few weeks round there, it’s clear that there’s a pent up demand for a few more places to have a drink and grab a bite to eat.

If you’re up near the Aquatics Centre, heading down to On the Eight Day is a bit of a trek but worthwhile. The bit in between is fast food for students. Basically, if you’re having an Abdul’s for lunch, you need to have a word with yourself.

Whilst not perfect, the food offer is nowhere near as sparse as places to booze.

The Footage and Firkin is an enormopub, much smarter than it was when I used to drink in it almost two decades ago. But it can be impersonal, despite a more daring drinks range than you might expect. Sand Bar is great, Deaf Institute and Kro, too. And then it kind of stops. Odder is a long way away, the Salutation is tucked from view (but worth a visit). Big Hands is a bit of a walk, and maybe a bit more evening than daytime.

Let’s look at the figures. The University of Manchester has 38,000 students and more than 11,000 staff. Manchester Metropolitan claims 37,000 students and around 4,500 staff. Many of the students live on or near campus. So why are there only a dozen or so bars to choose from? And don’t get me started on coffee shops and cafes. Do you know how hard it is to get a sandwich around here? The Spa closed recently to allow the bridge to come down. That reduced the choice by around half.

Whitworth Street West and Chester Street have formed nice little food and drink hubs to keep the students going. The area around the university itself is crying out for the same.

Try it. Walk from the Aquatics Centre to the Whitworth Art Gallery and see how limited the offer is. Keep going, past St Mary’s. Barely a thing till you hit Rusholme.

Don’t get me wrong. I’m not suggesting you flood the Oxford Road corridor with booze, but there is a serious lack of quality independent venues to service the tens of thousands of people that study and work here, especially the latter.

It’s surprising that more of those Northern Quarter operators so keen to expand haven’t made the journey up here. It would be lovely to see a Volta, a Kosmonaut, or a HomeSweetHome pop up around here. Hats off to those early forerunners, but the area is ripe for more choice.

Maybe I’m overstating the cause. Maybe the numbers don’t stack up. But as the student residential schemes that are cropping up around Oxford Road increase the standard in their own sector, it would be nice to see more quality food and drink on Oxford Road, too.

Although when those pubs close, I’ll still be heading to Abduls for a kebab.