A photography exhibition at IWM North will display new, never-before-seen photographs of north-west based Holocaust survivors when it opens on Holocaust Memorial Day 2023 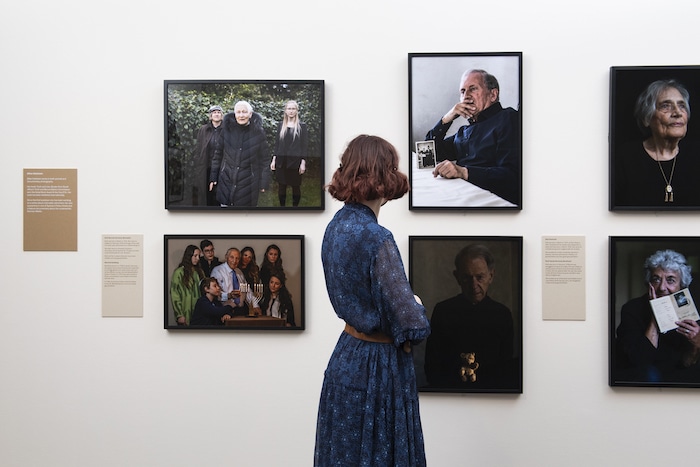 Following its inaugural run at IWM London in 2021, Generations: Portraits of Holocaust Survivors will open at IWM North with four new photographs taken by The Royal Photographic Society (RPS) President and Chair of Trustees, Simon Hill.

These new photos will sit alongside the exhibition’s original 60 contemporary portraits of Holocaust survivors and their families.

These powerful photographs capture the special connections between Holocaust survivors and the younger generations of their families, shining a light on the full lives they have lived and our collective responsibility to ensure their stories live on.

One survivor who has been newly photographed by Simon Hill is Itzick ‘Ike’ Alterman (born 1928 in Ozarow, Poland), a survivor of four concentration camps – Blizyn, Auschwitz-Birkenau, Buchenwald and Theresienstadt – as well as a death march.

His father died in the Buna work camp; his mother, his 14-year-old sister and his nine-year-old brother were transported to the Treblinka death camp in October 1942 and murdered upon arrival by the Nazis.

After the war, Ike came to England as one of ‘The Windermere Children’ and began to slowly rebuild his life.

Finding stability and happiness with his wife and children – his ‘new family’ as he calls them – Ike oversaw the creation of a thriving jewellery business in Manchester, eventually carving out a life for himself which defied his oppressors.

The persecution of Europe’s Jews by the Nazis and their collaborators between 1933 and 1945 led to the mass extermination of 6 million lives. For those who survived, its memory and impact were life changing.

Through a series of individual and family portraits, the moving photographs in this exhibition present a group of survivors who made the UK their home after beginnings marked by unimaginable loss and trauma.

While offering a space to remember and share their stories, these portraits are a celebration of the rich lives they have lived and the special legacy which their children and grandchildren will carry into the future.

James Bulgin, the Content Leader of IWM’s Holocaust Galleries, says: “These remarkable images of survivors and the generations that have followed them are a powerful and important reminder that despite the catastrophic destruction of the Holocaust, Hitler’s intention to destroy all Jewish life and culture across Europe was ultimately unsuccessful.

“In showing the dynamism and diversity of those that endured and flourished, we are given cause to reflect on the profound significance of what has continued and the tragic extent of what was lost.”