“I find the nightmarish more interesting”: The Tiger Lillies bring a macabre musical premiere to Manchester 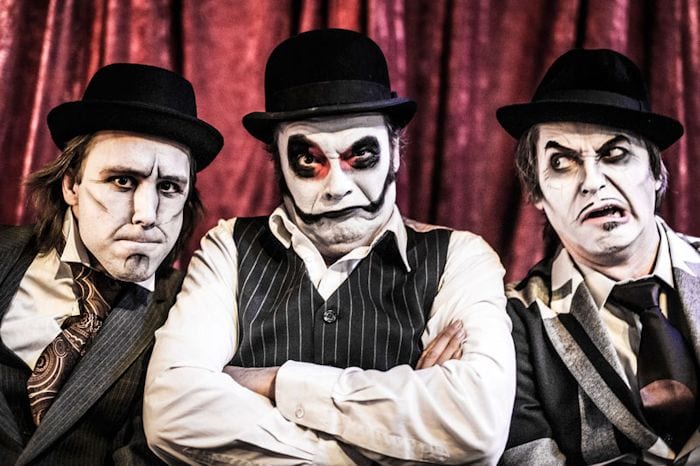 Described as the forefathers of Brechtian punk cabaret, The Tiger Lillies have found worldwide recognition for a unique sound and style that merges the macabre magic of pre-war Berlin with the savage edge of punk.

“There is nothing else like them,” said Franz Ferdinand frontman Alex Kapranos. “Any description of them is an injustice, they are completely peerless.”

The world premiere of their new show, Corrido de la Sangre, which explores Mexico and the Day of the Dead, is at HOME as part of the ¡Viva! Spanish and Latin American Festival 2018.

It tells the story of a corrido singer and his band who return from the realm of the dead to haunt their killer and present a dark story of intrigue, vengeance, murder and the mayhem of a romance gone bad.

Set in a small dusty town in the lands between Mexico and the US, the singer relays the tale of his rise and fall at the border, where mythical creatures from Aztec times still haunt the night. This is a realm where folklore and real-life merge, where audiences meet a knight, an evil king, a damsel in distress and the Saint of the Sinners.

Martyn Jacques’ singing and performance on accordion, piano, harmonica, organ, ukulele or guitar is accompanied by Adrian Stout’s multi-instrument playing, on bass, euphonium and musical saw, plus sepulchral backing vocals. Jonas Golland is on the drums.

A self-trained musician and singer, Martyn’s hauntingly beautiful falsetto has become The Tiger Lillies’ trademark and combined with his dark and edgy song-writing style has led to him being widely known as the ‘Criminal Castrato’.

I caught up with Martyn and Adrian during rehearsals to find out more about their story, their fascination with the dark side of life, and why they’re bringing their new show to Manchester first.

“I always wanted to be a singer, and I always wanted to have a band,” says Martyn, a self-trained musician who formed The Tiger Lillies thirty years ago and spent his early years living above a brothel in London’s Soho.

“I was 30 when I started the band. I’d bought an accordion about a year before, and I always sang with a high voice. I thought I’d get a double bass player and drummer, which I thought would be an unusual combination of instruments. I wanted it to sound quite unique and different from anything else. And it did.”

But the band didn’t quite get the reaction he anticipated.

“I thought we would be more accepted by the rock crowd and festivals,” says Martyn. “But actually that world is very closed. However, the theatre world embraced us. We’ve been playing all around the world for many years but it’s always been arts and theatre festivals. That’s never been what I planned.”

Though their sound has remained similar over the decades, with influences including Klaus Nomi, the German countertenor noted for his wide vocal range and an otherworldly stage persona, their distinctive look has developed across various circus shows and productions including Shockheaded Peter, Lulu and The Rime of the Ancient Mariner.

“I didn’t wear make-up for the first few years,” says Martyn. “The sound was pretty much the same, but the look has evolved through the theatre shows.”

“There didn’t seem much point in wearing make-up in the King’s Head,” laughs Adrian.

“I tend to focus more on the psychological aspects and the dark things,” says Martyn. “I tend to find the nightmarish more interesting.

“A lot of people don’t really like that, but I don’t know why, I think it’s more interesting. Lots of people like things to be more light and frothy, but I find that quite boring.”

“It’s a different way of looking at a story to try and get to the heart of it,” says Adrian. “Maybe a bit more visceral, a bit more direct.”

The trio are pleased that their macabre new show is premiering in Manchester.

“It’s good that we’re opening here rather than London,” says Adrian. “People in Manchester will get a chance to see the new show first. It’s really nice to be here and have a long run.”

It’s not the first time the band have spent time in Manchester. What are their thoughts on the city?

“The feeling I get walking around Manchester is it’s like the heart of the empire,” says Martyn.

“All these amazing buildings, I love looking at them. All the incredible wealth that was once generated, you can still feel it when you see these buildings. Manchester still has that feeling of wealth. But you look around and there are so many homeless people. It’s a striking contrast.”

The band have played their fair share of pubs over a career spanning three decades. Have they managed to find a favourite Mancunian drinking den despite their hectic rehearsal schedule?

“We’ve had a drink at the Briton’s Protection,” says Adrian. “It’s very friendly. And they’ve got a great range of whisky.”

Not too friendly, we hope. We wouldn’t want Manchester’s warm welcome to soften the band’s savage edge.

Corrido de la Sangre is at HOME until Saturday 5th May. Tickets from £10.