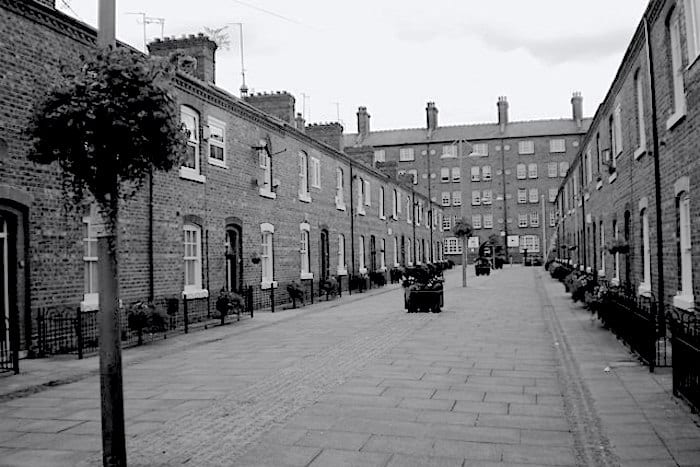 Ancoats is one of the city’s most sought after areas and has an increasing number of cosmopolitan, independent traders.

Home to many houses built in the 1880s, today this hipster neighbourhood is in great demand. Houses on Anita Street are among some of the most desirable in the area. Nice toilets, too.

But back in the 1880s, Ancoats was a horrific slum. It was one of the world’s first industrial suburbs – and by all accounts it was truly hideous.

When people poured into the new metropolises of Liverpool, Birmingham and Manchester, sanitation was a major issue.

In these cities sewerage infrastructure hadn’t grown with the population and a crisis point was looming.

The old back-to-back houses were thrown up to accommodate a massive influx of workers who flocked to towns and cities from the countryside hoping to fill the newly created jobs the Industrial Revolution had created.

This was no place to raise a family. Living standards were dangerously poor, especially for the most vulnerable members of society, and people migrated here only out of desperation.

While the middle classes were luxuriating in their hot baths, the working class residents of northern cities weren’t enjoying such satisfactory sanitation.

One of the worst culprits was Manchester, which locals referred to as Stinkopolis. If you were working class, the chances are you’d be sharing one toilet with about a hundred other people.

“Manchester is the heart of the Industrial Revolution,” said historian Julie-Marie Strange on Phil Spencer’s History of Britain in 100 Homes. “It’s known globally as Cottonopolis but it’s also known as Shock City which gives you an insight into just how appalling living conditions were in the city.

“The main problem was there’s no sanitation. If we were walking through a Manchester street, we’d be picking our way through animal and human waste and there would be lots of vermin. Imagine the smell. It’s pretty grim.

“Right until the 1880s it has one of the highest mortality rates in the UK. Those are deaths from cholera, typhoid, gastrointestinal diseases – so entirely preventable illnesses.

“Visitors to Manchester were appalled by the living conditions that working people inhabit. Some writers referred to Manchester as ‘Hell Upon Earth’.”

Hell on Earth was no exaggeration, largely because of the lack of sanitation.

“A street like this [Anita Street] of 20 houses would share a communal privy. That means up to around a hundred people sharing what is essentially a cesspit. And they’re not emptied very frequently, you get overspill and when they are emptied they’d be emptied at night…”

The newly formed Manchester city council promised to deal with the problem. But despite banning the building of back-to-back terraces, decent toilets for the working classes were still a long way away.

By the 1880s, Manchester still had one of the highest death rates in the UK and the council had to do something. It was almost the end of the century and this was no longer acceptable.

The council started to take sanitation seriously. One of the solutions was to build houses with good plumbing and sanitation, would you believe.

And that had a massive impact on people’s lives. We see the mortality rate begin to decline at long last.

Indoor plumbing and no more pooing in the street – thanks to Manchester city council.

This was a huge leap forward for Manchester’s working classes. To celebrate this new found cleanliness, the city council proudly named it Sanitary Street. It was transformed so much that in the 1960s the residents asked for some of its letters to be removed.

It was an important part of the history of Manchester.