Hotel Football: the other Theatre of Dreams, NOW OPEN for business 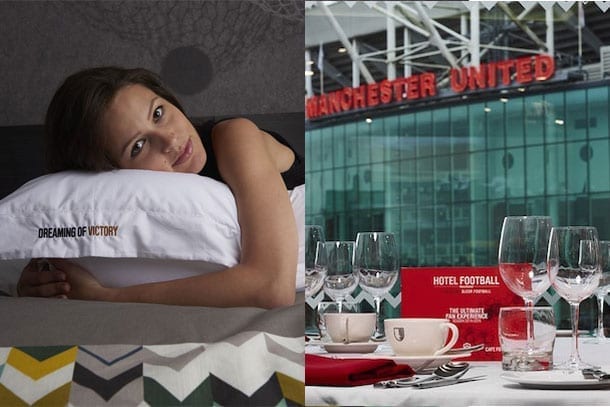 A £24 million hotel directly opposite one of the most famous football stadiums in the world, owned by 5 of said stadiums former charges. The unofficial motto of Manchester United is ‘Hated, Adored, Never Ignored’, and Ryan Giggs, Gary Neville, Phil Neville, Paul Scholes and Nicky Butt will hope that at least the latter two of those sentiments ring true for their new business venture, Hotel Football.

Manchester’s newest attraction is sandwiched between Old Trafford and the ever-growing creative metropolis that is MediaCityUK. And like the sport that inspired it, Hotel football will aim to attract people from all over the world to experience its quirky charms. All the rooms have cosy, luxurious beds, free wifi and, obviously, a giant TV with full Sky Sports access.The decor is undeniably football-orientated, but perhaps more subtly than people were expecting, and in a nice touch, some of the artwork that lines the walls was created by University of Salford students – handpicked by Gary Neville.

What is not subtle, though, is perhaps the hotel’s standout feature. Simply called ‘Heaven’, situated at the top of the building is a rooftop football pitch that looks out upon Manchester’s skyline and Old Trafford’s famous walls. The pitch will be available to book for drinks receptions, dinners, BBQ’s, weddings and, of course, football matches. So even if it is cheating slightly, you’ll be able to say you scored the winner at Old Trafford. Sort of. 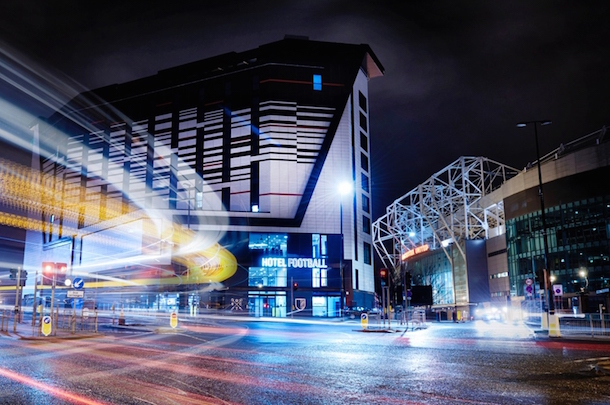 The hotel’s restaurant, like Cafe Football in London, aims to encapsulate the very essence of the beautiful game in a dining experience. It promises to offer a diverse, rounded menu and more than a few nods to football, playfully appealing to foodies. It’s also worth mentioning that notorious food critic Jay Rayner once called the Westfield Cafe Football’s Sausage Roll a ‘glorious thing I want to adopt as my third child’. High praise indeed.

For a full match day experience, you’re looking at upwards of £250 per room, but it’s clear that for football lovers – and even more so Manchester United fans, Hotel football will be a paradise for anyone that’s ever loved kicking a ball.