Winter in the city is always an adventure.

You’ve skated – or maybe shuffled a bit and wondered if you’re too old to use one of the penguin aids – on the rink at First Street.

You’ve wandered around the Christmas Markets, consumed an oversized German sausage and feigned interest in purchasing a round of cheese as you reach for your eighth sample.

But eventually, your nose is red and your fingers are starting to turn blue. You need warming up.

You could have the traditional gluhwein, or even a mug of marshmallow-laden hot chocolate. But if, like me, you’re a gin lover, there is another way.

Forget the hot toddy and head to Mr Thomas’s Chop House for something more, well, juniper-led. 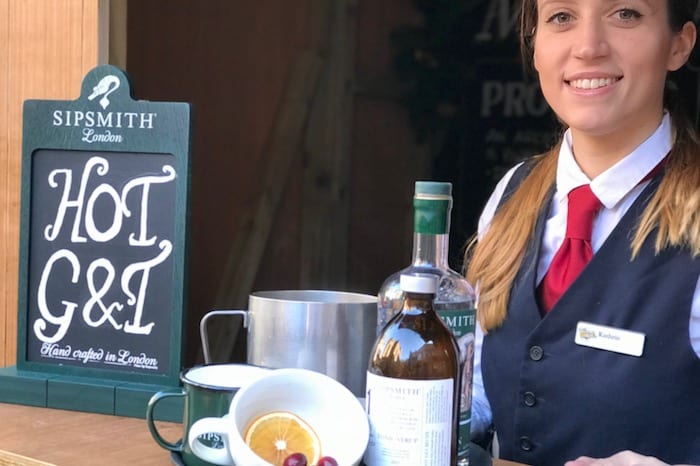 Say hello to the hot G&T.  It’s the perfect way to warm up on a wintery evening.

Sipsmith Gin have taken inspiration from the frost fairs of the 1600s, when the River Thames would freeze solid and markets stalls would appear there.

Along with the markets, there’d also be skating, feasting and, when you’d gotten just a little too chilly, a hot gin and gingerbread would warm you right back up again. Meaning that us Brits were responsible for the first recorded food pairing.

This tradition continued until the 19th Century when the Thames last froze over and the final frost fair was held.

Since then, the hot gin toddy has fallen out of vogue. Because not only did we invent the gin and tonic, but we also invented the freezer. We fell in love with ice and a slice.

Thanks to central heating and better insulation in our houses, hot cocktails have become a bit of a lost art – one that distillers Sipsmith are reviving wholeheartedly along with Mr Thomas’s Chop House.

Unlike its crisp cousin, the hot G&T is infused with red berries and garnished with an orange wheel, and served in its own bespoke enamel mug.

The hot G&T is a warming citrus rich mouthful and it really does warm you from the inside out. Think of it as a very grown-up version of Reddy Brek, as that warming glow lasts for quite some time afterwards.

It’s the perfect concoction to enjoy with Grandad’s Sausages, made by a family business which originated in Bury over fifty years ago, which are served up at Mr Thomas’s Chop House.

Then maybe head back to the Christmas Markets and grab a few more Belgian chocolates and revisit that cheese stall.