Mancunians stand together in solidarity on Holocaust Memorial Day 2020 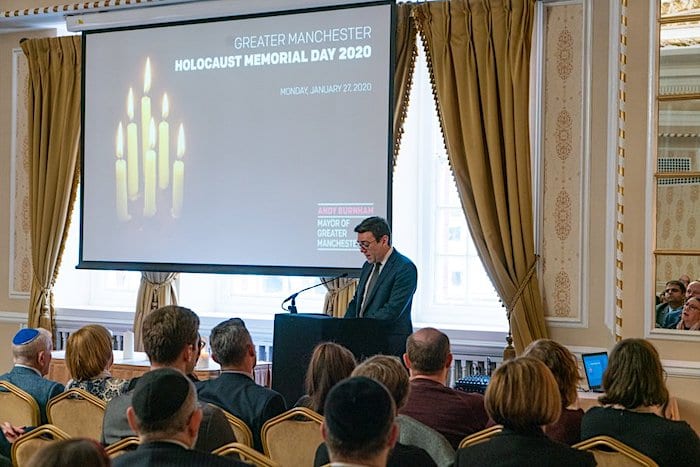 Holocaust Memorial Day is a time for everyone to pause to remember the millions of people who were murdered or whose lives were changed beyond recognition during the Holocaust.

This year’s Holocaust Memorial Day was particularly poignant because it marked the 75th anniversary of the liberation of Auschwitz.

As a mark of unity, the event was held at British Muslim Heritage Centre in Whalley Range for the first time.

The event reflected upon the effect of deliberately marginalising certain groups and  highlighted the important role ordinary people have in standing with their neighbours against all forms of prejudice.

Meanwhile, civic and community leaders came together at Manchester Hall to remember the millions of people murdered in the Holocaust.

Rabbi Daniel Walker of Heaton Park Hebrew Congregation addressed this year’s event, as did Icek Alterman (pictured), a survivor of the Holocaust now living in Greater Manchester. There were also readings from Figen Murray, mother of Martyn Hett, and Elinor Chohan MBE DL of the Northwest Board of Remembering Srebrenica.

Mayor of Greater Manchester Andy Burnham said: “Those who survived the Holocaust have given powerful testimony to the horrors they experienced, and as time passes on it is increasingly important that we hear their voices and reflect on the lessons of this atrocity and others around the world.

“Now more than ever, it is vital that we understand and recognise the historical circumstances that led to these appalling events, and challenge this kind of hatred whenever and wherever it occurs.

“The rich diversity of our places is our strength. I want to send a message of solidarity from Greater Manchester to all those around the world affected by persecution and its tragic, avoidable consequences: we will always stand with you.”

Manchester City Council’s Executive Member for Neighbourhoods, Councillor Rabnawaz Akbar, said: “Manchester has a proud history and tradition of inclusion and is made strong because of the rich diversity found within our neighbourhoods.

“Events like Holocaust Memorial Day remind us that tolerance and acceptance is the glue that binds our society together. It is essential that we oppose division in any form, because everyone in our community should feel that they belong.

“The coming together of two minority religious groups, during such turbulent times, which has seen anti-semitism and Islamaphobia become embroiled in our politics, demonstrates true unity.

“It is vitally important to remember how extreme divisions led to the persecution of millions of Jews during the Holocaust. We should all remember and learn from history that we must never allow such atrocities to happen again.”

As a result of the decreasing number of survivors still alive to tell their story, events such as these are essential in remembering and learning about tolerance for others’ beliefs, and ensuring the memory of all those who died is carried on into the next generation.