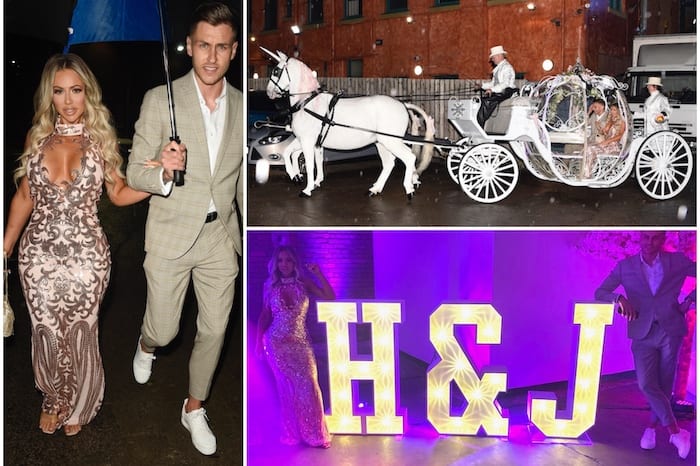 Reality TV star Holly Hagan celebrated her engagement to Macclesfield Town footballer Jacob Blyth with a truly spectacular party attended by a host of her Geordie Shore star pals in Manchester at the weekend.

And what an entrance from the couple, who arrived at the city’s Victoria Warehouse venue in a Cinderella-style carriage driven by white UNICORNS with pink hair.

Holly, wearing a glittering floor-length gown and Jacob in a smart grey checked suit, were greeted by all of their guests who waved and cheered on the steps of the Stretford hotel and events space on Saturday night as they arrived in the pumpkin carriage.

It was the start of a fairytale occasion for the loved-up couple, with Geordie Shore favourite Holly calling it the “best night of my life”.

And once inside, the party really got underway, with Holly posting a series of videos on her Instagram stories of the brilliant live entertainment, DJs and bongo players who helped revellers boogie the night away on an LED dancefloor.

Indeed, she hailed it the “wildest engagement party ever”.

North west event specialists Scene My Event helped to create the nightclub vibe and spectacular entertainment on the night, installing light up H & J initials that the happy couple posed beside.

Entertainment was provided by a roster of DJs and percussionist I am Monka on the night -with Holly posting a series of Instagram videos of her and pals getting into the feel-good vibe on the light-up dance floor.

And footballer Jacob, 27, even decided to give DJing a go himself – while Holly, 26, accompanied him on the bongo drums.

Nicole said: “Holly wanted the venue to look magical and give her guests a night they would never forget so that’s what NFE Events gave them!”

Getting into the bridal spirit, Holly also performed an outfit change during the night, slipping in to a gold bikini and flares to dance the night away after wowing in her sequin-clad arrival dress.

The event was being filmed by Geordie Shore producers, with plans for it to feature in an upcoming episode of the hit MTV show.

Castmates past and present were in attendance, including Sophie Kasaei and Charlotte Crosby.

Manchester-based Scene My Event’s Chris Warbrick and Martyn Stuttard helped to bring the party to life after being introduced to Holly through mutual friends, Adam Frisby and Jamie Corbett who run Salford’s In The Style fashion house.

MD Chris said: “We were introduced to Holly by clients Jamie and Adam from In The Style who we do a lot of work with.

“Knowing the type of party that Holly wanted for her engagement they advised her kindly there was only one place to go and that was Scene My Event!”

Holly and Jacob have been dating for the past two years, and Holly recently relocated from her native Teesside to move into the couple’s first home together here in Manchester.

Happy Engagement to my beautiful future wife. Thankyou so much to everybody that attended, you made our night so special❤️

The couple first met when both were holidaying in Ibiza, and it was on a return trip there in June that Macclesfield Town forward Jacob dropped down on one knee to make his romantic wedding proposal to Holly.

And after that flamboyant engagement party at the weekend, friends and fans are getting VERY excited about what will be in store for the couple’s wedding.

No pressure then Holly and Jacob…