Heard the one about the comedian who votes Conservative? 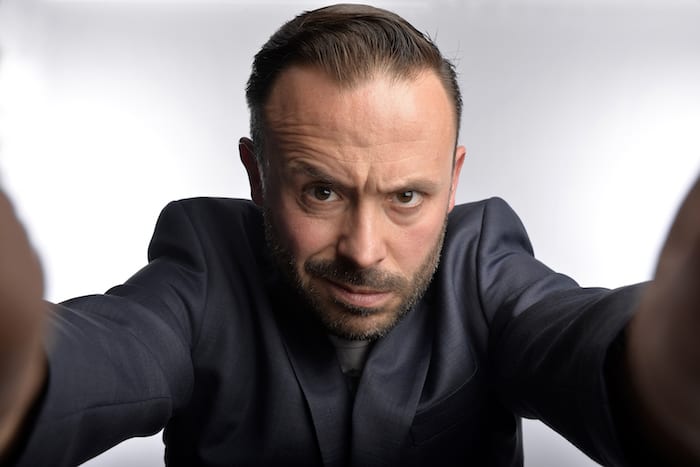 You can usually tell how someone is likely to vote by their occupation. Teachers and social workers are more likely to vote for a left-wing party. Bankers and farmers for a right-wing party. Academics? Left. Estate agents? Right. Probation officers? Left. Police officers? Right. People who work in the media and entertainment industries? Left. Military personnel? Right.

Most comedians are left-wing. Right-wing comedians are about as common as a dry eye in a cinema audience watching Forrest Gump, or a dry seat on the front row of a Justin Bieber concert.

There are one or two who break the mould. Lee Hurst is one. Andrew Lawrence is another. You may not have heard of them as they tend not to be on TV much. There are probably others who prefer to keep quiet about who they vote for.

Geoff Norcott isn’t one of them. He’s one of Britain’s few openly Conservative and Brexit-voting comedians. Not only that, but he’s a class traitor, too – a trade unionist’s son who grew up on a council estate. So maybe he’s just a bit of a rebel.

His comedy credentials are impeccable. His CV features an impressive list of TV writing credits including The Sarah Millican Programme, Live at the Apollo, Alan Carr’s Happy Hour, 8 out of 10 Cats, Stand up for the Week, British Comedy Awards, Katherine Ryan in Ireland, Play to the Whistle, It’s Not Me It’s You and The Now Show on Radio 4.

In his debut tour Conswervative, which arrives at The Lowry later this month, Geoff comes to terms with being a class traitor while also taking uncompromising stances on issues ranging from depression, benefit fraud and the British obsession with the NHS.

The show includes a heckle amnesty which allows members of the audience to raise any issues they have with the show or, indeed, him. For this section, audiences are also encouraged to bring their ideas to save the NHS.

“Would it do any harm if a doctor’s white coat was sponsored in the same way as a Formula 1 racing driver’s jacket?!” wonders Geoff.

How old were you when you came out as a Conservative?

I first voted Conservative in 2010 but looking back I think I was born that way. When Thatcher took away my milk I was disappointed but respected her reasons.

How did your parents react?

My dad was a former trade union man so he wasn’t happy. My mum was a Lib Dem so she was furious but didn’t want to tell me in case it hurt my feelings.

Was it a wise career move?

When I started talking about my politics I just thought it would be an interesting challenge to make it funny. The events of the last few years have turned it into a career move. While political uncertainty hasn’t been good for the country it’s been a real boost for me.

You vote Conservative but you say you’re not and never will be a ‘Tory’. What’s the difference?

‘Tory’ always sounded like a lifestyle to me. There’s a way that they laugh at Boris Johnson’s jokes I could never emulate. I think when you’re working class you can vote for them but I’m not sure I’d fit in at social functions.

Do you get many gigs at universities? Have you had any student protests?

I don’t get many uni bookings….oddly. To be honest I’d love a student protest, it would be great PR. Even if it was only two Crusties I’d paid to be there.

Politically, you’re in the majority in the country – at least if the last general election is anything to go by – but very much in the minority on the comedy scene. Why is the comedy establishment dominated by left-leaning comedians?

I think comedians are mostly terrible human beings who think the very least they can do is vote for the good guys. I’m actually a lovely person so therefore totally at ease with voting like a selfish bastard.

How different are your audiences in different parts of the country?

Some places have strong political identities. Bristol was the most leftie/Remain place so far but was a great show. Manchester is also very strong in both respects. However, I’ve seen how much you guys enjoyed having Tory party conferences here – so let’s see how it goes!

Do you have to be left-leaning to get on a TV comedy show?

Maybe once upon a time, though I think it’s changing. My challenge is someone like Jacob Rees-Mogg ticks both boxes for certain shows. He’s really funny and really Tory. I can’t be more Tory than someone like him so I’ve just got to work on being funnier.

Do people expect you to make racist/sexist/homophobic jokes?

Yes. Which makes my life much easier. All I have to do is not be racist and I’ve already gone up in a left-wing audiences estimations.

Who are your favourite comedians?

It’s a bit of a cliché from comics currently, but it’s hard to look beyond Bill Burr and Louis CK. They manage to combine challenging ideas with mass appeal. Maybe Jeremy Corbyn should watch them for tips.

A bit of both these days. My favourite are the people who come wanting to hate it. A reluctant laugh is a hugely gratifying sound. It means they had a good time despite their best efforts not to.