Grinding Out Success: Grindsmith’s Pete Gibson on Coffee, Community and Bringing People Together 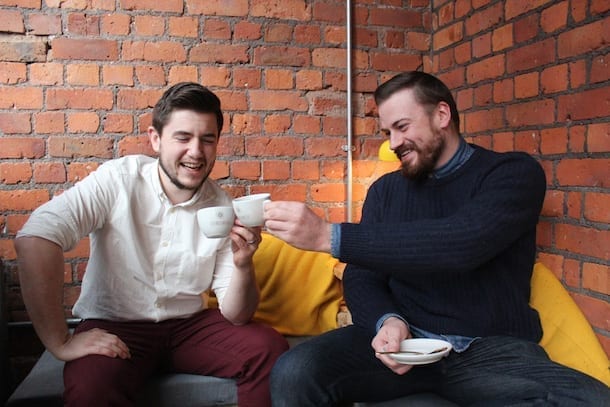 Specialist coffee merchants, Grindsmith, have had a rollercoaster ride since their humble beginnings. Now, as one of Manchester’s most well known coffee houses, they’re about to embark on the next phase of their journey – brand new premises at Media City. Kevin Benson went along to Grindsmith’s Deansgate HQ to find out more.

Having finally made it to my destination, albeit a few minutes late due to rush-hour traffic, I’m able to grab a seat and enjoy a piping hot cappuccino on the house. “Pete will be right with you, he’s just finishing up upstairs,” says one of the barista’s. I actually don’t mind the wait for it gives me an opportunity to a) dry off from the rain, and b) observe the meticulous craft that goes into each drink.

I glance around the place and people watch while I sip away. “God, that’s strong,” I say to myself, a little annoyed for having destroyed the intricately detailed coffee leaf-shaped froth on the surface of my drink. My disappointment in myself is short-lived though, as co-owner Pete Gibson suddenly appears and shakes my hand. “Hi…Kev?. Sorry about the wait…oh cool you’ve got a drink.”

I suspect that it’s this attention to detail and the personal touch which has enabled co-founders, Pete and business partner Luke Tomlinson, to rise so steadily and quickly to where they are today. It’s a marvellous feat considering that their story began little more than two years ago in a garden shed. A swift transition, but has it met their expectations?

“I think if I dug out the original business plan and compared it with what we have now it does not even come close,” says Pete, who by this point has ushered me into one of pods owned by partners and shared-workspace aficionados, Central Working.

“It would just be impossible to map out those coincidental meetings, those relationships that have formed over that period of time. No matter who you are you just could never foresee what Grindsmith has become,” he adds.

It’s seems to me that Pete is as startled by his own success as he is proud. There is none of the pretence and smugness you might expect from the owner of an artisan coffee house, especially one at the heart of Manchester’s tech scene. Perhaps he’s still very much humbled by the Kickstarter campaign that helped get Grindsmith off the ground and into a tiny pod in Greengate Square.

“I think we touched on things at just the right time with Kickstarter. It was this new era of crowdfunding that we had looked into and we wanted to create a business that focused on community and on people. 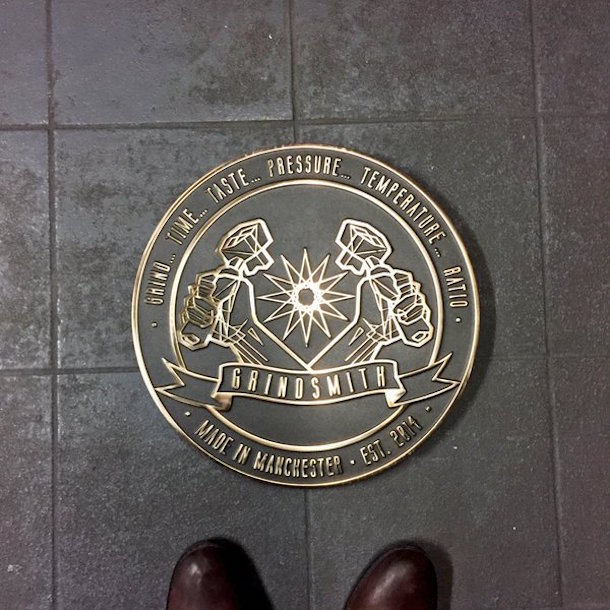 I take another moment to look around the place, and I see what he means. There is no stand-out demographic here. I see the now almost clichéd, lone-hipster busily writing away on a laptop, then I see what looks like a couple on a date and then a few older ladies enjoying some cake and thoroughly engaging in what appears to be a lesson in how to make coffee, delivered enthusiastically by one of the baristas.

“I don’t really care what the demographic is. I just want people to come in and have a nice experience. I was tired of unfriendly coffee shops and cold customer service. People won’t come back if they sense an air of elitism about the place.”

“When people come to Grindsmith, I think they get an understanding of where their money is spent in terms of quality. We really focus on individual service and understanding how best to deliver that service to the different people who enter our shop.

“I want people to come in and learn something. It’s really the core to our business. We aren’t just trying to push a product but trying to educate our customers as to why we chose that particular coffee bean, or how the money is fed back to the farmers.”

I will confess now that this isn’t my first visit to Grindsmith, but I still am unsure as to why I come back. I like working and writing in here, perhaps because it’s on Deansgate and away from the creative cauldron that is the Northern Quarter. I like that Grindsmith has become a permanent fixture in the Great Northern Warehouse, a part of Manchester that’s carving out its own personality with each passing day. Maybe that’s why I like coming here. 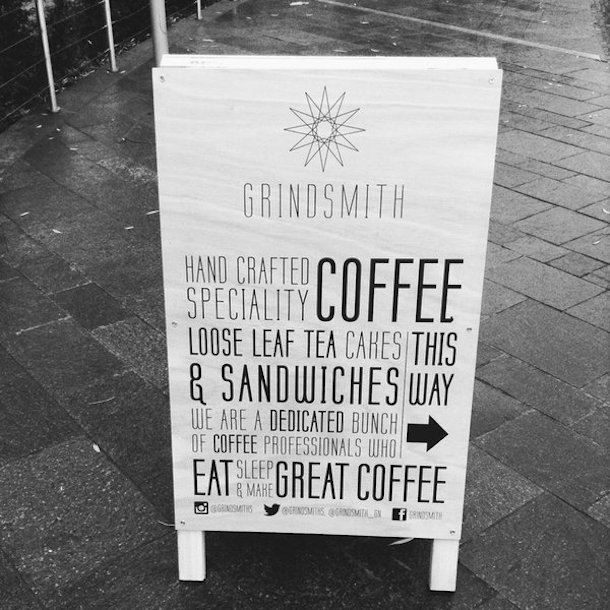 “We are just at the right point in Great Northern’s development as its own quarter in the city. It’s got a nice vibrant feel to it and doesn’t feel like a copy and pasted version of another part of town.”

Very true. I mean, there are plenty of places to go in town for coffee. But for Grindsmith, the competition they face is healthy. Again, it harks back to this community theme.

“Yeah we help each other out. If a competitor rings us asking to lend a few cups, we aren’t going to say no. It goes back to that community feel and I think if you lose that you lose something special.”

Of course, no success story comes without its pitfalls. Yes, timing has been spot on for Grindsmith. They’ve been lucky with the chance meetings and opportunities they’ve encountered along the way. But that all pales in comparison with the sheer amount of effort they have clearly put into making Grindsmith a success.

“I remember the night before we opened. The Barclays executives were coming in the next day to visit the [Barclays] Escalator. The place was upside down and we were literally on our hands and knees scrubbing till 3am. The next day, things were still a bit of a shambles, organisation-wise but we pressed on and it all clicked into place. We thought…’We’ve done it’.

“That was one of the greatest achievements of our business so far. The execs actually did very little business that day as they were enjoying our coffee so much. It was great fun.”