Popping in to your local for ‘a swift half’ at lunchtime or at the end of the working day is a pastime steadily on the decline. It’s increasingly the food that draws customers in. Fast becoming destination venues in their own right, some pubs are notching up awards and accolades and attracting visitors from further afield.

Over the past two months, we have been seeking out the best food pubs our region has to offer, compiling our very own Good Grub Pub Guide to give you the heads up for when you fancy heading out of town and trying somewhere new. Because sometimes a change is as good as a rest, and a pub can be as good as any restaurant.

This week we are catering for hardcore walkers. Chinley and the surrounding area in the High Peak is a popular destination for people who enjoy getting out their Ordnance Survey maps and taking in the breathtaking scenery. It can easily be reached by road and rail, and a pleasant walk along the Goyt River from Marple Bridge. 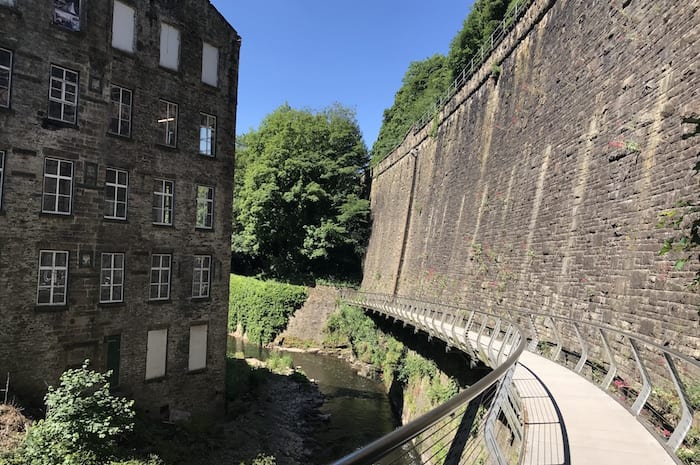 The weather is picture perfect. As we head towards Strines we pass underneath the magnificent railway arches and viaducts which contrast with the green spaces which surround us. Reaching New Mills, we walk on the dramatically cantilevered Millenium Walkway overlooking Torr Vale Mill, the country’s longest working cotton mill (1785 – 2000) which has undergone a major restoration programme over the last few years to become an events space. It’s fantastic.

Leaving the Goyt Valley, the trees become scarcer and the landscape opens out as we enter the last part of our rocky journey uphill to the Cracken Edge. Believe me, it’s worth it. The views are so spectacular and there’s not another soul in sight. Well, apart from the llamas and emus on the way back down the other side into Chinley (which is actually as tough as the way up). 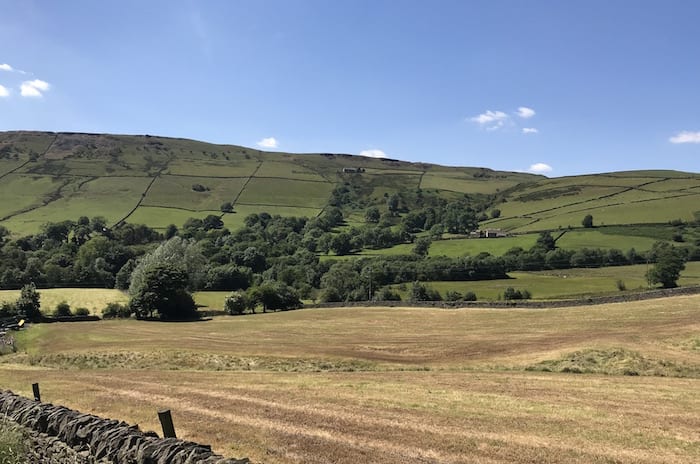 We reach The Old Hall Inn four hours after we set out. Owner Dan was actually born and spent his childhood in this picturesque old coaching inn. It dates back to the 1300’s and has managed to retain its charm whilst somehow still feeling modern and fresh. It’s lovely to enter through the garden where there is ample seating, blankets, bike storage and a stable for anyone who happens to ride here on their horse.

The Inn incorporates two buildings knocked into one. You can eat in the old Elizabethan manor house (Whitehough Hall) which is grand but not at all stuffy. In fact you can eat just about anywhere, including the old kitchen, the dining rooms off the bar, and outside –  they also own the pub next door, The Paper Mill Inn. Between the two venues there are eleven rooms as well as cottages. The place is a hive of activity, and it’s easy to see why it’s so popular. 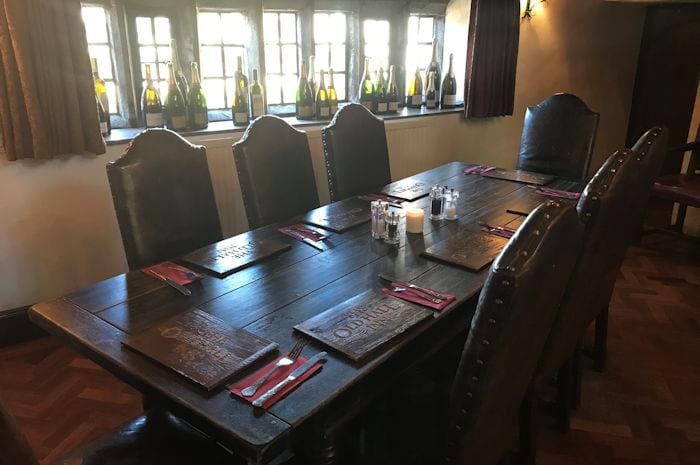 The menus change pretty much every day – the food menus, the beer menus, and the wines they serve by the glass. An inspiring and refreshing kitchen team all get involved  writing the menus, creating new dishes, and learning every prep section to give consistency throughout the week.

Ingredients really are locally sourced, with the meat coming from the head chef’s farm in Kingsterndale. There are eight cask ales that change so frequently that they’ve developed a bit of a reputation for their beer here. They even have their very own Beer and Cider Festival every September. 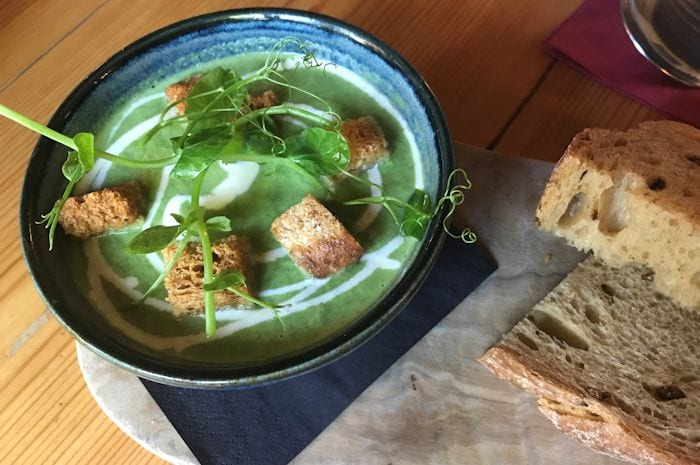 This could have been a perfect summer soup as it was beautifully made and came with very good fresh bread and butter. Alas, it was overheated to the point of nearly boiling which ruined the flavour slightly. By the time it had cooled enough to eat, those lovely croutons had gone soggy. Yes, this one was too hot. 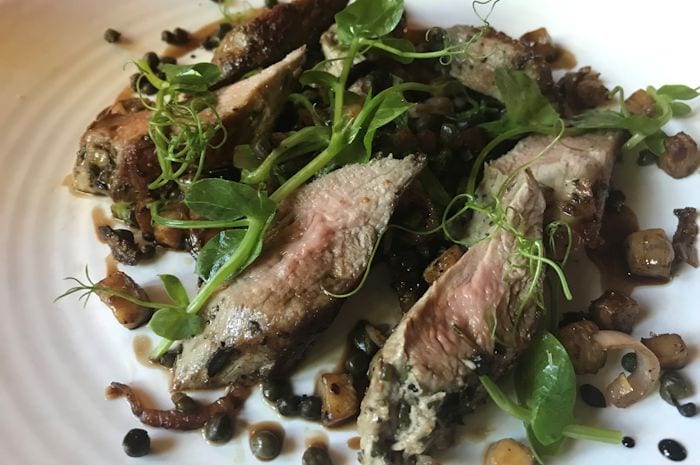 The dish of the day. In fact, my dish of this entire pub guide so far. I’m not sure if I’ve had hogget before as I had to ask what it was. Apparently, it’s the meat from sheep older than a year and it was delightful. Delicate and not dry at all. In other words, not too young and not too old but somewhere in the middle. 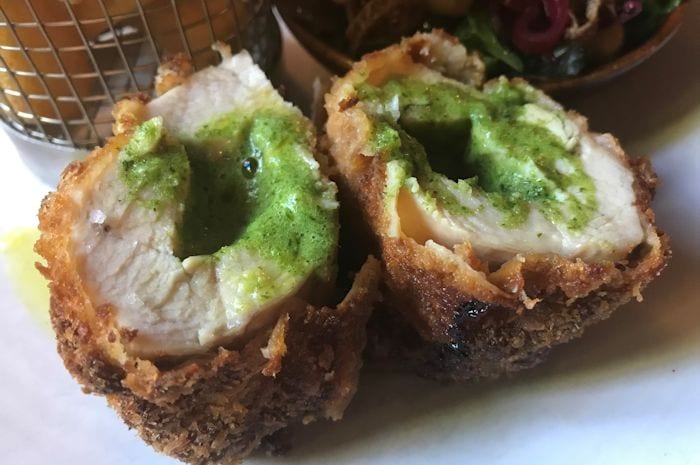 We had toyed with the idea of their homemade pork and beef sausage but they weren’t ready (although we did get a sneaky taste later and they were top quality with hardly any fat) so we decided on this old school classic. Moist, naughty, nice. 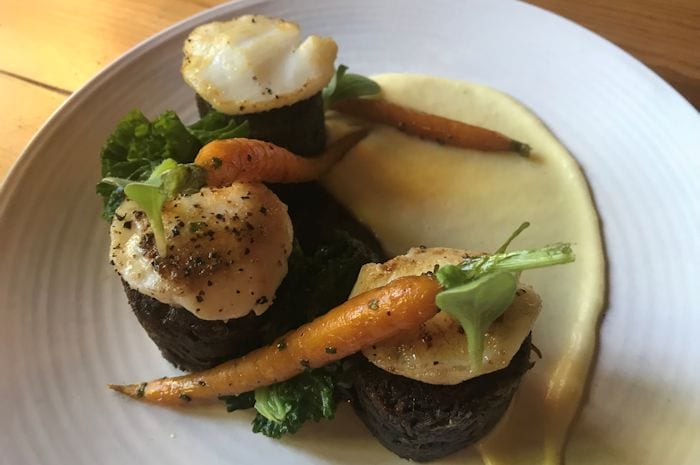 Fantastic flavour and both the cod cheeks and ox were cooked perfectly. As usual, I wanted more gravy – jus, or whatever they call it. Please put more on the plate. They do, however, bring more of that yummy puree (which is basically very, very smooth mash.)
Not only does this place cater to the beer drinkers, it looks after us old winos too. They serve countless wines by the glass including Chateau Musar today (I know!). £7.75 for 250ml and cheap at half the price. 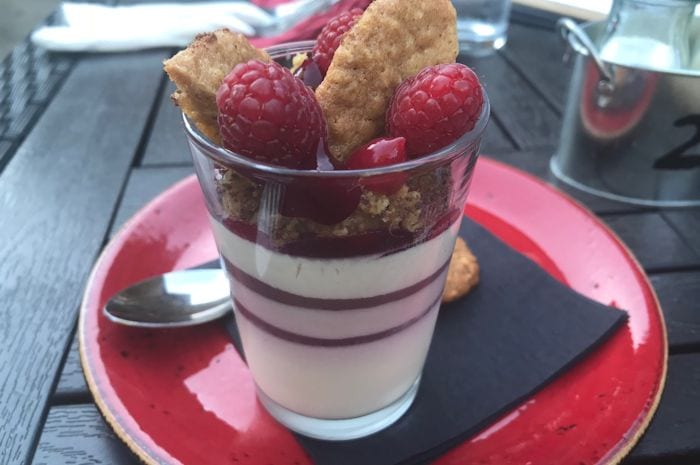 This dessert didn’t quite live up to the savoury dishes. It was decent enough, a good biscuit, but it just didn’t excite me. 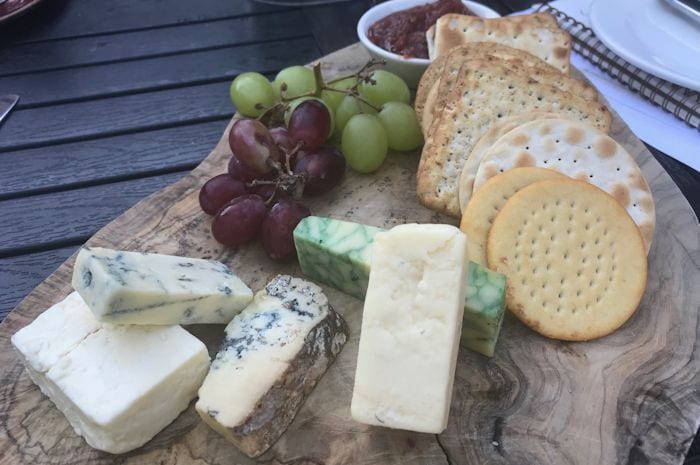 OK I hear you say, they bought cheese and put it on a plate. But you simply have to order it when you come. They give you four award winners, mainly local. Next time I’d prefer to not have the Belton Sage Derby (I don’t like sage, what can I say?) but I’d take the other three any day – Peak Land White, Hartington Bomber, and Hartington Creamery Stilton. Strange Bolognese type dip with it though. Maybe a tangy chutney next time?

Because there will be a next time. The Old Hall Inn is a lovely pub, and a very well run business. The staff are passionate and knowledgeable, and they actually seem to like what they do and where they work. What a brilliant team. The attention to detail makes this place even better, as does the building itself, the garden, the beer, the wine, the food, the rooms, and maybe even the beds. I hear they aren’t too hard and they aren’t too soft but somewhere in the middle and just right – like this pub.