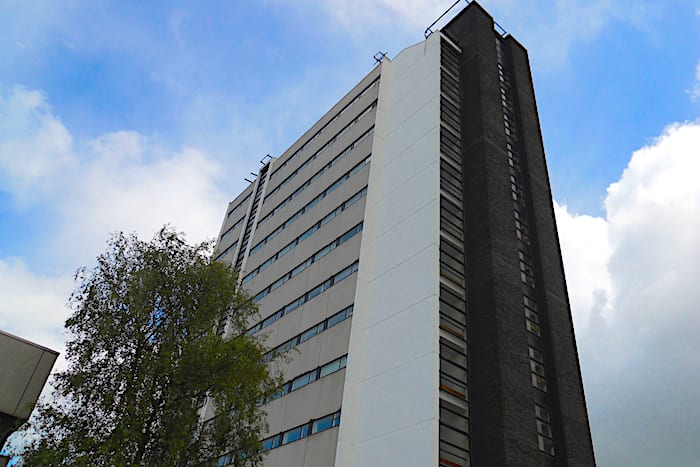 Manchester’s towering monument to Britain’s ambitious bid to develop its own cutting edge computer industry is about to disappear.

The 164-ft, 13 storey landmark building in West Gorton, once home to International Computers Ltd (ICL), is being razed to the ground exactly 50 years after the company was created during what prime minister Harold Wilson called “the white heat of the technological revolution”.

But if the demolition represents the UK’s failure to compete with major world manufacturers like IBM, new high-tech digital media facilities are springing up in its place with the creation of Space Studios, a purpose-built drama hub with over 35,000 sq ft of brand new production stages, as well as nearly 10,000 sq ft of space for offices, dressing rooms, prop storage and make-up.

The developments in West Gorton are in effect an expansion of the Sharp Project in Newton Heath, home to more than 60 digital entrepreneurs and production companies, where four production stages and related facilities have been in operation since 2011.

The latest development at Space Studios in nearby Vaughan Street was the unveiling of Space 06, its sixth sound stage, in February, built at a cost of £14 million. Built specifically for high-end TV and film production, it measures 212 ft by 140 ft and reaches a height of 40ft to its rigging point.

Since opening in 2014, Space Studios has played host to TV hits including The A Word (BBC One), Mount Pleasant (Sky One), Coronation Street (ITV), Dragons Den (BBC Two), Let It Shine (BBC One), Cradle To Grave (BBC Two) and Boy Meets Girl (BBC Two). In addition to this the studios have become first choice for many commercial producers and directors.

“From the start our ambition has been to attract world class productions to Manchester and Space 06’s arrival offers our clients even more opportunity to produce high end television and film in the best possible facilities,” says Colin Johnson, director of screens and facilities at Space Studios.

“With this expansion to Space Studios it means we can provide not just stages but an entire supply chain of support for studio and location-based productions across the north of England.”

ICL was formed in 1968 by the merger of International Computers and Tabulators with English Electric Computers, an initiative of the Labour government’s minister of technology, Tony Benn.

The West Gorton tower was one of the new company’s key locations for the manufacture of mainframe computers – just a couple of miles away from Manchester University where the world’s first stored programme computer, “Baby” was built. The 70th anniversary of its first programme being run falls on 21st June this year.

But by 2002, the ICL name had all but disappeared as the company was acquired by Fujitsu. The Japanese firm moved out of the tower in Wenlock Way, West Gorton in 2005 into newly-developed Central Park in Newton Heath. The building was then used as offices by Manchester city council.

“These latest proposals have the potential to cement the Manchester city region’s reputation as the UK’s creative industry capital and will help us attract major production companies from both the UK and overseas,” said Manchester city council leader, Sir Richard Leese when the plans were first unveiled.

“We estimate that up to 475 jobs could be created at this new site alone, which is fantastic news for the local community. And as well as creating opportunities for them at the expanded Sharp Project, it will also help drive the wider regeneration of the West Gorton area, which in turn will attract more businesses and create even more jobs.”