Greater Manchester Fire and Rescue Service (GMFRS) firefighters and Grenfell Athletic, a team made up of survivors from the Grenfell tragedy, battled it out on the football pitch on Friday evening to raise money for charity.

The final score was 2-1 to GMFRS during the heavily contested match, which saw players Carlos Meakin and Kyle Barrett score goals for the team. Chief Fire Officer Dave Russel also joined the GMFRS team to show his support.

It is the second time the GMFRS team have played a friendly match against the Grenfell Athletic team, with this year’s event taking place at Hyde United Football Club in Tameside on Friday, 12th August. The match was organised to raise funds for charity, with donations on the door going to Grenfell Athletic to support the development of the club, as well as The Fire Fighters charity.

Grenfell Athletic was set up in response to the tragic fire at the 24-storey Grenfell Tower block of flats in North Kensington, London, on 14th June, 2017. The fire caused the deaths of 72 people. The Grenfell Athletic team was founded by Rupert Taylor and aims to support the mental health and solidarity of the group of young men who make up the squad, as well as the families who were bereaved that day. 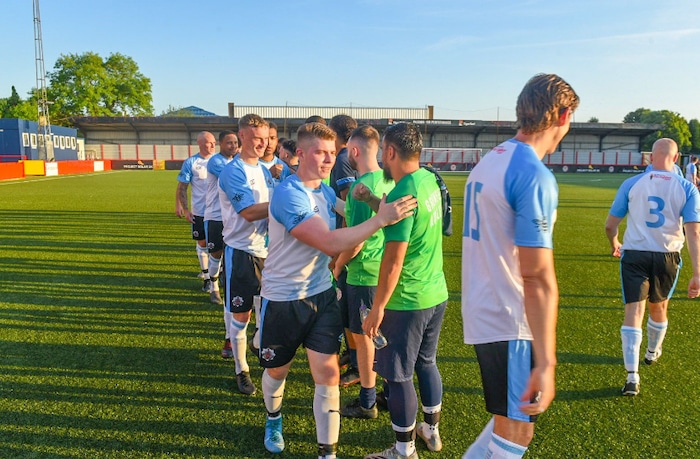 Last year, the team took part in a tour playing against other fire service teams. It was such a success the tour has now become an annual event, with this year other emergency service teams also participating and local football teams, including Northumbria Police, Drumchapel United and London Fire Brigade.

Before the match kicked-off both teams held a 72-second silence in memory of the people who died in the Grenfell tragedy. GMFRS players also wore a unique kit containing the names of fallen UK firefighters to pay tribute to those who lost their lives in the line of duty.

GMFRS is also using the opportunity of the match to raise awareness of the ongoing work of Greater Manchester’s High Rise and Building Safety Taskforce. In wake of the Grenfell fire, Mayor of Greater Manchester Andy Burnham launched the taskforce to ensure all residents homes were made safe as quickly as possible.

The taskforce, led by Deputy Mayor of Greater Manchester Paul Dennett, is currently working to ensure that the changes in legislation coming into force from January 2023 which affect flats and other multi-occupied buildings deliver improved safety for residents and that remediation of high rise buildings continues with residents protected from the costs.