From Madrid to Manchester – meet the Spanish community 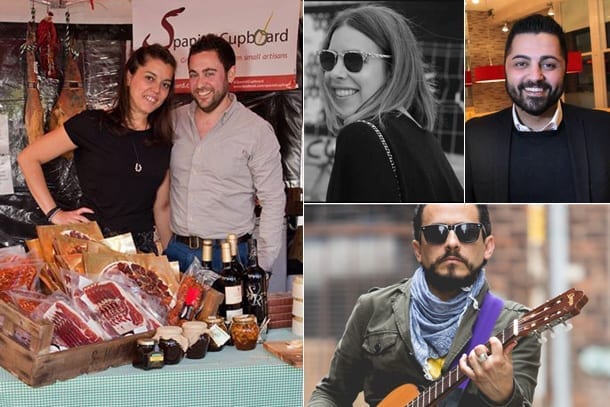 As Manchester prepares to celebrate Festejar, Laurence Fitzgerald meets members of the Spanish community who have chosen to make the city their home…

“Why do English people say sorry, when they don’t mean it?” asked a Spanish man outside Sinclair’s Oyster Bar in Shambles Square. It’s a popular rendezvous for the Spanish community in Manchester.

I shrug. “I don’t know, maybe they mean it. What other cultural differences have you noticed?”

He pauses, clocks his surroundings and then says, “Going out at 7 and finishing the night early. At home we don’t go out until 10, sometimes later.”

Suddenly, and typically English, a fight spills out on to the street. It’s not even closing time. The barman tries to defuse the situation as the tattooed drunk stumbles around, shouting obscenities into the warm night air.

“Do people here drink more than in Spain,” I ask, a little embarrassed at our national stereotype, knowing full well the answer.

“Don’t ask me, I’m from Italy,” he replied. “The English drink more than anybody, don’t they?”

To say that Spain is in the mierda is a bit of an understatement. It has one of the lowest birth rates in the world at 1.2 children per woman; an unemployment rate hovering around 24.8 per cent; a shrinking and ageing population, with hundreds of thousands of young people fleeing to look for work elsewhere. Understandably many are worried that their countrymen are lost to their host nation.

How many have left Spain is difficult to tell. Suffice to say mass emigration on this scale hasn’t been seen since the Second World War. Before that – apart from those fleeing Franco’s regime – emigration from Spain had been rare. As an attractive half- Colombian Spanish lady tells me, “things are so bad in Spain that people are actually relocating to South America.” This time they’re looking for jobs, not gold.

Not everyone sees this exodus of Spanish youth as a bad thing. A case in point is Yashin Dadashnejad, an affable and articulate man from Tenerife who moved to Manchester ten years ago. He tells me it’s been good for both Spaniards and Mancunians that so many of his fellow citizens have relocated here.

“Before, you had many Asians but perhaps the city was lacking people from different parts of Europe. Now, Manchester has people from other cultures it didn’t have before.”

Having originally worked in one of the Spanish restaurant chains – “you know the ones I mean, where it’s not really Spanish food, and quality is poor” – he wanted to bring some of the authentic stuff to the city, so eight months ago he opened La Bandera with his brother. The restaurant has received rave reviews and has become popular with Spanish footballers resident in the city.

So, how’s the Spanish community changed since he arrived?

“When I first came to Manchester, at Uni there was a Spanish society of only six people, and another online community run by a guy from Barcelona, we used to meet up every Thursday, at a place called the Retro bar.” Times have changed. “Now you can find Spaniards all over the place. Sinclair’s is popular.”

In Spain, corruption and welfare are a major issue. “You can work for a year and live off benefits for a year after that – with something like 90 per cent of your wage. I don’t think that helps.”

Elena is a 27-year-old Elena Spanish teacher at the Instituto Cervantes. She didn’t know much about Manchester or indeed the UK before she came. “I don’t have a lot of English friends,” she says, “it’s difficult when you’re here, especially when working around Spanish people.”

The institute is much bigger than I expected. Two levels, over a dozen goldfish style classrooms (i.e. made of glass) and even a massive hall at the far end. I pick up a promotional leaflet advising me to learn Spanish for a job in one of the emerging markets of Latin America.

How has her life changed since moving here four years ago?

“My habits haven’t changed a lot, I’m living like I was in Spain, but with different weather.”

Many Spanish immigrants who come to Manchester, like Elena, are educated – engineers, teachers and nurses, who can’t find decent jobs in Spain, but hope to progress in their chosen career path. Many just end up working menial jobs.

“Now in Spain it is really important for companies to employ people that speak English. When people finish their degree they don’t know what to do, so they decide to come here to work or to improve their English.” She doesn’t know if she’ll return home anytime soon. She likes her job and life in the city.

Beatriz Santos is a Spanish journalist who works in marketing at a law firm in Manchester. She is the co-founder of elnorthern.com, the only digital newspaper in Spanish for the north of England.

“A few weeks ago I was having breakfast at work as usual, and one colleague freaked out as I was having cereals with coffee, for her it was pretty amusing.”

Beatriz has travelled widely and didn’t find adjusting to life in Manchester a problem. Although she came here to live four years ago, she first visited the city when she was 11-years-old.

“From what I can recall the city has grown quite a lot, in a good way. My first impressions were of a city with huge opportunities and a vibrant leisure life.”

Like Elena, she’s not sure whether she’ll return home, “I’m not in any rush. I miss my family and friends and some bits of food, but I do get them whenever I go back home or someone visits me.”

It’s getting late. The bar has called last orders. It’s time to go home. The drunk just left – he came back for a second round – staggering into the darkness like an actor leaving his stage.

I turn round to ask my amigo another question, but he’s chattering away to the happy and vocal group of friends he came with.

“What do you love about Manchester?” I ask Beatriz. “I can’t say one thing, it’s impossible. The people, the culture and the work opportunities – but not in any certain order.”

What is certain, though, is that as one high profile Spanish resident of Manchester prepares to return home, many of his compatriots rather like it here and are here to stay.