Review: Friendsical at the Lowry ‘celebrates iconic lines and scenes of the 90s classic show’

This week in Salford, tucked away in The Lowry’s Quays Theatre is a peculiar show paying great homage to one of the most beloved sitcoms of the nineties 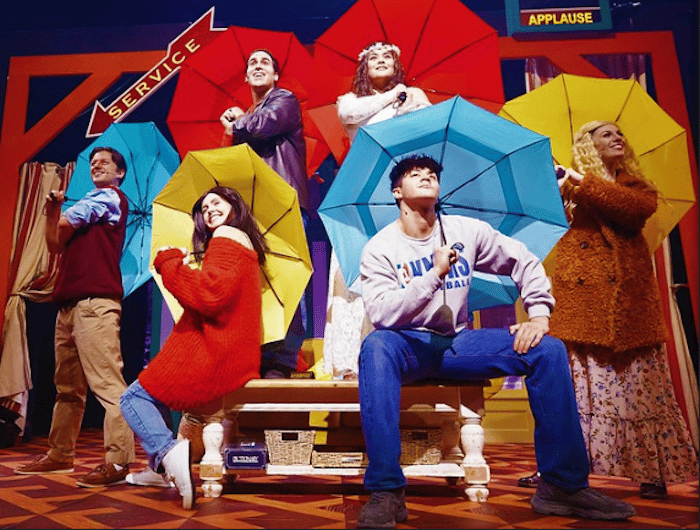 Friendsical – A Parody Musical about Friends is a two- and a-bit hour spectacle that takes a deep dive into the highs and lows of Ross and Rachel’s on again, off again relationship and incorporates all the iconic lines and scenes that fans recognise and still love today.

Director, writer, and lyricist Miranda Larson and composer Barrie Bignold along with the rest of the creative team have collaborated to make something completely unique and unlike anything you’ve seen before.

Taking you back in time to the 90s and starting roughly right at the beginning of episode one, Doctor Ross Geller (Ph.D.) introduces himself, and then directly addresses the audience as active members of the performance, positioning them as the live studio audience that features so prominently in the sitcom.

Though you may think 90s TV may be a bit dried up and stale for modern audiences, they acknowledge this and explain it away as a reflection of the time.

Friendsical is a whistle-stop tour of they key parts of Ross and Rachel’s rocky relationship (according to Ross), with messed up timelines and crossovers of the multiple seasons, all of which, however, is easily swallowed by the audience as the cast clearly and repetitively acknowledge the changes made within alternative reconstruction.

And, of course, it wouldn’t be a musical without songs! Original songs such as (He’s her) Lobster!, Richard’s Moustache, and You’re Under Me, When Were You Over Me? are each funny, upbeat, and light hearted, allowing for dramatic time jumps and further progression to develop while keeping to the rhythm of the storyline.

The exciting news about casting in this production is that on this tour, each location has special guests that feature!

If you wish for the guest stars to remain a surprise, I recommend skipping the next few lines! While Friendsical is at The Lowry, the special guests are Louise Redknapp who is on evening performances from 3rd – 5th November, and the other very special guest is Ella Vaday who takes on matinees on the 4th and 5th November.

If you have the pleasure of attending a performance featuring Vaday, you are in for a real treat. She is hilarious and adds something fresh to the storyline when she is present on stage.

Ross is portrayed by Nelson Bettencourt, who greatly pulls off many of the quirks familiar with the character, such as the extremely over-gelled hair, and leather pants. 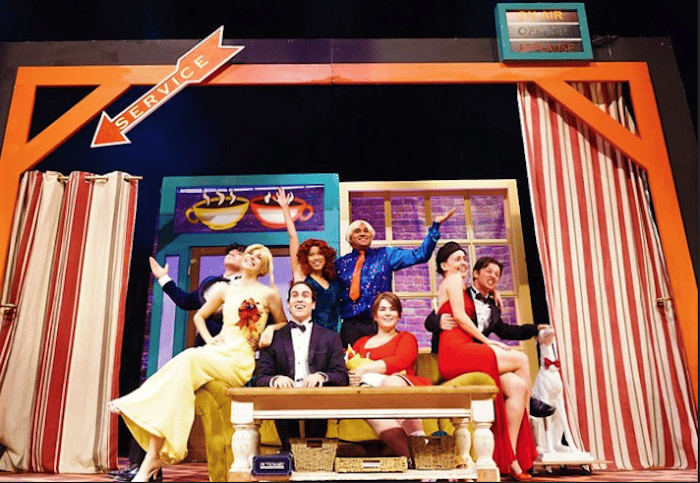 Sarah Michelle-Kelly is exceptionally good as Monica, being that she is the greatest look alike to her character (played by Courteney Cox in Friends) and has the personality and mannerisms nailed.

Tim Edwards has the voice, movements, and gestures of Chandler down to a T, and Ally Retberg never breaks character and employs all of Phoebe’s quirks and dances at all the right times.

The lovable Joey is played by Sario Solomon who is just as lovable but maybe uses too much of an Italian American accent than what is required of the character.

As well as the main six, Olivia Williamson and Tanveer Singh Devgun take on the complex roles of playing crew that become cast, ensemble, and side characters, like Gunther and Julie.

The stage is set up with a small counter, not unlike that of Central Perk, with remains in place throughout on the left side of the stage. Towards the back is the door to Chandler’s bedroom that has been sawn in two, and a squashy pale-yellow couch sits centre stage for scenes taking place in Central Perk and Monica’s apartment, of which the two settings can be differentiated depending on the cushions that dress the sofa.

The only times the couch is swapped out is when Chandler and Joey’s Barcaloungers are rolled onto set. The settings and props are effective and pleasing for audiences as they feature iconic pieces that can be recognised from the sitcom.

In terms of costumes, while some of the outfits are fantastic both in replication and representation of the characters, the wigs are a little off. But maybe that’s the point!

Overall, Friendsical is a fun evening out! You may get more out of it if you are familiar with the original American TV series, as there are many small details and references that go without explanation.

Almost the entire script is made up of bits and pieces that have been taken from the dialogue across the series and then mashed together, so fans will predict what is going to be said next.

The show is incredibly self-aware, acknowledging the flaws within their retelling, and adapting dated pieces of the series to better suit the values of modern-day audiences. Friendsical – A Parody Musical about Friends is playing at the Quays Theatre in The Lowry until Saturday 5th November 2022, tickets start at £18 for weeknight evening performances, and begin at £23 for weekend showings.

They can be purchased by clicking here.