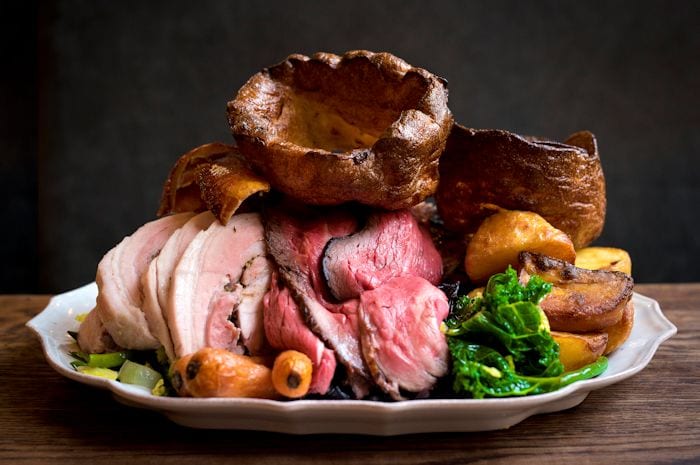 I think it was Shakespeare who wrote “A roast by any other name would taste as sweet.” Or maybe it was Jamie Oliver.

Anyway, I like to think I’m a bit of an expert on the good old Sunday lunch in Manchester, having tried one or two for the Battle of the Sunday Roasts feature we ran last year. I searched high and low to find the most succulent roast beef, the lightest Yorkshire puddings, the best roasties that were crunchy outside but oh so fluffy inside, the freshest, most colourful vegetables, and the richest stocky gravy to coat it all in.

It was a close run thing, with Gorilla bagging gold for their fantastic food, service, comfort, and value. But how would this lot have fared? 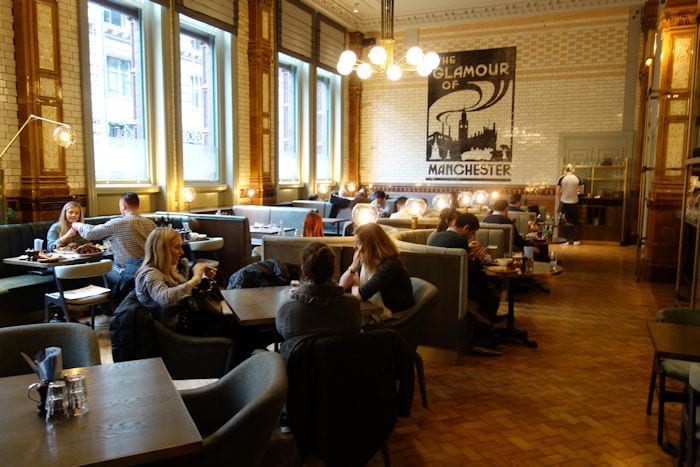 Over the past six months, Refuge by Volta have established themselves as a bit of an all-rounder with their ‘Come As You Are’ tagline and beautiful setting. Whether it’s coffee and a paper in the winter garden, cocktails in the main bar, or some interesting plates to share in the main dining room, there’s something for everyone if you’re out with friends, work colleagues, loved ones or family.

We’ve been a few times since the launch last year. The product has never really been in question, more some nitty gritty service issues that needed tightening up. So although we were looking forward to trying their newly launched Sunday lunch, we were also curious to see if these teething issues had been ironed out.

That’s nearly £20 each so at the top end of what you would normally pay across Manchester, but when it arrives you can see why. There’s enough food to feed three, maybe four depending on your appetites.

What we immediately didn’t like was the way it’s served – all piled up on quite a small plate so you can’t actually see everything and in no way doing it justice. 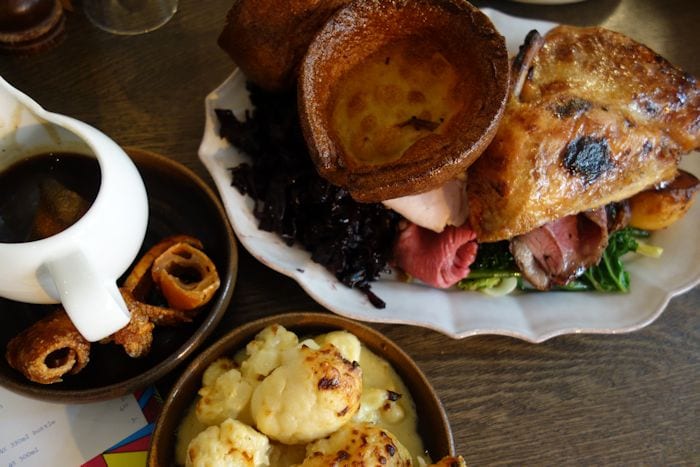 I’m unsure if this is how they serve the platter in Volta Didsbury as I’ve never been there on a Sunday, but I do think in this setting the whole thing needs refining. A bigger board with some serving spoons to make it feel a bit more special and considered?

Because it’s good. Really good. Of the meats, the chicken is the best – moist, buttery and garlicky with a nice crisp skin. Suckling pig has been cooked with fennel – it’s unusual but works brilliantly with some naughty crackling on the side. Yum. The beef is top quality, sliced thinly, and cooked just over rare as it should be, but not as interesting as the other two meats.

Yorkshire puddings are ok but not the best thing on the plate. A bit too light and crisp, I think they’d been in the over slightly too long. And a good old gravy boat so you can throw on as much as you like – lots in my case.

I need a whole section now just to talk about the vegetables as they were the star of the show. No soggy afterthoughts here. Vimto red cabbage was a revelation. I hate Vimto but I loved this cabbage. Sweet and spicy and Christmassy even. Maybe fish out those cloves though as I bit into two. Sweet roasted parsnips fluffy and soft, very green buttered spring cabbage, earthy baby carrots, cheesy cauliflower cheese, and some fantastic crispy roast potatoes. I would have been happy just to eat the veg. Lovely! 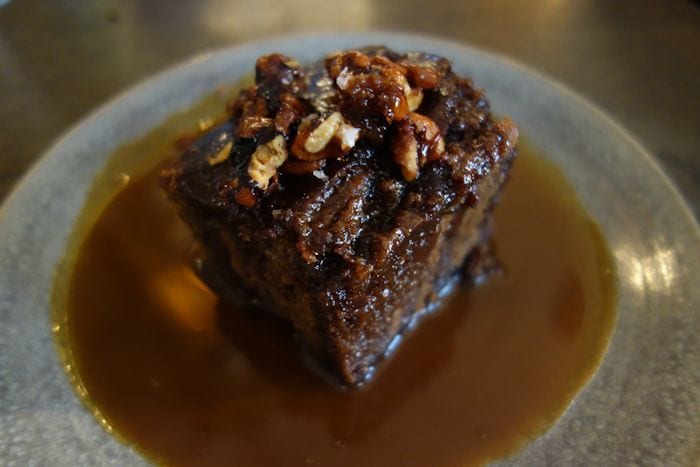 For desserts we squeezed in the new Sticky Toffee Pudding (it’s not on the menu yet so I’m unsure of the price although most of them are in the £6 region). The pudding looked magnificent, and was light and moist with candied walnuts on top, with sauce not too sweet or sickly.

We also shared the cheese board (£12), a selection of British and European cheeses including Shorrocks Bomb, Wookey Hole, Blue Monday and Taleggio – no cooking involved but a pretty decent selection with quince, pickles and nuts.

We washed down the lot with a carafe of superb Spanish Albarino, Domingo Martin, Rias Baixas (£12.70 375ml.)

Can you have too much of a good thing? We probably only ate about two thirds of everything – and that was us being greedy and not wanting to waste it – so portions and pricing could be looked at, although I can’t really fault the product.

Everything is sourced well, cooked well, and considered – just great food. But service let us down slightly again, little errors here and there. The staff may be friendly but they really need a decent GM to drill in standard points of service and kick them into shape, to make the place as good as it should be. As today was the first time they were serving the roasts there were bound to be a couple of glitches, so we’re prepared to overlook them as the food was so good.