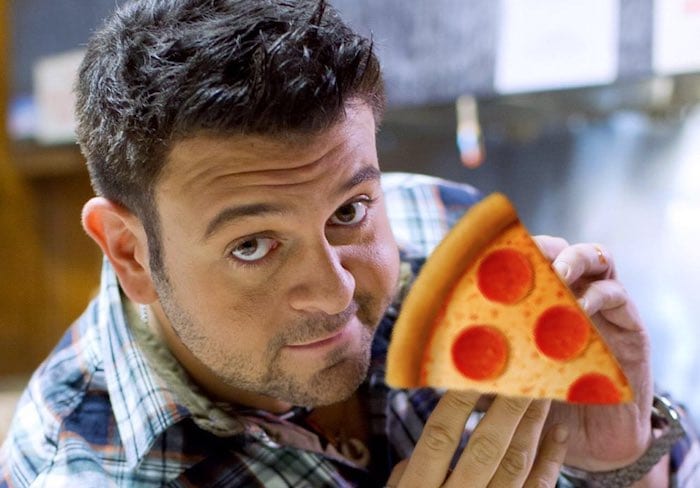 As you may know, a 10-day food and booze tour of Manchester is being launched by new street food-inspired sauce Meat Lust. Exclusive miniature dishes, using the Meat Lust sauces, will be created to showcase the very essence of their menu.

Featuring on the tour will be Adam Richman. Almost a decade ago (feel old yet?), his lad-next-door face went hand in hand with the belly busting feats of his show Man vs Food, where he ate his way across the States.

Adam was faced with some of the biggest portions, greasiest pizzas and spiciest food the nation had to offer, from sandwiches with fillings cheesier than your dad’s jokes to burgers not much smaller than a newborn baby.

Our favourite cheeky chappie from across the water finally packed in the show after four seasons in 2012. Probably a good thing too, as heart disease is no laughing matter.

But he’s here. Yes. Right here in our fair city looking pretty dapper standing by Salford Lads Club as part of his Sauce and the City mouthwatering tour. 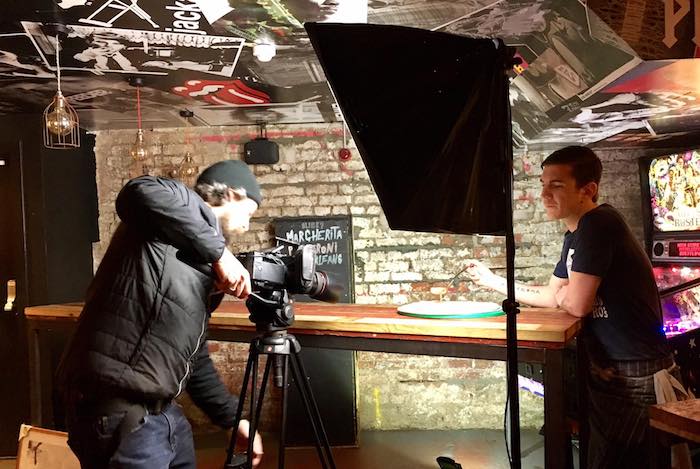 But, we’ve just heard on the grapevine that diners heading to Crazy Pedro’s tonight might see Adam sooner than expected.

The self-proclaimed food enthusiast is set to be filming at the Northern Quarter pizza haunt between 6pm and 8pm this evening as he chomps his way through a specially designed Man v Pedro’s pizza.

Richman is no stranger to pizza challenges. A few years ago he devoured the epic 22″ pizza at Randy’s Wooster St. Pizza Shop which was stuffed with everything from broccoli to pepperoni to melt in the mouth stringy cheese and weighed in at about 10 pounds. He completed it with exactly 1 second to spare and probably spent the rest of the day nursing a pretty decent food baby and curing a food coma.

We’re filming something super cool & secret on Wednesday at 6.15pm in Pedros NQ!

Well slap my knee and call me Sally, you’ll probably want to cancel your evening plans and get yourself down to the NQ. According to the twittersphere, this ‘special guest’ starts filming around 6.15pm on the dot. Now, we’re not starting any rumours here but could it be for Adam Richman’s super cool new show? We think so.

Might want to keep your iPhone charged and Instagram hand strong as you’ll very likely find yourself selfie-ing with the original and the best food challenger.