Darkness and Light: Exploring the Gothic at John Rylands Library 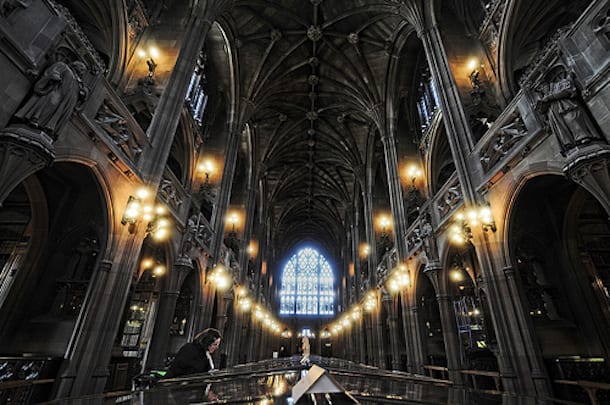 “Near the mouth of the subterraneous cavern, she approached the door that had been opened; but a sudden gust of wind that met her at the door extinguished her lamp, and left her in total darkness.” As the sunlight fades and the days get shorter, Emily Oldfield explores the Gothic at the Darkness and Light exhibition at the John Rylands Library…

Darkness and Light explores the vast influence of the Gothic in literature, architecture, anatomy, gender, and its revival. The Gothic is a cultural style, especially in fiction, known for its chilling darkness.

Entering the exhibition is a bit like opening a Gothic novel itself. All it takes is a trip up some unassuming stairs to be plunged into the tunnelling corridors of this impressive 19th century building and rooms rich with Gothic treasures.

At first it was hard to see where the light was. Not that that’s a bad thing. Fans of the weird and wonderful have plenty to get their teeth into with fine editions of the dark fictions Frankenstein and Dracula adding to the feast. 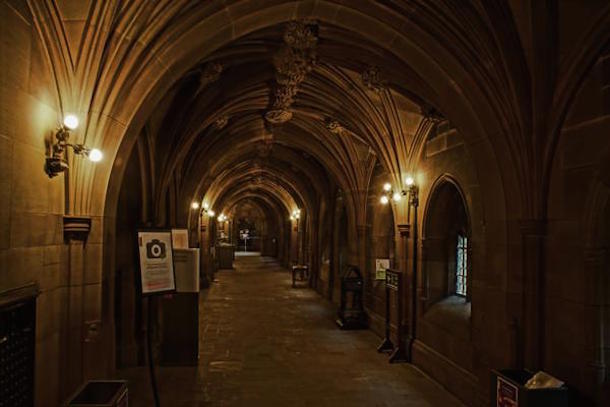 Also on display is a first edition The Castle of Otranto (1764), the book quoted at the beginning of this article, considered to be the first Gothic novel. With tales of blackness, bloodshed and beasts all around, it felt like the perfect preparation for Halloween. I’d dare anyone to spend a night in there! Horror-lovers may also like to linger longer over the eighteenth century illustrations of surgical tools including some scary-looking saws and spanners. I did not even want to think about what they were used for.

But the ‘light’ of the Gothic is exactly that. It was an era which brought purpose, enlightenment and exploration. Authors were not the only explorers, as controversial as they were, going against ‘respectable’ Christian culture with tales of terror and torture.

It was medical advancements which played a massive role, especially in operation and dissection. It was certainly enlightening – and more than a little frightening – to look over the works and pictures of Andreas Vesalius, a founder of modern anatomical studies. His hand-drawn illustrations, some from as early as 1543, show leering skeletons which would have been terrifying at the time.

It is in travelling through time in the exhibition, running along the main corridor and also in the historic reading room, that you become aware of the balance of ‘darkness’ and ‘light’ on display. Not only is there the ‘dark’ feel of artefacts from a variety of places and ages, but a ‘light’ way in which they are displayed – well-presented, with plenty of illuminating information alongside.

Also there is the darkness of old as well as the lightness of new, with contemporary Gothic art from students at the University of Salford. Rosie Garland, the renowned Gothic novel writer, has also made a selection of pieces to illuminate women and the Gothic.

Gothic lives on. Even though the surroundings are old, the exhibition explores the new, too – what Gothic means to people today. In the atrium of the library, a photographic gallery of modern Goths pays homage to a culture which hasn’t died.

It’s clear that much of Manchester’s creative culture draws influences from the Gothic, and this exhibition gives you the chance to see it for yourself and some amazing artefacts. It’s by dealing with the darkness that you find the light. So why not see it for yourself?