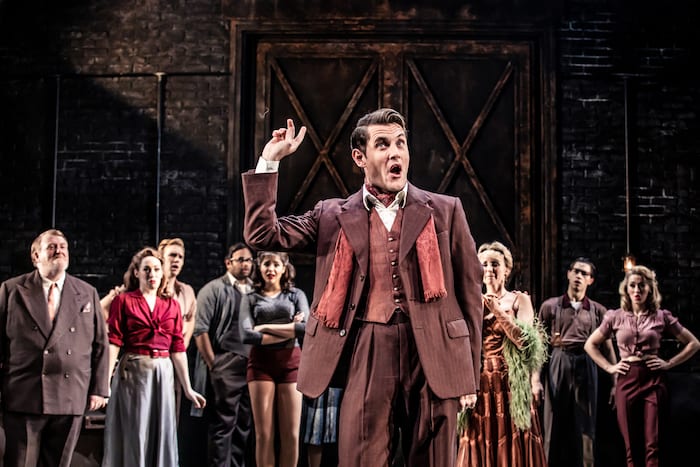 On the day that Coleen Rooney was dubbed Wagatha Christie for her super sleuth detection on Instagram, the Kander and Ebb musical-whodunnit Curtains starring Jason Manford opened in Manchester.

This delightfully old-fashioned murder mystery first appeared in Los Angeles in 2006 before opening on Broadway the following year featuring Frasier star David Hyde Pierce, who received a Tony award nomination for his role as the lead.

The plot is a parody of those murder mysteries which do not want to die. With a remake of Death on the Nile headed to cinemas soon, the appetite is clearly still strong for these page turners.

The show is set in Boston in the late 1950s and against the backdrop of the theatre, as a production of Robbin’ Hood is about to finish. The cast take their bows and Jessica Cranshaw, a talentless cast member, collapses and dies. The actors and crew do not seem that upset, and the scene is set for a murder inquiry.

Musical fan Lieutenant Frank Cioffi (Jason Manford) is assigned to the case and the usual suspects are lined up. Their behaviour is analysed and clues are pored over, as the search for the curtain call killer begins. But guess what? The company start dropping like flies…

Robert Holmes has written a show which has a nice twist with the detective more interested in helping direct Robbin’ Hood than he does solving the murder. This provides Jason Manford with plenty of great gags and he excels on every level. He’s a good dancer, holds a tune well and also has the ability to step back and let the many other excellent cast members step forward and grab a piece of the limelight.

The songs of Kander and Ebb have the trademark lyrics which have punchlines and leave you smiling. The music has an old school quality to it and at times reminds you of their hit Chicago.

But, in terms of earworms, there are not many songs here that stick with you. There is a great song called What Kind of Man which begins as a hate song about critics who give bad reviews which turns into a love song when a good notice appears. Sounds familiar.

Paul Foster has a tough task directing this production, as it is very long and you never really know whether the focus is on sending up the classic Agatha Christie-style plot developments or the backstage antics of the cast working on a troubled musical.

The other problem is that Robbin Hood’ has none of the car crash moments of the fictional musical Springtime for Hitler from The Producers, nor is it slick or memorable enough to work on its own merits.

The cast work incredibly hard and are worth seeing and there are plenty of laughs to keep you going.

Samuel Holmes is undoubtably the star of the show, as the fussy director, dropping one-liners like bombs and walking away as the debris hits the people he is insulting. He is excellent, as is Rebecca Lock as Carmen Bernstein, one of the show’s prickly producers.

Her daughter, played with a truly cheeky and rebellious streak by Emma Caffrey, goes by the stage name Bambi. When her mother questions why she chose this awful name, she replies that Bambi’s mother is killed by hunters, setting the tone for the clever comedy that ensues throughout.

Carley Stenson is also in great voice as Georgia Hendricks, but this is a big cast whose main function is to be a suspect, so she is often in the background, which is a shame as you find yourself wanting to see and hear more from her.

TV and radio’s Ore Oduba appears as a star name due to his turn on Strictly and acquits himself well in a small role, but there is a missed opportunity here as fans will have wanted to see him dance.

Curtains is quaint, harmless fun and it’s delivered with tongue firmly planted in cheek by the brilliant cast. The ensemble are excellent, filling the stage with their marvellous moves.

But will it stay in your memory? I’m already back thinking about Wagatha Christie, so I’m not so sure.

Curtains is at The Palace Theatre until 12th October.