What better place to locate vegan food wagon Cowherds than Greengate Square, Salford, a stone’s throw from the birthplace of vegetarianism? 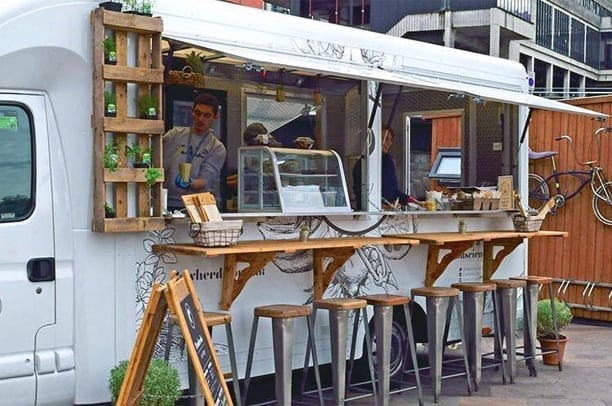 If you’ve seen the Cowherds mobile food wagon in Greengate Square you could be forgiven for thinking it serves burgers, hot dogs or maybe steak sandwiches. But you’d be wrong. In fact, nothing could be further from the truth. The kind of food they serve – healthy food, juices and snacks – proves that fast food doesn’t have to be unhealthy.

…fast food
doesn’t have
to be unhealthy

And if you thought that vegan food is bland and boring, you’d be wrong again because Paula Maguire and Jon Smyth serve up brilliant meat-free breakfasts and lunches from 8am till 2pm throughout the week

Fancy a healthy lunch? What about a Thai green curry or a massive super salad which puts the supermarket variety to shame) followed by a raw caramel slice (dates, almonds, coconut oil, tahini, rice bran syrup, cashews and cocoa powder) which tastes even better than cake.

You can even enjoy a shot or two – strictly non-alcoholic, of course.

The wagon is named after Reverend William Cowherd, a pioneer of vegetarianism, who urged his congregation at the Bible Christian Church in King Street to abstain from eating meat and drinking alcohol.

Following Cowherd’s death in 1816, Joseph Brotherton, who went on to become Salford’s first MP, continued his mission and, along with other Cowherdites, helped form the Vegetarian Society in 1847.

Paula and Jon are passionate about sharing the benefits of a meat-free diet. Paula was diagnosed with potentially life-changing ulcerative colitis 13 years ago, but since taking up a vegan lifestyle, she no longer needs to take medication to cope with her condition.

Setting up Cowherds in Salford, initially on a pop-up basis in 2014, seemed like a way to share the positivity in the place where she grew up but where over half the population is overweight or obese – a major risk factor for type 2 diabetes.

“We wanted the business to have a social impact because we grew up in Salford and are proud of our roots,” says Paula. “When we found out the exciting fact about Reverend Cowherd and his influence on the vegetarian movement here, it seemed like a perfect fit.

“We want to give Salford something to be proud of as it gets a lot of bad press and to help people to take control of their own health through education and, of course, food.”

When they’re not serving up great grub they are busy spreading the good news about vegan food, using the wagon to bring cookery workshops to places such as Ordsall community centre, Broughton Hub and Islington Primary School.

Other projects include work with mental health charity blueSCI, Sow The City initiative and City West Housing Association, offering food for residents who cannot get out themselves.

Paula and Jon are both fully-qualified juice therapists with a fruitful future planned. They recently received the keys to their intriguing ‘Juice Factory’ (“Rather like a modern day Charlie and The Chocolate Factory but with chocolate being so last season,” says Paula), and plan to launch ‘The Farm’, an animal sanctuary saving animals from slaughter.

They will soon be getting a pod to replace the lunch wagon. This will mean they will have more space and a seating area for people to relax and enjoy their healthy food and drinks, and they’ll be open longer hours including weekends.

Why not check out their website and pay them a visit www.cowherds.org.uk