Instead, people running street kitchens are being urged to use an alternative location from the beginning of August under “new arrangements” detailed this week.

A city council spokesman said “Piccadilly Gardens, a large an busy public space which has experienced some issues with anti-social behaviour, is not a suitable location for activities which can attract large numbers of vulnerable people including people who are sleeping rough.”

Piccadilly Gardens, which has attracted widespread criticism since its redesign, is particularly busy on sunny summer days, often visited by hundreds of people taking a break from work or shopping. 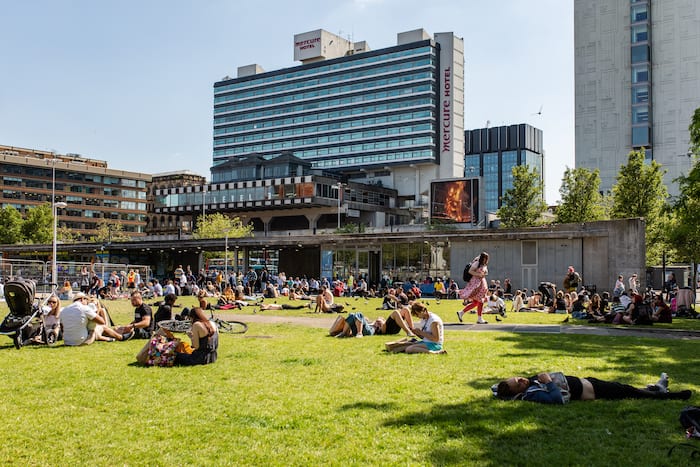 In an obvious attempt to separate users of street kitchens from mainstream visitors to the gardens, groups setting up such facilities – whether on a regular or ad hoc basis – are being offered the use of Manchester Central Fire Station car park, which the council says is a more appropriate and self-contained venue.

Regular street kitchens are being notified about the new arrangements. The Council, via the Manchester Homelessness Partnership, is keen to work with any street kitchens in the city to help them better link their work in with other support services for homeless people and others in need.

Sue Murphy, deputy leader of Manchester City Council, said: “We know that people running street kitchens care and want to help. But we are clear that Piccadilly Gardens is not the right place to do this.

“This is an issue about where people are setting street kitchens up – not what they are doing.

“But what we do want to do, wherever possible, is help ensure that people using street kitchens are connected with other services which can give them a package of wider support – ideally in a safe and warm indoor setting.

“We want to work with any groups operating street kitchens to identify how and where they can best do this and build better relationships with them.

“We know there are some people who have been sleeping rough long term and will only accept this kind of informal help. We don’t want to stop them accessing this provision but we do want to link them in with other services which can gain build a relationship with them and provide fuller support.

Sam Jones, managing director of Tunafish Media, who co-founded the homeless charity NotJustSoup in 2015, made the move away from Piccadilly Gardens some years ago.

He said: “While I’m not too comfortable about commenting on the council’s move because I don’t know enough about it, we moved our kitchen out of Piccadilly Gardens because we felt it really wasn’t suitable and we faced a lot of issues.

“We switched to Cathedral Gardens and people travelled there for our service, and we then went indoors in Oldham Street.”

The relocation has proved an obvious success for the twice weekly facility, serving hot meals for up to 120 people in conjunction with Oldham Street based rough sleepers’ charity Coffee4Craig at their Centrepoint hub.

It recently won the Queen’s Award for Voluntary Service.