Corrie spoilers: the big dramas on Coronation Street next week 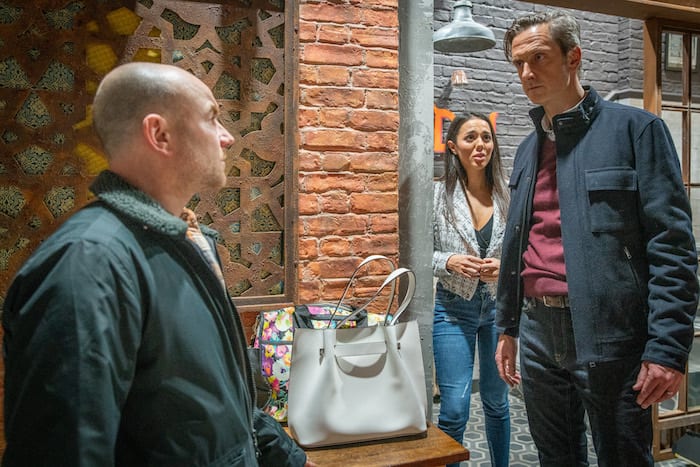 The New Year brings plenty of new dramas to the residents of Manchester’s most famous address, Coronation Street.

Expect angry confrontations, big accusations, and visits from the police after an explosive Christmas on the cobbles.

Here’s your episode-by-episode guide to what’s coming up in the week ahead.

Has Gina found the answer?

With Sally’s family and friends all still desperate to get her out of prison, the web may finally be closing in on Duncan.  In Monday’s episodes, Gina and Kirk head off to Duncan’s address while he’s at Imran’s office.  But Tim spots Duncan at the solicitors and insists he’s going to follow him home – where Gina is breaking in to his flat.

When Duncan returns home Gina hides under the bed, while Tim starts hammering on the door allowing her to escape through a window.  Duncan threatens to call the police on Tim, and as he leaves, Gina following him up the road to a phone box.  She slips in after him to press redial – but just what will she find?

Liz McDonald will this week find out who REALLY mowed her down on the cobbles.  She returns from hospital and angrily confronts Johnny Connor saying that she’ll make him pay for his actions.  But Jenny calls on Liz and begs her to drop the charges against Johnny. The penny drops with Liz that Jenny was in fact driving the car, not Johnny.

Liz is furious and disgusted with both Johnny and Jenny – leaving Johnny worried sick that she’ll go to the police.

A newcomer and new love?

There’s a new arrival on Coronation Street this week, and he swiftly makes an impression. Paul, played by actor Peter Ash, is the brother of Gemma Winter.  Freed from prison (where soap fans will remember he shared a cell with David Platt), he heads to Weatherfield.

And it appears sparks will fly for Paul with vicar Billy Mayhew.  In Wednesday’s episode he flirts outrageously with Billy in the cafe.

Meanwhile, back in prison, poor old Sally is really suffering.  After Abi’s release, Sally’s new cell mate is Marcia and she’s dealing drugs.  A prison officer searches their cell for drugs and Marcia beats up Sally, convinced she’s dobbed her in.

Tim later receives a call from the prison to says she’s been beaten up, and when he speaks to her himself it’s clear she’s at the end of her tether.

Audrey is convinced that Claudia is to blame for the missing £80k from her bank.  Despite Nick trying to talk her out of it, Audrey calls the police and reports Claudia.  On Friday she’s taken away for questioning, but Ken is adamant of her innocence.

Back in the Rovers, Ken tears a strip off Audrey for her treatment of Claudia.

Sophie and Tim lure Duncan’s daughter, Olivia, to Speed Daal to get information from her. Olivia angrily calls her Dad. Duncan arrives in Speed Daal to be confronted by Tim, he steers Olivia out of the restaurant but it’s clear Tim has hit a nerve.

As Duncan speeds away, Tim sets off to Duncan’s flat, wanting to beat a confession out of him. Tim confronts Duncan, but he does a runner and Tim catches up with him and lunges at him. Duncan steps back into the road and is hit by a car.