Corrie spoilers: Sally’s trial begins, Tim gets arrested and Brian in trouble in week ahead 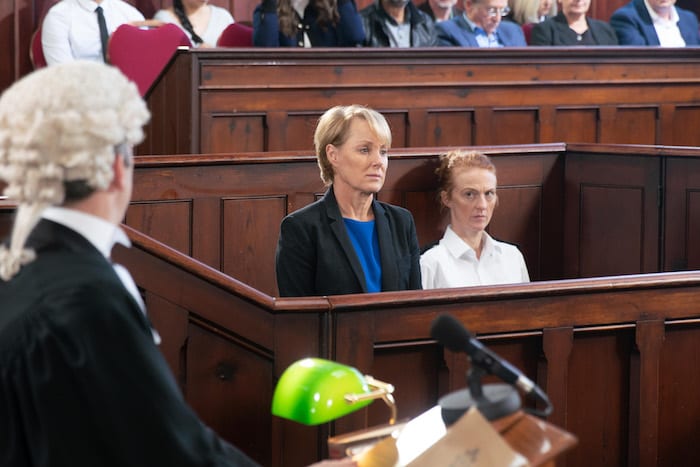 There’s more drama ahead on the cobbles of Coronation Street in the week ahead with tough times for the residents of Manchester’s most famous TV street.

Sally Metcalfe’s trial begins as she gets a new cellmate and discovers that CCTV is the key to her innocence. Meanwhile, her husband Tim gets arrested for suspected drink driving after rushing to help Sally’s sister Gina and teacher Brian gets into hot water at work.

Here’s your episode-by-episode guide for the week ahead.

Ali spirals out of control

Resorting to extreme measures, Ali forces Moira into letting him into the surgery to get some anti-depressants. Looking to drown his sorrows, Ali heads to the Bistro where he gets tipsy and flirts with Bethany. Tensions escalate quickly as a shocked Robert and Michelle arrive back to find Ali and Ryan at each other’s throats. A drunken and angry Ali picks a fight with two bikers outside the tattoo shop and they beat him up in the alleyway. Ryan rescues Ali and scares the bikers off – an upset Michelle is horrified at his injuries.

Tim visits Sally in prison but can’t bring himself to tell her they can’t find a character witness from the council to testify, leading a hopeful Sally to tell her cellmate that she’ll soon be out. Gina goes for another date with a man she met online – after realising he only wanted to meet her for sex, she knees him in the groin and runs off, calling Tim for help. A concerned Tim immediately seeks to help Gina, telling a police officer that he flags down. The officer smells alcohol on Tim’s breath and arrests him.

Sally’s trial begins as Duncan takes the stand and paints himself as the innocent victim who fell in love with Sally – who then convinced him into defrauding the council. Paula tries to help Sally remember what she did on her birthday as Duncan is saying that they spent the night together in a hotel. Kevin recalls that Sally spent her birthday visiting Jack in hospital. Paul and Sophie try to get their hands on the CCTV footage of the hospital, but don’t have much luck. Desperate to get Sally an alibi, Sophie hatches a plan for Sally to pretend to be ill to adjourn the case – giving them more time to get the CCTV footage to help support her case.

Gemma gets jealous and Spike gets arrested

Emma and Chesney go for a run together, which causes Gemma to feel jealous that they’re spending time together. A break-in at the pizza shop leads Spike to be arrested – an already jealous Gemma accuses Chesney of dobbing him in with the police, but Chesney denies being involved. Chesney finds out that it was Spike who robbed the shop, while Spike tells Gemma it was the shop owner who told the police it was him – not Chesney. Spike urges Gemma to tell Chesney how she feels.

Sally gets sick from a new cellmate

A surprised Sally discovers that her new cellmate is Abi. She tells Abi about Sophie’s plan to get her case adjourned but is too scared to make herself sick, so Abi comes up with a plan to help her. Everyone arrives back at the court to find that Sally is in the hospital, meanwhile Sophie confides in a horrified Paula that she told her mum to pretend to be sick.

Brian is under a lot of stress at work as things don’t go according to plan with the play, with Fiz and Tyrone also complaining to him that Hope has been excluded for biting a teacher. Brian discovers that Phil’s exclusion of Hope is part of his master plan to become the school’s headmaster. Brian tells Phil that Fiz and Tyrone will go to the press if he doesn’t reverse his decision, but things don’t go according to plan as Phil says he’s sending hope to a pupil referral unit to be assessed.