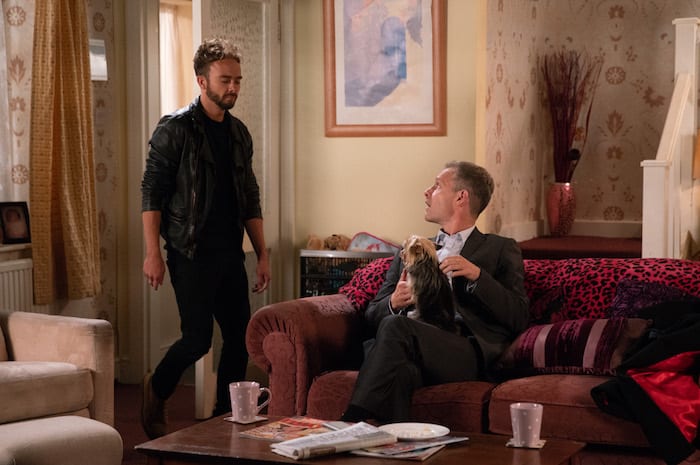 The aftershocks from one of Corrie‘s most dramatic ever weeks will continue to ripple into October for the residents of Manchester’s most famous TV street.

The police investigations continue following the dramatic car crash involving the Connors, and there’s the big return of a soap stalwart.

Here’s what to expect in the week ahead.

Nick Tilsley (Ben Price) returns to Coronation Street – although not everyone is happy to see him – not least his old enemy Peter Barlow (Chris Gascoyne). However his mum Gail (Helen Worth) is surprised but delighted that Nick is back but his brother David (Jack P Shepherd) is angry saying that Nick was not around when he needed him.

Gail berates Nick for neglecting his family and Nick promises to come to No. 8 as soon as he has spoken to Leanne (Jane Danson).

Ali lies to the police

Dr Ali is interrogated by the police about being at the death of Cormac and the crash involving Ronan. Ali answers their questions, but when they quiz Ali about the firearm found in Ronan’s car Ali denies all knowledge.

Liz is in leopard print

Corrie icon Liz McDonald (Beverley Callard) puts on a brave face after being betrayed by those closest to her, and dresses head to toe in leopard print to head to the Rovers Return. Johnny (Richard Hawley) casts a nervous glance at Carla (Alison King).

Robert (Tristan Gemmill) is suspicious of Ali’s behaviour. The police question Michelle (Kym Marsh) about the accident and she is shocked when they tell her Ronan had a gun in his car.

She later confronts Ali, but when she returns home she finds he has packed his bags. Will he leave Weatherfield?

Sinead gets suspended from work

Poor Sinead (Katie McGlynn) gets caught in the crossfire at the factory this week, fresh from her secret heartache over her health problems.

Peter reaches the end of his tether with Vicky goading Sinead and bans the use of all mobile phones in the factory. When Sinead answers her phone because the hospital are ringing about collecting her biopsy results Vicky reports her to Peter and tries to grab her phone. A fight ensues and Peter suspends both women for a week. Meanwhile Daniel (Rob Mallard) confides in Ken (William Roache) that he’s been offered a place on a Masters course but feels the time is not right with the pregnancy.

But Sinead tells Daniel he must accept his place on the Masters course.

An upbeat Daniel tells Ken he is enrolling on his Masters course with Sinead’s blessing.

Meanwhile Sinead attends her hospital appointment to be told she has cervical cancer and should consider a termination. Ken bumps into her and finds her in tears and she tells him about her diagnosis.

Is Abi in trouble?

The police question Kevin (Mike Le Vell) about Michelle’s car, explaining that it was involved in a fatal crash.