Stephen Woodruff and Jacqueline Butler from Whitefield have been handpicked for one of eight slots in a new Kellogg’s advertising campaign after proving their family are Corn Flakes’ biggest fans.

Earlier this year Kellogg’s took to social media to ask people how they eat their perfect bowl of Corn Flakes, in the hunt for wacky, versatile recipes and cereal super fans.

Stephen and Jacqueline and their kids, Phoebe 23, Phillippa, 21, and Madeleine, 14,  were whittled down from hundreds of applicants in an intensive interview process and selected for their love of the breakfast cereal.

Last month, a film crew descended on the their home and captured the family having their usual breakfast arguing over the best ways to eat their favourite cereal.

Jacqueline, who works for Royal Mail and has been with builder Stephen for 28 years, said:  “We are a really close family and we have a good laugh over the breakfast table so I hope that comes across in the advert.

“We were all disagreeing about how you should have your Corn Flakes. We are a Corn Flakes mad house.”

Jacqueline, who favours her Corn Flakes crunchy, said: “Being involved in the advert was fab – none of us had done anything like it before, so it all felt very glamorous.

“We all got to have our make-up done and it was very surreal having twenty-odd people in our kitchen. We kept having to reshoot, we went through so many boxes of Corn Flakes. 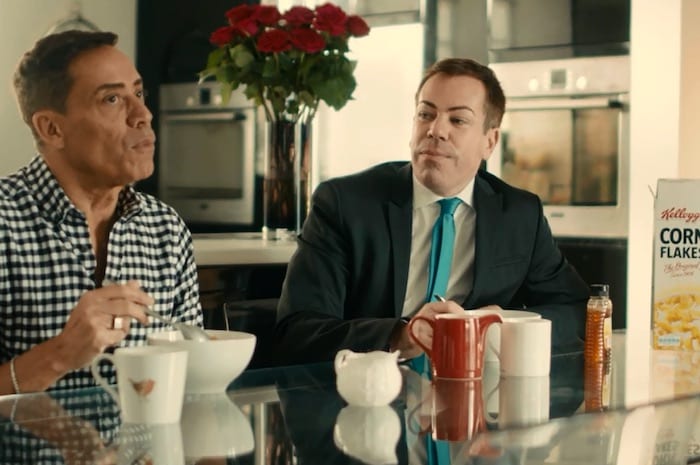 They’re not the only locals to be featured in the campaign. Chris Hall and Mark Hearfield from Bury were also chosen for one of the adverts.

Sales director Chris, 42, who favours his Corn Flakes with hot milk and honey, said: “I grew up eating Corn flakes, everyone in the family ate them it was big part of our breakfast.

“When we heard about the opportunity to be in the advert, we were both really excited. We wanted to be part of the conversation and thought it would be really fun to do a film shoot in our home.”

Last month, a film crew visited the pair’s home and took over their kitchen to shoot the ad – even their dog made a debut munching down a bowl of room temperature Corn Flakes.

Hairdresser Mark, 59, who will also only have his Corn Flakes at room temperature, said: “It was exciting for everyone involved, even our dog loved it. On the shoot day she kept muscling in on my Corn Flakes looking for five minutes of fame!

“We can’t wait to see it on the television, Chris can’t sleep he’s that excited. It was so much fun to be involved and we love the pictures that were shot for the campaign. At the end of the day, it’s not every day you get to be in a Kellogg’s advert.”

The ad campaign featuring a cast of eight real families and individuals, all genuine fans, talking about their perfect bowl of Corn Flakes will debut on prime time TV on January 6th.

The cereal is produced at the Trafford Park factory in Manchester, which is also the largest Corn Flake factory in the world – the site produces 34 million kg of Corn Flakes per year.