“The words lifted people when they most needed it. It was the voice of people coming back to them. It was an amazing thing. I’ve never seen anything like it, actually, standing behind Tony Walsh that night. But it was that moment where the soul of the place was reconnected to the people.”

That’s how Mayor of Greater Manchester Andy Burnham described the moment a poem brought the city together in the aftermath of the Arena terror attack. The moment Tony Walsh recited This is the Place in Albert Square.

Mr Burnham was speaking at Be More Manchester, a celebration of Greater Manchester’s creativity and thriving creative industries, curated and hosted by Creative England.

He went on to reveal the results of the Nesta Creative Nation Report which confirms that  Manchester is the second biggest centre for the creative industries outside Greater London.

Manchester has the most creative businesses outside Greater London, contributing £1.46bn to the local economy. 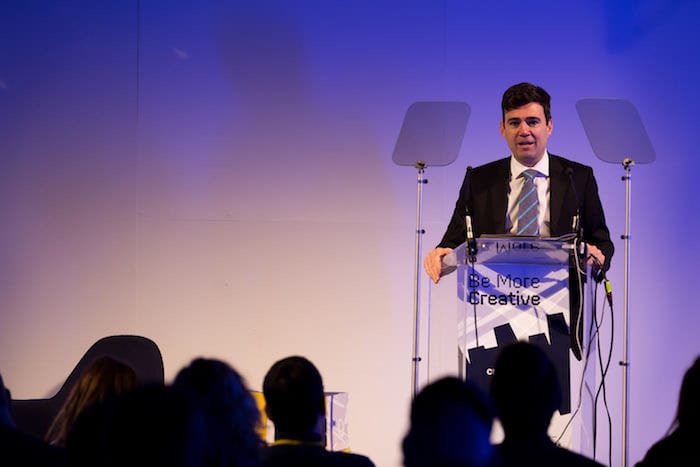 The largest creative sector in the city is IT, software and computer services, with 16,785 employees and 4,523 businesses in total.

“I’m not just talking about creative art. I’m also talking about, if you like, the Ken Robinson theory. That creativity is something that should be applied to all challenges, and teach people to think openly and creatively.

“And I think that’s what the modern world is asking of us now – certainly asking of our young people.

“But what’s happening is the education system is going in exactly the opposite direction. It’s becoming backward looking. All about tests and facts and learning to spout them back at the right time.

“I think we need creativity in our curriculum if we’re to rise to the challenge of the modern economy. That’s what Manchester wants. It’s why we’ve got devolution, so we can let our voice come through and shape those national debates, and we are saying we want more ability to help develop the young people of Greater Manchester, to give them those creative skills that they’re going to need whatever job they go on to do.

“We have a belief here in the power of culture, the power of creativity, to give individuals hope, but also to regenerate communities.

“As a Greater Manchester Combined Authority we’ve just committed to £7m investment in our cultural organisations over the next two years, a small increase. I think you’ll find it hard to see any other part of the country acting in that way at the moment, because we see that bigger picture.  I don’t have to persuade our council leaders to do that.”

Despite admitting to going somewhat off script, his words on creativity and art hit a note with the audience.

“To attain more depends on creativity and the space to be creative. Creativity is the engine room of imagination.

“The chief executive of the Arts Council asked me, what can art do? And this was my answer. ‘The great religions were promulgated through society by art.’

“Christianity would be invisible without the Bible, likewise Islam and the Quran. Both are promoted through story, performance, song, literature, an app, works of art. Art is a time traveller. Art is an omnipresent teller of stories. It is more effective than CNN, BBC and Sky News put together.

“Art is in all of the poems read at all of the funerals, and weddings that have happened somewhere in the world, every day of every year of your life, from every class race and gender and sexuality of human being. The freedom to write is the sign of a free society.

“Art is the greatest symbol, the greatest expression of freedom. No wonder writers are a threat to repressive regimes. It’s because of the greatness and the importance of books.

“There are more words and images passing between more people now than since the beginning of time.

“We are at the beginning of understanding the greatness of this opportunity through the internet, yet art bridges the gap between the spiritual world and the physical one at times of great need, trauma, loss, celebration, reunion, hope, introduction, we need the bridge.

More details on the report can be found on the Nesta website and via the Creative Nation interactive map.