It's not just about what you do on the pitch that matters... 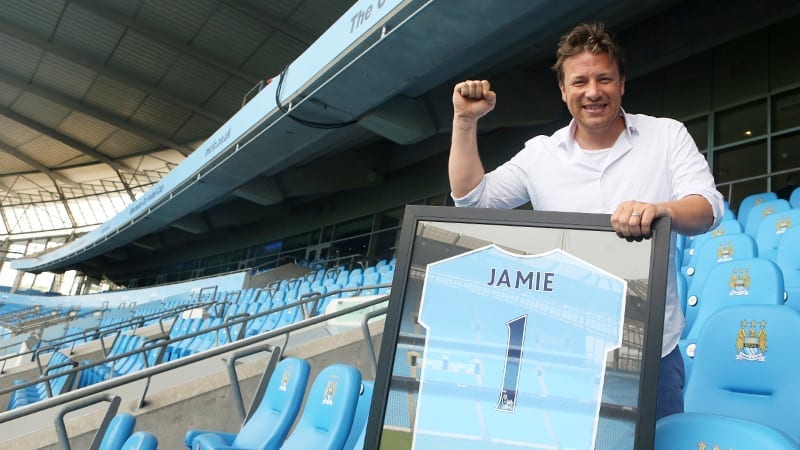 If you want to see how far food and drink has come in our fair city, you only have to look at our two major football clubs.

“it’s not just about what you do on the pitch that matters.”

In the week that Manchester City won their second league title in two years and Manchester Utd started the rebuilding process for the next chapter in their illustrious history, both clubs now understand that it’s not just about what you do on the pitch that matters.

Capturing the fan spend is an important means of growth – alongside the TV revenue and, you know, winning stuff.

Tickets and merchandise is a staple, but the way clubs are feeding fans has undergone a dramatic change in recent years.

It’s not just enough to have ‘corporate hospitality’. The food has to be up there with the best restaurants.

The mockney TV chef and part-time food crusader was brought in to beef up the match day hospitality catering offer at the start of this campaign, to make sure the scran was up to scratch.

That followed on from the 2010/11 signing of Marco Pierre White, recruited to knock out bespoke burgers on City Square, the club’s on-site ‘fan zone’.

On the flip side, Admiral Taverns has had The Kippax pub up for sale for a while now, as the good old pre-match boozer struggles to match the appeal of the club’s own offerings; and popular pre-match boozer The Trafford has been put up for sale despite being a stone’s throw from Old Trafford. About the same distance, in fact, as Gary Neville’s under construction Hotel Football.

Neville’s new scheme will include a branch of Café Football, which has a section of the menu called ‘terrace food’, including a beef and mushroom pie at £14.95 and a £12.95 lamb kebab.

Football fodder has gone so far upscale, Jay Rayner even reviewed Café Football in The Observer last season – and thoroughly enjoyed it.

Clubs have understood that while a game lasts 90 minutes, they shouldn’t see that as the limit of their relationship with fans on match days. Get them in before the game, soaking up the atmosphere and keep them there after for an hour or two. It’s a model that works really well on the continent – and food and drink is at the heart of that.

Matching quality with affordability will always be the challenge. The modern football fan has demands, and is used to paying a premium – but the old school mentality always niggles away if there’s an inkling you’re being openly ripped off.

I’ve been lucky enough to have experienced the full-scale corporate food and drink experience at both City and Utd. The investment and the quality seems to increase at both clubs year on year, with a competitive intensity that you’d be forgiven for thinking only comes out on the pitch, on derby day.

The last time I went to City, I was asked if I wanted a chicken pie at half time. I’d already had three courses before watching the game, but accepted anyway (I’m Northern, you don’t turn down free food).

What I was served when I returned to the table in my box at half time was a plate full of skill and artistry. Involving a modern take on the humble chicken pie. With a glass of Prosecco to help wash it down.

So whether you’re super-high-end or happier with a burger outside the ground, both options are far more focused on quality than they’ve ever been before.

Clubs always have to make sure they keep that connection with the fan, of course. In a game obsessed with money, where cash sloshes around at a level regularly out of sync with the national economy, the skill is to understand how much is too much.

But as ticket prices go up and the price of a pint on the concourse creeps up too, fans continue to eat and drink it all in.

And as City are finding out; winning stuff doesn’t hurt either.