The Charlatans perform their most intimate gig ever – in an office in the Northern Quarter! 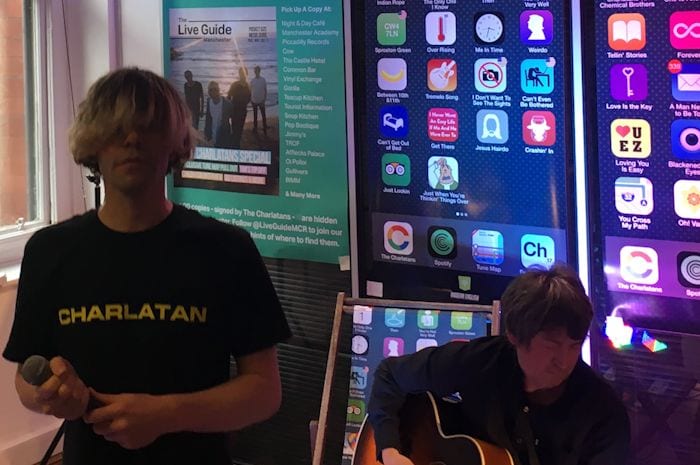 It was light outside. The office space was stripped of the usual desks, computers and workers counting down the hours to the weekend.

They were replaced by a few die-hard fans, some delicious paella and loads of beers. And The Charlatans.

This was no ordinary gig as Tim Burgess himself noted a couple of songs in.

The floppy-haired frontman remarked on the oddity of an intimate gig in an office. Usually smaller shows are dark, cramped and full of mood lighting. This was airy and bright. But it worked.

Burgess and Mark Collins were here to promote the launch of their new interactive app. Earlier in the year, the band created a set of app icons for each of their singles. Northern Quarter-based tech company Modern English then approached the band to bring this to life.

The result was the Tune Map, an app that gives fans the chance to dig around in the band’s archive including never-before-seen footage of them performing Indian Rope in San Francisco in 1990.

Access is granted to specially curated Spotify playlists as well as new footage of the band talking through their classic tracks.

It’s a real treat for fans, as was a Friday afternoon spent in the band’s company at Modern English’s Hilton Street HQ.

It was smiles all round as Burgess and Collins emerged from the boardroom – probably adding to the ‘weirdness’ in Burgess’ mind – and took their seats in front of an excited audience.

The office was adorned with images of the app icons for the band’s singles as well as paraphernalia from Modern English’s previous work in the music industry, most notably with the Foo Fighters and Queens of the Stone Age.

The duo proceeded to entertain with acoustic versions of some of their hits, playing a short show consisting of around five songs.

They encouraged audience participation with a singalong through The Only One I Know and even fulfilled beery requests taken from the crowd.

But as quick as they were on, they were back to the safe confines of the boardroom.

The audience tried to tempt them back on with shouts of ‘one more tune’, but this was just a quick, personal visit to a small few of the population of Manchester.

Stepping back out into a crisp clear Friday afternoon, it did indeed feel weird but also very typical of the creativity and collaboration that exists in Manchester. A band, an independent tech agency – it felt pretty normal. And it worked.