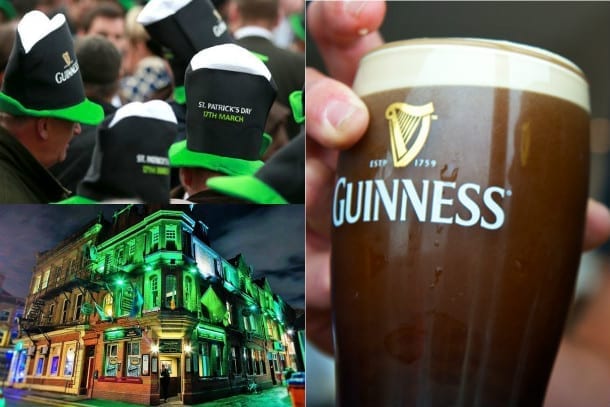 Manchester will be red and green on Thursday. Not only is it St Patrick’s Day but there’s the small matter of a football match taking place between two teams with huge Irish support.
Share
Tweet
Share
Chat

Apparently, 35% of us Mancunians have Irish ancestors so no excuse needed to dust off the leprechaun hat and fake ginger beard, wear something green, watch a couple of episodes of Father Ted, then go and grab a pint of Guinness, Murphy’s or Beamish (delete as appropriate) and maybe watch the footy. But St Paddy’s Day doesn’t end at midnight on Thursday. Oh no, because at some venues they are celebrating all week! Here’s a few to whet the appetite.

There’s a St. Patrick’s Weekend Festival at Mulligans off Deansgate where they claim to serve the best pint of Guinness in Manchester.  There’s a full programme of events starting on Thursday March 17 including live music and a Q&A session with United legends Norman Whiteside & Gary Pallister. They’ll be showing the Cheltenham Racing Festival, the RBS Six Nations, and the Barclays Premiership games. Guinness will be served at £3 a pint and Magners pint bottles at £3.50. No need to worry that you won’t get in. There’ll be a 500 capacity heated marquee erected to the side of the pub.

Whiskey in the Jar at Waxy O Connor’s

Do St Patrick’s Day the Waxy O Connor’s way at The Printworks with a night of Irish music acts to get you in the party spirit. The line up on March 17th includes the return of Quare Craic, a joint performance from Phil Rogerson and Mark Lewis, and folk trio, The Velvet Tinkers. On Friday 18th, solo artist, Daniel Ross will perform from 8pm. And in case you missed them, Phil Rogerson and Mark Lewis will be returning to headline from 10 ‘til midnight, as well treating fans to a third performance on Sunday 20th March, from 6pm ‘til 8pm. Waxy’s is one of the few places in Manchester where you can enjoy The Irishman single malt – one of only a handful of Irish triple-distilled single malts on the market and on Friday 18th there’s a chance to try it at a whiskey tasting evening. Learn about the history of the independent Irish, premium whiskey brand, while sampling a Teeling small batch, single grain, single malt as well as a special Teeling cocktail.

Win a trip to Ireland at Walkabout

Walkabout is celebrating the luck of the Irish with exciting food and drink offers and live entertainment. The Aussie bar is open from 11am till 2am on the 17th and will treat punters to a live performance from the acoustic duo, Cherry Valentine. And for devoted St Patrick’s Day partiers, there will be face painting available from 3pm to 8pm. If Manchester’s Irish offerings just aren’t enough, Walkabout is also offering anyone who purchases Jameson & Ginger Ale and Jameson Barrel Backs throughout March the chance of winning a trip to Ireland for four!

Paint the town green at Bierkeller’s jam-packed week of St. Patrick’s celebrations – a full week of fantastically Irish food and drink offers and cheeky Irish charm. From Monday 14th to Sunday 20th March, you can get a taste of Irish culture throughout the multiple bars in the venue, which will be dressed from head to toe in glorious green. Treat yourself to a host of traditional St Paddy’s beverages. Enjoy a stein of Guinness for just £3.95 or a deliciously creamy Baileys for £3.50. Whiskey fans can indulge with Jameson’s Irish Whiskey for £3.40 or Bushmills Original for £3.40. As well as the classics, there will be special Irish cocktails for just £6.00. Try Irish Eyes – a mix of whiskey, Crème de Menthe and milk. Or for hardcore St Paddy’s partyers, the Irish Mexican – a mix of tequila, Blue Bols, orange juice and pineapple juice. Tasty food offers will be available throughout the venue, including a traditional Irish stew for just £6.95, or the Beef and Guinness Pie with colcannon mash and caramelised onion gravy for just £7.50. There will be free games of pool available in Shooters Sports Bar from Monday to Friday as well as 25% off Bushmills and Guinness, and two for one cocktails in the Around The World Bar.

They’re keeping it simple at Dive on St Paddy’s Day. Pints of Guinness for £2.50, 55% off food and they’re showing the match. That pretty much covers all bases.

If it’s good Irish style food you’re after, Rosylee have put together a specials board. Leek and Potato Soup with cheese and bacon, Irish Stew with soda bread and Baileys and Cream Cheesecake with Guinness jelly. What’s more the bar/restaurant is boasting their Cocktail Club from 5-7pm with 2 for £10 cocktails* featuring a special Irish whiskey cocktail.