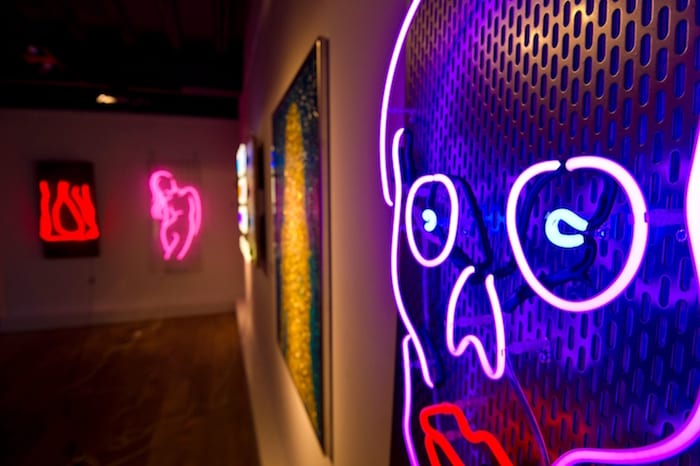 Two of the north west’s most innovative multimedia contemporary artists are delivering a feast for the senses in an new electrifying new exhibition at ARTZU gallery.

LIGHT TOUCH combines Tony Spink’s vibrant neon creations with Stephen Farley’s unique resin paintings in an exhibition that challenges both your visual and your tactile senses.

The neon signs are hand made by Bolton-based Tony who has been running his business Neon Creations for over 12 years, mastering the techniques of working with neon.

He has produced bespoke pieces for major brands as well as high profile musicians and premiership footballers.

Fifteen of his dazzling artworks are on display alongside acrylic and resin-based art by Stephen Farley at the exhibition which runs for another week. 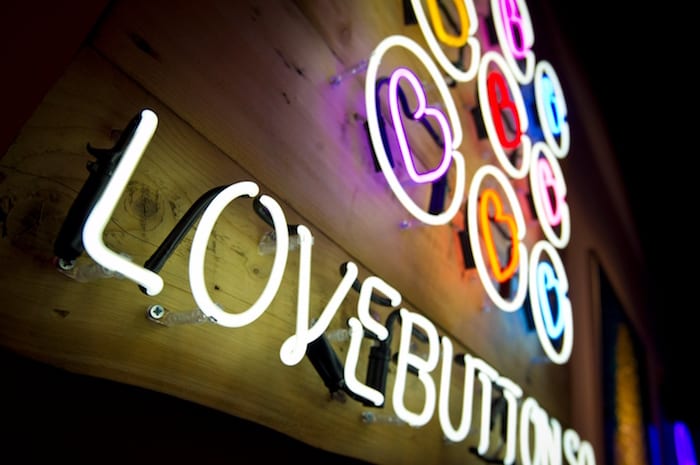 “It’s been 100 years since neon pieces have been made and I’m still fascinated by how something is still made in the same way,” says Tony.

“I believe it’s always up to the people making it to keep it interesting and keep it moving forward and push the boundaries. What inspires me is my love of neon. “

What attracted him to neon in the first place is the fact that neon makes people stop and stare. Although Tony says a lot of his pieces “just look nice” without having a hidden meaning, he admits one of his creations from the exhibition could have a deeper message.

“I saw this really nice wood and I thought I’ll make a cross out of it, it’ll look really cool. Then I wanted to make it very bright and bold. I guess you can perceive that as a symbol of the imminence of death and how one’s not ready yet.”

Birmingham-based resin artist Stephen Farley is known for his unforgettable and refreshing artworks, stimulating both the eye and the imagination. A local firm of solicitors commissioned his large scale Reef wall sculpture for their prestigious Manchester office.

Stephen says he knew the idea of showcasing his work in a room full of neon would be a success, as all his pieces are reactive to light. 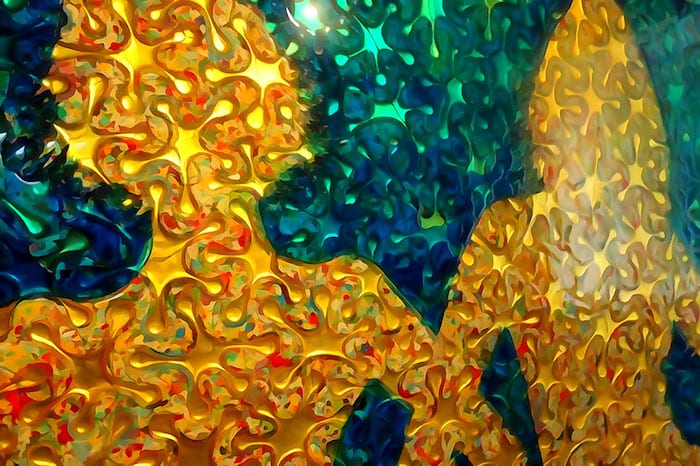 “I was immediately receptive even without seeing Tony’s work at that point because I instinctively felt there might be a natural connection.”

An important aspect of his art, Stephen says, is the tactile element. He says that at some of his earlier exhibitions, people would go on and touch the paintings without asking for permission. He believes touching as well as looking is part of the artistic experience.

Working with special materials such as resin and precious leaves can be very tricky as they are incredibly unpredictable.

“Marrying the two is a painstaking but redeeming process that I won’t be forsaking in favour of any accelerated alternatives.”

The final pieces show the way he perceives the world around him, something which has been influenced by a traumatic life experience which affected his sight.

“It’s almost like you’d need to scrap everything to get to the real image,” he says. “The incident challenged me to evaluate visual perception in a whole alternative way. A TV appearance was equally influential on my creative process. Some of my art was featured on Robot Wars, and received special mention for its unique graphic appropriation.

“However, my true departure point for becoming an artist was the foundation course I embarked on at Bournville College of Art. Before I completed the academic courses, I learned that you shouldn’t sell your homework before your tutor has marked it.”

He is drawn to works where it’s not immediately obvious how the artist has formulated the end result and also admits he is inspired by Depeche Mode.

Stephen’s paintings and Tony’s neon creations complement each other on the walls of the gallery.

Both artists agree that sometimes letting go of their art pieces can prove to be quite challenging.

“You get very attached to everything that you make by hand,” says Tony. “I always see them as my signs.”

“It looks likely that we’ll both end up with each other’s work in our homes,” says Stephen,  “so there couldn’t be a finer testimonial to our collaboration than that.”

LIGHT TOUCH is at ARTZU Gallery until 23rd November 2017.