MediaCityUK: Canary Wharf of the North?

A new big money deal between Peel Holdings and Legal and General Capital... 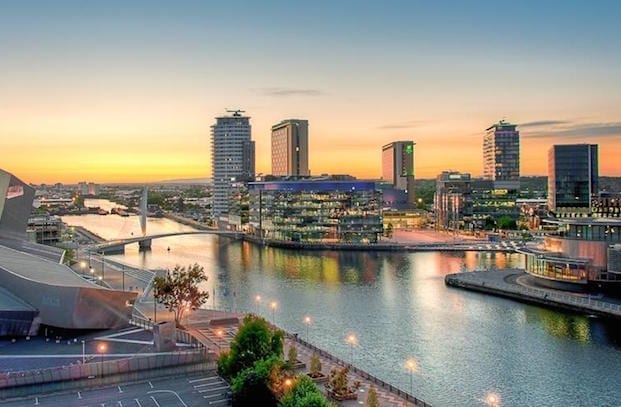 A new big money deal between Peel Holdings and Legal and General Capital has led some to call it a major step in MediaCityUK becoming the media ‘Canary Wharf of the North’, but should it be defining its own labels?

‘Greater Manchester
is at the heart of the new
industrial revolution…’

While Manchester has always been keen to emphasise its obviously distinctive differences from London, proudly blazing its own trail and leaving the capital’s overcrowded, inpatient tube-dwellers to their own devices, it still finds it difficult to avoid certain comparisons to the big smoke. As the current fastest growing city in the UK, Manchester has for a long time been growing a reputation as the capital of the North, and rightly or wrongly that means people are always looking to measure it against London’s financial and cultural hubs.

It was announced this week that The Peel Group have sold half of their ownership share of MediaCityUK to Legal and General Capital, in deal worth around £250 million that is being talked about as a significant step towards making MediaCityUK the ‘Canary Wharf of the North’.

The enormous investment agreement will see Peel retain responsibility of the development and management of the site, but there is no doubt that getting Legal and General onboard – who have a market capitalisation of £16.5 billion – represents a major coup. The two companies have pledged their commitment to developing both MediaCity and the wider Salford area – where LGC are already involved in regenerative projects.

Commenting on the deal, Steven Underwood, chief executive of the Peel Group, said: “We are delighted to welcome LGC as Peel’s partner at MediaCityUK and look forward to working together during the next stage of its development.

“Legal & General’s focus on regeneration and long history of investing in UK property makes them an ideal partner.

“We are both committed to MediaCityUK’s continued growth as a major destination for business, residential living, retail and leisure over the coming years.”

As well as media, the site is also home to a number of retail and leisure facilities, hotels and restaurants such as Manchester heavyweight Damson.

“In the Peel Group, whose vision has been instrumental in the development of the North West, we couldn’t have a better partner for the stewardship of MediaCityUK. We know the North West well and are already involved in regenerating Salford.

“Now, with our investment in MediaCityUK, the potential to drive growth and prosperity for the area is immense. Media and internet technologies are the new industrial revolution and Greater Manchester is at the heart of it.”

But why Canary Wharf? Jeremy Clarkson once notoriously rubbished suggestions that MediaCityUK could take on London and its flashy business and media districts, branding it no more than ‘a small suburb with little to offer beyond a Starbucks and a canal with ducks’. On that front, and not for the first time, Jeremy Clarkson increasingly looks like he may of spoken out of turn. MediaCityUK is the largest purpose-built creative, digital and technology community in Europe, and continues to thrive as the national home of BBC sport, the world’s largest soap in ITV’s Coronation Street, as well as a number of the two aforementioned broadcasters flagship programs. There are new tech and creative startups springing up all the time, a state-of-the-art university campus, and the area has an incredible feeling of futuristic youthfulness and potential to it. There is also an astro-turf football pitch now to compliment the Starbucks and its accompanying ducks. Have that Clarkson.

But despite this, there is a case for the Canary Wharf Association perhaps being more of a hindrance to MediaCityUK than a jewel in its crown. The two both sit on water, yes, and decorate themselves with impressive glass structures as far as the eye can see. But their cultures are very different, or at least they should be. Canary Wharf is one of the most bustling business districts on earth, its high rise behemoths swallowing capital 24/7. MediaCityUK is not only meant to bridge the gap with the traditionally London-dominated media industry, but it should also slowly become the centrepiece for creative thinkers. Nowhere else in Europe has such an interconnected hub, that can easily place a brave new startup on the doorstep of some of the world’s biggest broadcasting groups. It is there to embrace Manchester’s history of innovation and invention, and welcome in a new age of digital entrepreneurs, ignoring what others are doing and creating a fresh legacy of its own.

Canary Wharf is in many ways a role model to any new mini-city development, but MediaCity has to be unique. It has to embrace the Salford it shares its name with, and invest heavily in finding the untapped talent just beyond its shiny city walls. If the new deal between Peel and LGC is a further enabler to that quest, then it could be another exciting benchmark in MediaCityUK’s young life. But forget Canary Wharf for a second. There are already 6000 people living and working in MediaCityUK, and much of the 37-acre it is still unoccupied, ripe for growth and investment. MediaCityUK need look nowhere else but at its own unique opportunity.