I’m here to tell you about the rise and rise of The Black Dog chain, and also about some pretty amazing chicken wings.

“…the most anti-date night item on the menu: smoked chicken wings…”

Along with Underdog and Black Dog Ballroom, Dog Bowl is one of several New York inspired joints in the centre of Manchester that are conquering this city of ours.

An authentic, American style diner which is reasonably priced for the students and ‘express’ for the busy, the branch we visited today has been known for its ten pin bowling perhaps more than its U.S inspired food. But as they are just two days into a new menu, and it’s their first birthday, we’re here to tell you about the scran. 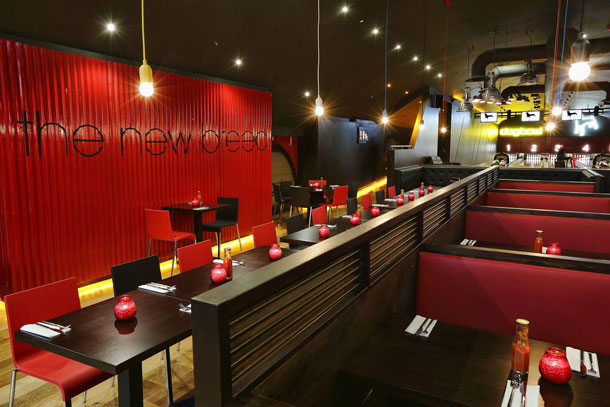 Yes, we did have a go at bowling, and yes, we are pretty excited to learn that you can play a game as late as 2.30am – but you also need to know that if you shake the bone of Dog Bowl’s pulled pork after its forty hour cooking process then it falls away. It’s that tender.

Now I have your attention, I’ll tell you that it is much quicker to list the ingredients not made from scratch than those that are. Chef, Barry Gamble tells us all about the influence of top chefs he has worked with, and how he has translated this into a team of chefs smoking and frying meat like pros.

There’s no desire to be classified into the hip ‘gourmet fast food’ category of late culinary vogue. We’re told that “happy customers” = “a happy chef”. And anyway, had you ever heard of ‘Fried Tortilla Soup’ in the fast food vocab before? Because Dog Bowl serve it. 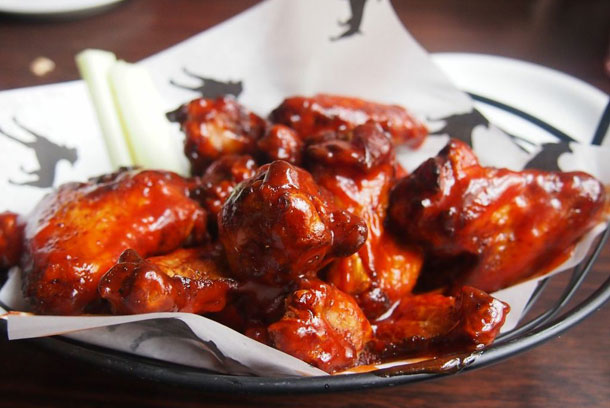 While I opt for fajitas which come on an elaborate amount of dishes, Chris and Tom go straight for the most anti-date night item on the menu: chicken wings that are positively swimming in sticky, disturbingly tasty variations of sauce.

A new addition to the menu, Tom braves the (‘very hot’) Wild Buffalo Sauce, inspired by this year’s fiftieth anniversary of the buffalo wing. Chris opts for the ‘sweet’ bourbon BBQ. Both receive an equal coating of sauce on fingers and beards. And I take that to mean that they liked it a lot.

Sure, this hybrid entertainment venue is a ‘new breed’ of night life, but it’s not all about that sleek five-lane bowling alley. Get in there and try the damn food!