Author Tommy Rhattigan, whose harrowing account of his life as a seven year-old surviving crippling poverty and brutal abuse in the slums of inner city Hulme became a best seller, is well on the way to writing a sequel.

1963: A Slice of Bread and Jam, published earlier this year by Mirror Books, offers a raw and often funny snapshot of life in a large Irish family – Tommy is one of 13 children – ruled by an abusive and alcoholic father and a drunk negligent mother.

But the killer fact that set Tommy’s story aside from other tales of childhood woe was his encounter with Moors Murderers Ian Brady and Myra Hindley while he was begging in a park. He escaped the evil couple through a window of the Gorton home of Hindley’s grandmother where they had taken him on the promise of the slice of jam and bread – hence the book’s title.

In Manchester for the filming of a documentary for Channel 5 about the impact of Brady and Hindley’s 1960s’ killing spree on their child victims’ families and surviving siblings, Tommy told us that his next book would be a continuation of his story up to the age of 14 or 15. He’s hoping to complete the book – another grim chapter in his life, spiked with characteristic humour – by the end of the year.

Despite the privations of his early life, he wrote in the epilogue of the first book that his childhood in Manchester had been the happiest time of his life. 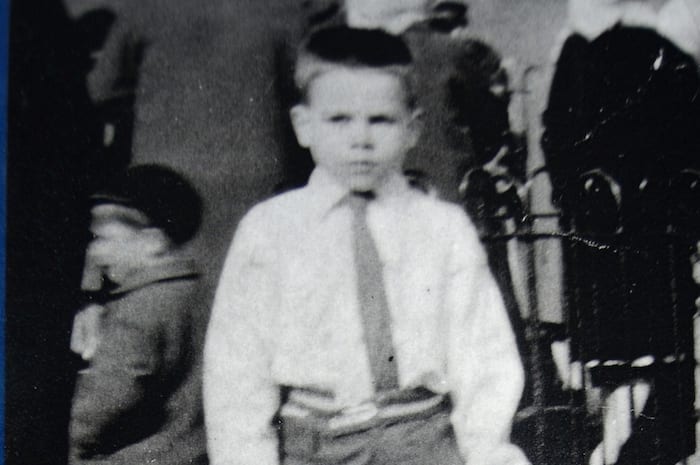 “A lot of people who read the book didn’t understand that,” he said. “They thought it was a crazy attitude to have, given what had happened to me. But what happened next was a lot worse.”

Tommy, a persistent truant, was placed in the care of the local authority and spent time in children’s homes and later in approved schools. “They put me in a care home because I refused to go to school. I wanted the freedom of roaming the streets. It was all I knew.”

Ironically, the boy who had escaped the clutches of two of the most sadistic child killers in recent history, fell foul of paedophiles in the care system. “I was abused for years,” he said. “It was the worst period of my life – absolutely horrendous. They took my soul.

“To be honest, I didn’t really have issues with the Brady and Hindley encounter until buy cheap propecia canada many years later. When you mature into a man – that’s when the events of childhood have their biggest effects.  I suffered with mental health issues because of the guilt you carry. You blame yourself for what has happened to you. It doesn’t just make you a lesser man, but a lesser human being in the sense that it had taken my soul.”

Despite his wife Jill – they’ve been together since 1972 – “always being there for me”,  he had a complete breakdown in the early 1990s. He says he didn’t care about life, and his painting and decorating business, which at one time employed 32 people, ‘disappeared’.

Helped by Jill, who comes from a comfortable middle-class background in Bedfordshire, Tommy turned to writing poetry and songs.

“I went in search of the boy I was and to bring him with me. I started writing as a kind of therapy. I want to tell you who Tommy Rattigan is. Not for you, but for me.

“The success of the first book, which has sold around 50,000 copies, took me by complete surprise. I just didn’t think that was coming and when a director of Trinity Mirror’s publishing group rang me about the story, I thought it was a big joke.”

He’s obviously proud of the book and also of his songs. He wrote one with former 10cc star Graham Gouldman called Good Planets are Hard to Find, but takes most pride in a song called Beating Hearts which was performed at the 2017 Minnesota 9/11 Memorial Concert in the United States by a full orchestra and a 60-strong choir. “I put it on Facebook and they contacted me and asked it they could perform the song. Of course I said yes,” said Tommy.

The father of three now lives with Jill in the south-east, but his vivid childhood memories of Manchester are etched deep. He says: “Nowadays the children [daughters Tamara, 37 and Zara 31 and son Mark, 34] find it hard to believe I lived in such a slum.”

Tommy, incidentally, is the only member of his family to spell Rhattigan with an h.

“All my siblings were called Rattigan, but – it’s typically Irish –  the registrar spelled the name as he heard it”.

1963: A Slice of Bread and Jam is available at all good bookshops and on Amazon.