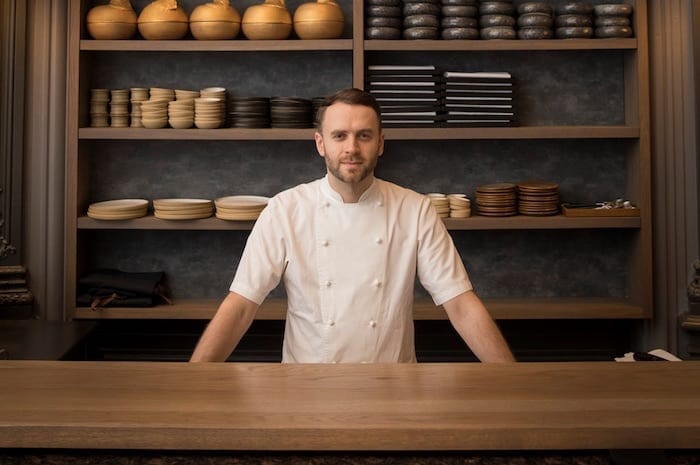 According to the 2018 edition of the Good Food Guide, Adam Reid is the best chef in Greater Manchester by some margin. And the AA Guide praises his ‘white hot culinary creativity’.

His restaurant, Adam Reid at The French – the flagship dining room in Manchester’s iconic Midland Hotel – is the only one of 33 Greater Manchester restaurants in the guide to be listed in the UK’s top 50. He has steered the French to 17th place with an impressive eight out of ten for cooking.

The accolade marks the pinnacle of the talented young Mancunian’s career so far. But it is a career that almost ended only months after it began.

Two weeks after leaving school aged 16, Adam got his first job as an apprentice in the kitchen of the Charles Hallé Restaurant at the Bridgewater Hall. His boss and mentor at the time was the restaurant’s executive chef, Robert Kisby.

According to Kisby, who later became executive chef at Le Mont at the top of the Urbis building while continuing to oversee catering at the Bridgewater Hall, Adam came within a whisper of quitting after only six months in the kitchen. 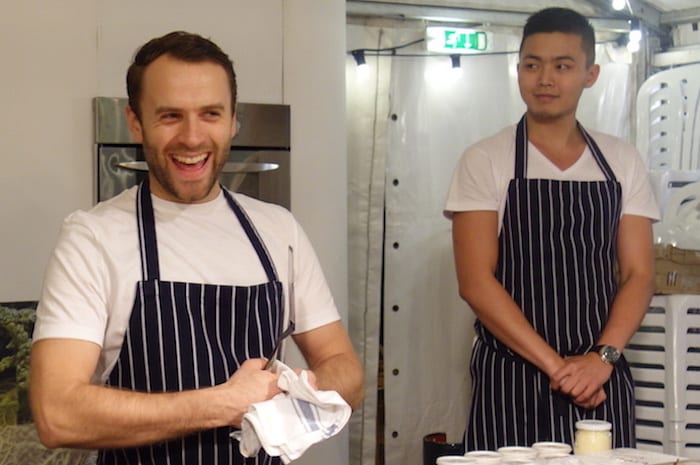 “I saw something in him,” said Kisby, “so I sat him down and told him that he could go places if he buckled down and worked hard. Look at Adam now. I’m proud of what he’s achieved.”

Adam’s take is slightly different but the upshot is essentially the same. “It’s a story I tell people because it’s very relevant to me and my team. Six months after I came into the job from school I was in a nice modern working environment, but like 16-year-olds do, I thought I was pretty good but sometimes found the professional demands tough.

“Rob sat me down and more or less said that if I was going to get anywhere in the industry I needed to pull my finger out. I have a lot of appreciation for what he said to me at the start of my career.”

Adam worked for Kisby at the Bridgewater Hall for the best part of four years before travelling to Germany – ‘part fun, part travel, part work’ – for a year and getting a job in a bierkeller. When he came back he asked Kisby for a job and joined the brigade at Le Mont, an ambitious modern French restaurant, for 14 months.

Kisby – who ironically served his apprenticeship at the Midland – left Le Mont in acrimonious circumstances and moved to Cheshire – first to the Cock ‘o Barton in Malpas and then to Cabbage Hall near Tarporley before leaving the profession, disappointed and disillusioned.

Adam, meanwhile, honed the skills Kisby taught him, working as sous chef at Brockencote Hall in Worcestershire and then at the Michelin-starred Simon Radley at the Chester Grosvenor.

When Simon Rogan, acclaimed chef patron of multi-award winning L’Enclume in Cartmel, was brought in to revive the Midland’s French Restaurant, he recruited Adam as his head chef.

When Rogan stepped aside from the Midland in October last year, Adam, by this time a national figure having served a winning dish on the BBC’s Great British Menu, stepped up. When the French was relaunched at the start of this year it became Adam Reid at the French.

Adam said of the Good Food Guide’s latest listing: “It’s phenomenal because this is essentially a new restaurant. Of course it’s the same room in the same hotel. I have been head chef for four years and a lot of the staff members are the same, but it’s a new business with a new approach and a new system.

“For us to get into the first major guide to be published for 2018 and gain a position higher than last year’s 18th spot is tremendous and speaks volumes about where we are taking the restaurant.”

He draws no particular distinction between the leading guides – Michelin, Good Food Guide and AA – saying only: “Each of them focuses on different things and appeals to different markets. It’s up to the readers to choose their favourite.”

He added: “Robert Kisby loved this restaurant. I owe him a debt of gratitude.”