Behind the scenes at Fletcher Moss Rangers: the unofficial Man Utd academy

Fletcher Moss Rangers have been thrust from the banks of the River Mersey into the limelight following the success of Marcus Rashford at United. Jonny Swindlehurst went to Didsbury to find out the secret of their success 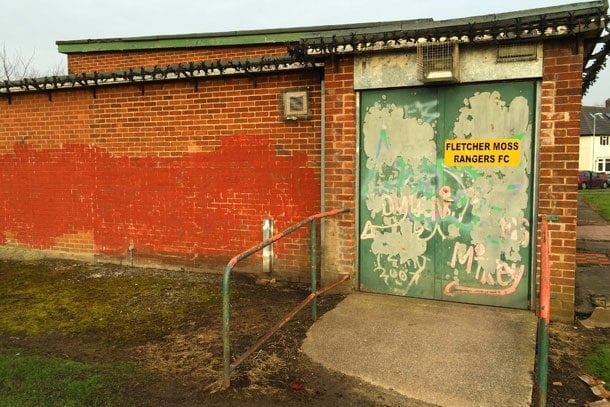 United fans have had little to smile about this season. It’s been dull, stodgy and awful at Old Trafford. There’s no buzz. There’s no passion. It’s ordinary and not what you expect from a United team.

“When he scored the phone was ringing off the table. It was just a phenomenon.”

Sometimes you have to go back to basics to remember what it is you love about the game. It’s not the TV money. It’s not player wages. It’s about passion, togetherness and glory against the odds. It’s the latter that’s provided the story of the season for United – the rapid rise to fame of Marcus Rashford.

Rashford started life at Fletcher Moss Rangers – one of many on a production line to Old Trafford that includes Danny Welbeck, Ravel Morrison, Tyler Blackett, Wes Brown, and current United squad member Cameron Borthwick-Jackson. But it’s Rashford who has thrust this junior club from Didsbury into the national limelight.

I headed down to  Mersey Bank Playing Fields in south Manchester last Saturday morning to catch up with Dave Horrocks, founder and academy development officer. It was a week later than we’d originally scheduled – the pitches had been closed by the council the previous week because of the snow.

The big boys from 5Live were coming down later and Dave’s wife had banned him from talking to the press the previous week. We were smuggled in through the back door.

“The fact that Marcus came into the limelight at the time he did was absolutely perfect timing for us because it’s highlighted where he’s come from and the fact we’ve had that many players come through,” says Dave. “It was the right place at the right time.

“When he scored the phone was ringing off the table. It was just a phenomenon.”

Phenomenon is the right word. How does one small junior club produce so much talent for the Premier League’s most successful club?

“We’ve got no ties with United,” says Dave. “We’ve got a policy from our committee that we’ll not jump into bed with one particular organisation. What we do is have an open door policy. Any club can come down provided they follow the rules. Provided they treat us with the respect that we deserve we’ll help them out.”

The sun is shining, the dew is fresh on the ground, the playing surface looks fantastic as the kids start arriving for the 9.30 fixtures. Parents are happy and involved. The coaches are decked out in Fletcher Moss blue and black and everyone’s geared up for another successful Saturday.

Taking my place as an anonymous bystander it’s clear to see the family nature of the club and the love everyone has for the game. It’s the club of choice for parents of the area, with many travelling from much further to make sure their kids get the best coaching.

Keat from Wythenshawe has been bringing son Jayden down since the start of the season. “When I spoke to Alan (one of the coaches) and found out he was running a team here, it was the right decision to get him down here. He’s really coming on.”

The turnout by parents at all four 9.30 games is strong. They stand behind the respect barrier on one side of the pitch, with the coaches on the other. They help with the running of the individual teams but let the coaches get on with their job.

The club has three main coaches and four or five students from Manchester University and enjoy a “fantastic relationship” with the institution. So much so that two of the students have agreed to stay on for up to three years to continue coaching at the soccer school. In exchange, Dave has agreed to fund half of the costs for their coaching badges.

“They’re brilliant lads. They’ve got my enthusiasm, which I like. I love it when they’re enthusiastic with what they want to do.”

And that’s what it boils down to. Enthusiastic, well trained coaches who have the space to give their full attention to getting the best out of young talent. I witnessed a soccer school focussed on running with the ball, as well as one-on-one goalkeeping coaching. Every kid is given the chance to fulfil their potential.

The club is known throughout the Premier League, but that doesn’t always bring the right attention. One local professional club attempted to negotiate an off the books deal for exclusivity in exchange for use of their official crest on the website. The sell was that Rangers could secure £15 per child for the soccer school rather than the £3 that was charged at the time. Once refused, the club in question threatened to flood the pitches with scouts and pick up all the players anyway.

“I said fine, fantastic. At least the kids will start getting a chance. You’ll see all the kids rather than just one or two”, says Dave confirming the club’s position.

The latest to pick up players is Stoke City. “Some of our players were scouted here and are now training with them. What I’m to believe is that the head of the academy wants to have a chat with us to see if they can support the club in some way.”

At the moment it’s proper grassroots football. There are signs warning against dog fouling, barbed wire surrounds the club house roof, the equipment is stored in a rusting shipping container and the club sign is barely noticeable on a heavily graffitied door.

But whilst the finances are always at the forefront, everything is geared towards preserving success on the pitch. The Under11s triumphed two weeks earlier in the mid-season cup and show no signs of letting up.

Andrew Nape, dad of right winger Kyle comments, “I probably wouldn’t have taken him anywhere else to be honest. The club is just fantastic. I can honestly say I’m proud to be part of this club. That he’s part of this club.”

It’s a feeling that’s clear from everyone involved.