Ambulance: the award-winning TV series that’s ‘a love letter to the NHS and Manchester’ 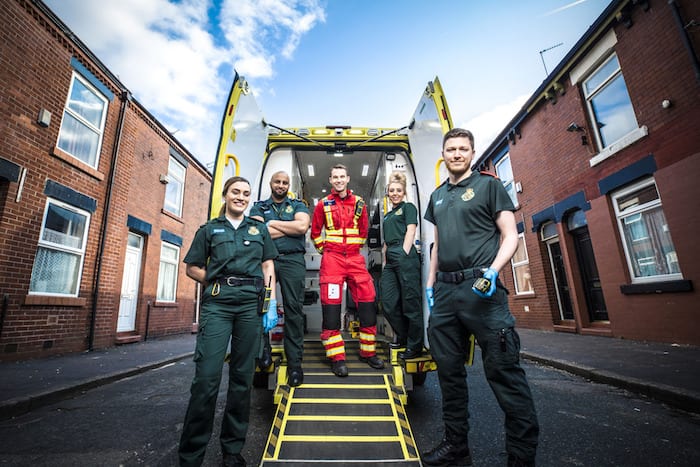 Ambulance is back on our screens and once again following the work of the North West Ambulance Service in Greater Manchester.

“We’ve been filming with North West Ambulance for quite a while now. The first time we were trying to capture what it was like in Greater Manchester during the summer. This time we’re focusing on the difficulties of the winter,” says executive producer Simon Ford.

“We’re trying to tell the story of this great city and the people in it at a time when we all know the NHS is put under extra stress, just the sheer presence of snow and ice and the flu epidemics.”

The first series aired in 2016 and followed London Ambulance Service. Simon recalls visiting the headquarters and seeing the control room in action for the first time.

“It’s effectively where the decisions about who gets help, when and where, are made. I thought that was incredibly powerful and the reality of what we’re having to deal with given the cuts and shortage of resources. I remember thinking ‘that’s an important thing for the public to know about, and it would also make compelling television.’”

“It did worry me when we first started making it, whether people would come to it. Would the fact we’re trying to tell the story for what it really is put people off, would people worry they’re being made to cry? We hopefully get the right balance, and it’s a close representation of what the paramedics actually do,” says Simon.

Perhaps it’s no surprise the programme is so popular and has even picked up a BAFTA for Best Factual Series along the way.

“The thing with Ambulance is that it takes you from moments of high drama and anxiety as to whether someone’s going to be alright, through to the relief that someone is going to be okay, to tears about long-term relationships, and then laughter.”

In the first episode of series five, which was filmed between January and March this year, we saw helicopter emergency crew, Matt and Andy, called to someone who’d been hit by a tram; paramedics Paul and Adam tend to a man who’d collapsed in his bathroom; a woman who’d fallen on a dance floor in Bolton and an elderly gentleman who’s taken a tumble.

Fellow paramedic team, Jade and Jonny, were sent to a lady who’d hit her head, another patient who’d been found on the floor and to Gordon, who’d found his wife Shirley in a distressing state.

Both Jade and Jonny were clearly moved by the sombre reality of the situation and at the end of the episode we discovered Shirley passed away a few days later. The news was accompanied by photographs of Gordon and Shirley on their wedding day 44 years ago.

“It’s an important way of saying to the world ‘we loved each other for all those years’ and it’s a measure of respect,” says Simon. “I think it’s important to have those photographs and updates at the end of the programme. We put a lot of thought and care into them because they really matter, both for the people concerned and for the viewer.”

Simon credits the paramedics, the patients and family members for agreeing to be filmed and sharing their experience.

“I’m hugely grateful to anyone who does agree to do it because without them we couldn’t tell the story of what’s going on. Obviously, not everyone agrees to be on it. We’re entirely dependent on the patients understanding why we’re filming and what we’re trying to achieve, and that we’ll be respectful of them,” says Simon.

“Fortunately, there are a few programmes that have gone out now, so people understand where we’re coming from and we have a very skilled team. We’ll talk to people as it’s happening, we wouldn’t just barge in, and get people’s consent on the day but then go back to them afterwards and explain how we might be using it to make sure people are happy with that.”

But you don’t necessarily have to see the patient.

“In the first episode, there was an incredibly moving story involving one of the call takers, Laura, who takes a call that reflects her own experience [from when she was younger]. You don’t need to know who’s on the other end of the phone,” says Simon.

Logistically, each programme is “about throwing a lot of resources on particular days”.

“We know the Monday morning shift is incredibly difficult because people have sat there over the weekend waiting for the doctor’s surgery to open, they might not have been able to get through A&E and all of a sudden, there’s a huge spike in demand. So, we’ll work out which crews, and who in the control room, we’re going to follow that day, and then basically film as much of it as we possibly can,” explains Simon.

“It’s about telling the story as close to the reality while protecting the privacy and dignity of the people involved. We do it with a lot of care and attention and heart, and I think that’s why the audience reacts so well to it. I also think the profession is more and more respected because millions of people get to see it in such a direct way every week.”

Simon doesn’t want to divulge what we can expect for the rest of the series but does say “every single programme has that enormous range, from the difficulties of being homeless and in the cold and days when the M6 might have had to be closed because of a very bad accident. There’s an enormous variety of amazing stories we we’re able to tell”.

Having worked in different regions, he says every part of Britain has “its own special character” but that it’s been “a great pleasure to make our programmes in Manchester”.

“There’s a very lovely downbeat humour and humanity to people in Manchester which has been seen when tragedy hit the city and the rest of the UK recognised what a great place it is. I’d love to be back with North West Ambulance Service, they’ve been brilliant to work with. I’ve always thought the Ambulance is our love letter to the NHS and it’s also a love letter to Manchester this series.”