Skyline Manchester is a one-off exhibition bringing together newly commissioned photography and existing works that focus on the skyline and architecture of the city. With views from some of its most iconic buildings, this is a unique collection that will show modern Manchester at its most dynamic.

Andrew Brooks captures the views in vivid detail. Each image is built digitally from up to two hundred separate photographs. Through this process, the complexity of the city is shown in all its detail and the light and colour is refined to give them an almost painterly atmosphere.

“I feel incredibly lucky to get to visit these rooftops with such amazing views of Manchester,” says Andrew. “I aim to show how it felt to be up high, watching the city – from a single person rushing below, to huge new buildings rising amongst tower cranes.”

The exhibition, in partnership with Design Manchester, includes imagery commissioned for the citywide DM16 festival of design which will celebrate the part that design plays in making Manchester and other cities great to live in – from architecture to culture and world class media, start-ups and studios in creative tech, shops for a design-conscious generation and the return of craft in everything from beer to print in the new culture of making. 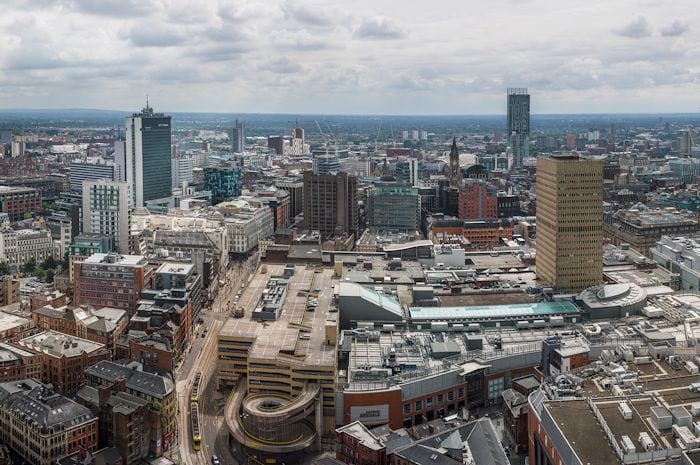 “We were honoured to work with him on DM16’s Design City campaign, working together to reflect how design weaves through the fabric of the city, even when it goes unnoticed.”

Skyline Manchester will be an exclusive one-off event on the 10th floor of Neo, an 11-storey, 52,000 sq ft building currently under development on the corner of Portland Street and Charlotte Street.

“We are delighted to be working with Andrew Brooks to deliver this unique showcase at Neo,” says Peter Crowther of Bruntwood.  “It reflects our commitment to showcasing Manchester artists at neo as well as our passion for the Manchester Skyline which we have been able to play a part in evolving.”

Neo will feature Bruntwood’s most evolved workspaces to date and will house co-working spaces, event spaces, private studios, a communal lounge and kitchen, a roof terrace and a digital art space on the ground floor. The upper floors, including the 10th floor exhibition space, will feature open-plan office layouts with panoramic views across the city.

It will provide innovative tech solutions and support services for all sectors, including the creative, media and digital industries, as well as the more progressive, creatively-minded businesses seeking a flexible and collaborative approach to the way they work, which makes it a perfect fit to collaborate with both Andrew Brooks and Design Manchester.

This will be Neo’s first event, marking its intent to collaborate with the creative industries and businesses with a creative outlook. Neo will have a dedicated on-site community manager to develop the building’s internal social network, running a programme of events that also takes in health and wellbeing, social networking and business support.

Neo is due for completion in early 2017.  Design Manchester’s DM16 launches on 12 October.

Skyline Manchester will take place on Wednesday 5 October 6-8pm.  A limited number of tickets are available to the public and details of how to register will be announced on Wednesday 28 September through the Design Manchester Twitter and Facebook pages.