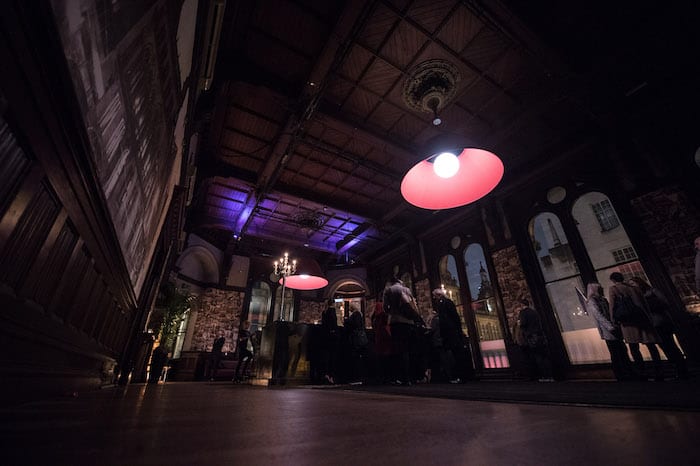 Built in 1871 as The Reform Club, this impressive and beautiful  three-storey site on the corner of King Street and Spring Gardens was originally a gentlemen’s club for Manchester’s Liberal Party elite.

Designed by architect Edward Salomons and opened by then prime minister William Gladstone, many important decisions which influenced history were made here. Its grand Venetian Gothic balcony was the location for Winston Churchill’s election victory speech in 1906.

The building is richly adorned with gothic carvings, winged beasts, coats of arms and references to our industrial city. According to John Ryan, our Green Badge tour guide, over 90% of all the cotton in the world was traded through Manchester – something which seems astonishing to contemplate now.

We went up a fine staircase, at the top of which which Gladstone is immortalised in plaster of Paris, through to the grand dining room, resplendent with its floor to ceiling windows, and that famous balcony.

Living Ventures’ CEO and co-founder Jeremy Roberts told us that this project was very close to the heart of co-founder Tim Bacon, who passed away unexpectedly earlier this year. He had no hesitation in acquiring the site when it became available in 2015, saying “it’s such a cracking dining room, I’ve loved it for a very long time, back since the days of Reform.”

Reform was a venue I knew well from my first foray into the world of restaurants. I was one of the original team to work there in the nineties and it holds some great memories. It was the breeding ground for some great talent, both front and back of house, and there are a lot of us still working in the industry across Manchester. I think we are all curious to see what Living Ventures will do with the site and if they can reach that level of Bernard Carroll’s design in terms of grandeur and decadence befitting of the building, not since matched.

For this we will have to wait as Jeremy is keeping quiet – apart from saying that the new Grand Pacific will be colonial Great Britain meets the Pacific with a nod to Raffles Hotel.

There are currently remnants of the last inhabitants, Room, on display, including those huge lampshades – think Ikea on steroids – but from Jeremy’s wry smile I guess these will be long gone next time we visit.

Work begins this week under the direction of designer Michelle Derbyshire, who also worked on Australasia, sister restaurant to the current Grand Pacific in Spinningfields. This huge new addition will seat over 100 covers, include a large bar area, with private dining available in the old club room at the back.

We were treated to pineapple cocktails served in exotic gold pineapple tumblers. The pineapple has long been recognized as a symbol of hospitality and warm welcome. According to John Ryan, they were so rare in Victorian times that families would hire one for their table on special occasions to impress their guests.

Our gold tumblers were boxed up and given to us as a memento of our visit. Grand Pacific is scheduled to open in March next year. What to expect? Who knows? They are giving very little away at the moment – apart from pineapples.