6 Reasons Why We Love The Cornerhouse

The Cornerhouse has been the heartbeat of Manchester's cultural life for nearly 30 years... 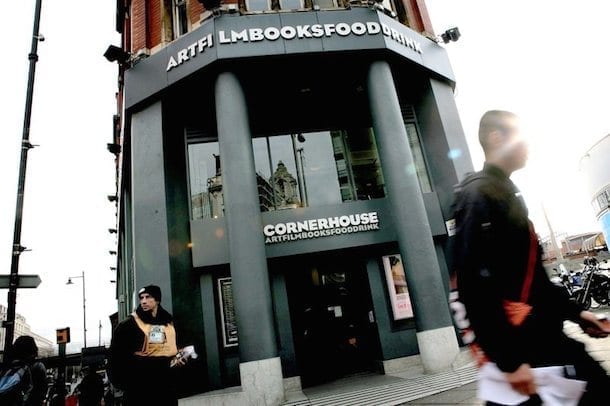 Manchester has traditionally been best known as the first industrialised city in the world and celebrated for its new discoveries, scientific breakthroughs and technological developments.

But there’s more to Manchester than science and technology. Manchester’s got culture, too.

The Cornerhouse is one of the city’s true gems. It’s been the throbbing heartbeat of Manchester’s cultural life for nearly 30 years and is now visited by half a million people a year. With three floors of art galleries, three cinemas, a bookshop, a bar and a café bar, it’s a rarity in the modern world; a place where substance lords it over style. Geek over chic.

We love the Cornerhouse. And If you love the Cornerhouse as much as we do, you’d better make the most of it in its current form. Next spring it’s moving to a posh new purpose-built centre called Home which will have two theatres, gallery space, five cinema screens and a café bar and restaurant.

1. It’s a beacon of hope for independent cinema

In a world dominated by blockbuster hits and movies focusing more on special effects than solid plotlines, independent cinema is a beacon of hope for film-lovers. the Cornerhouse has always (and will always, we hope) support indie films. Any day of the week the cinema’s listings are full to the brim with choice movies from arthouse to world, offering a haven for real film lovers rather than your average “He’s Just Not That Into You” and “Transformers” audience.

Where else can you see some of the finest Spanish-language films? The ¡Viva! Spanish and Latin American Film Festival is an annual nicety celebrating some of the most acclaimed films en español in the world. This is a chance to expand your cultural and lingual horizons and introduce your mind to an array of new cinematic delights.

3. Danny Boyle is a patron

Need we say more? What does the master of British screenwriting and directing have to do with Manchester’s own indie venue? That’s a very good question. He is a patron of the cinema, meaning he endorses it. Well, if it’s good enough for Danny, then it’s probably good enough for us. Two other patrons are fairly well known as well. Ever heard of Damien Hirst and Dame Helen Mirren?

The Cornerhouse gallery was the first UK venue to commission work from offbeat artist Damien Hirst. As a man at the forefront of weird and wonderful exhibits, Damien is either a legend or an extremely talented con man. Regardless, without The Cornerhouse, this guy might not have been given the platform to cut cows in half and call it art. Now, where would we be without that?

If you love independent film, chances are you’ll also love books. There, I just pigeon-holed you for life but try and deny it. There’s something about indie film lovers that makes them book readers, too. Maybe it has something to do with concentration levels, but I won’t speculate further than that in case I offend anyone. The bookshop has a phenomenal collection of books on galleries and visual arts. You’d be hard pressed to find these extra-specialist publications in a high street bookshop.

With four stars on Tripadvisor, the Cornerhouse Cafe is one of the best cafes in Manchester. You can search your whole life for the perfect cup of coffee with that not-too-bitter-yet-still-strong taste and never once sup from a superior cup. But at the Cornerhouse Cafe you are guaranteed a quick buzz of pure caffeinated bliss. Plus if you take along your laptop you get extra cool points from passersby who assume you are a scriptwriter or poet.